From the heat to the cold

We weren’t the only ones who chose to spend Christmas 2018 in Boquete. As it turned out, Boquete is the place you go up to, for weekends and holidays. During Christmas, it is not only weekend tourists from the nearby, and somewhat large town, David. Many Panamanians and expats living in Panama City spend the holidays in Boquete.

Why do people go up to Boquete? Yes, you go up to Boquete. And you do that to get away from the lowland heat to “cool down”. Because of its elevation, some 1200 metres above sea level (m a.s.l.), its climate is cooler and much more pleasant than that of the lowlands (unless, of course, you prefer a sweltering heat!). It is not exactly cold, but cooler, especially in the evenings.

The location and the climate also mean that there is a large community of expats in and around Boquete. This is possibly also why Boquete boasts a very active cultural life with cafés, restaurants and music – for example, the annual Boquete Jazz & Blues Festival, being the second largest jazz festival in the country after the Panama City Jazz Festival.

And finally, a four-lane road from David makes it easy to go from the lowland and up to the Boquete valley.

Of course, there are also many who come to get out into nature and experience the beautiful landscape around the nearby Volcán Barú. The volcano is the tallest point (3475 meters) of land in Panama. For many people, “experiencing nature” appears to mean taking selfies and family portraits in front of a waterfall. 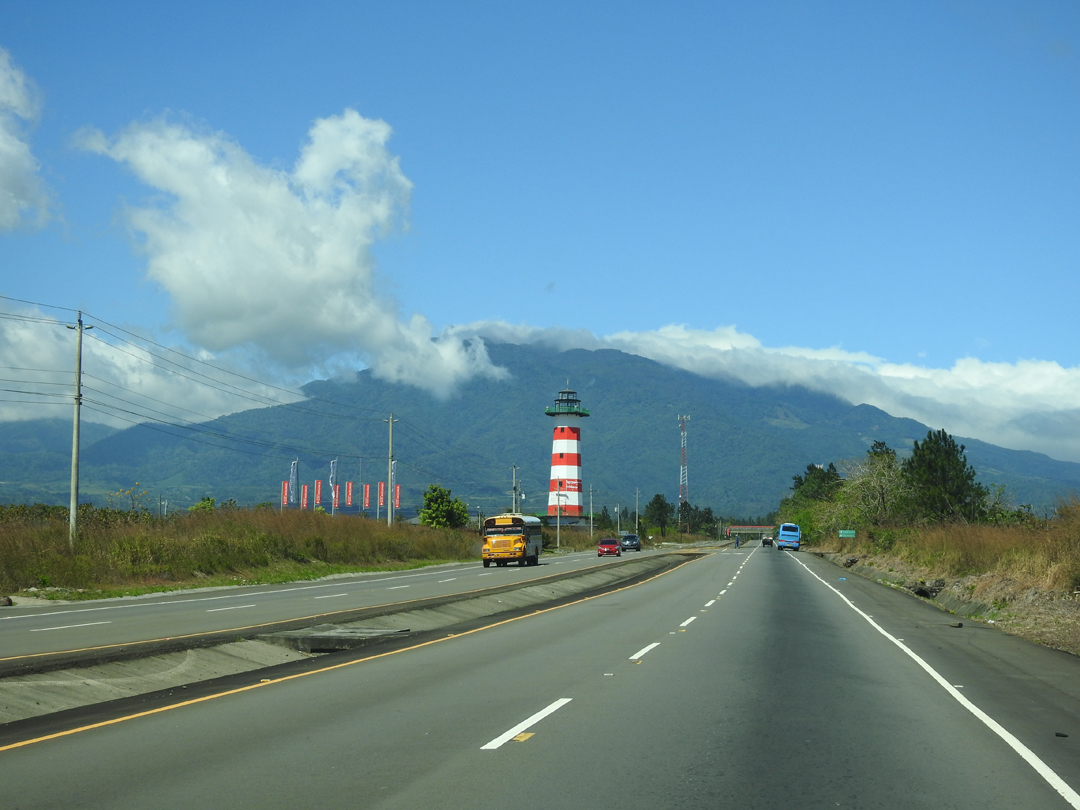 It is easy to get to Boquete – take the four-track road from David heading north and when you see the lighthouse you are almost there. Via Boquete, Panamá.

The altitude was also the reason why we went to Boquete for Christmas, but not to cool down. Though 35-37 degrees Celsius as we had down in the lowland is rather more than what a couple of Scandinavians are used to. But Boquete is a great starting point for seeing highland bird species. And some of the species can only be found in western Panama and neighboring Costa Rica – so-called endemic species. Actually, it would be more correct to call them regional endemic, or near endemic, but that is for another time.

Boquete’s altitude is also in the transition zone from foothills to highland and that results in a mix of species from both ecosystems and as a result, it is an excellent and very interesting area for bird watching. 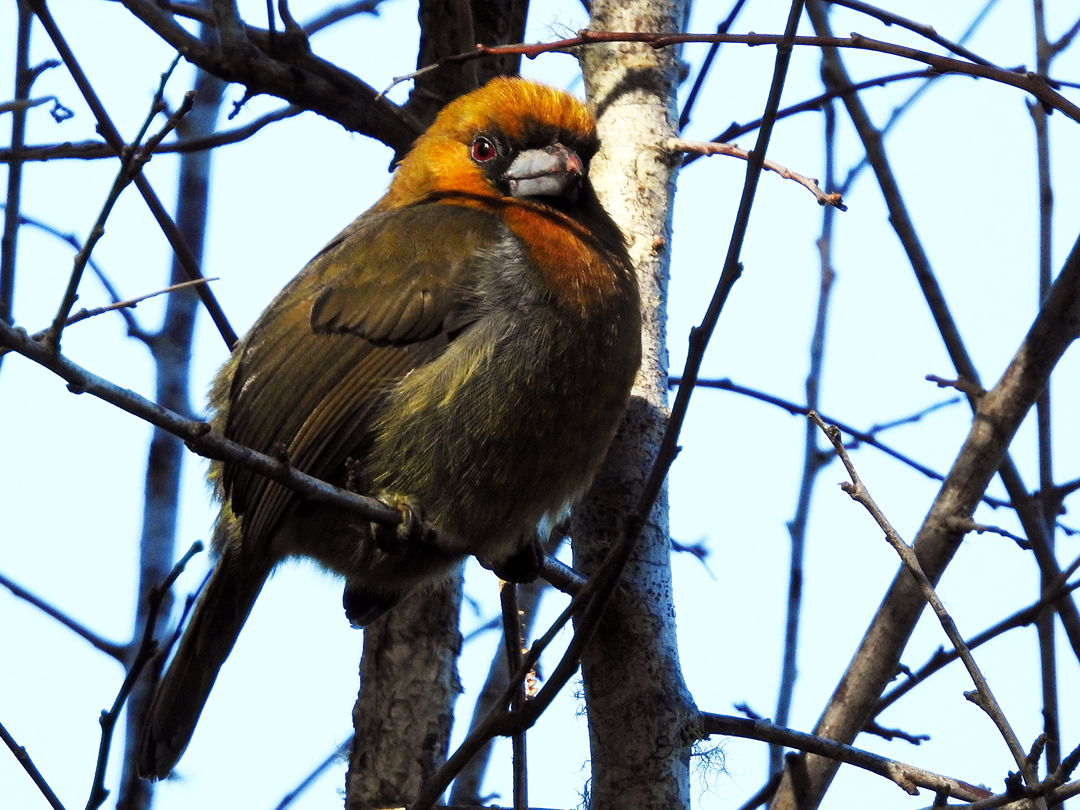 Prong-billed Barbet has a very limited distribution. The species is found in cloud forests on the Caribbean slope of Costa Rica and Western Panama. Sendero Los Quetzales, Boquete, Panamá. 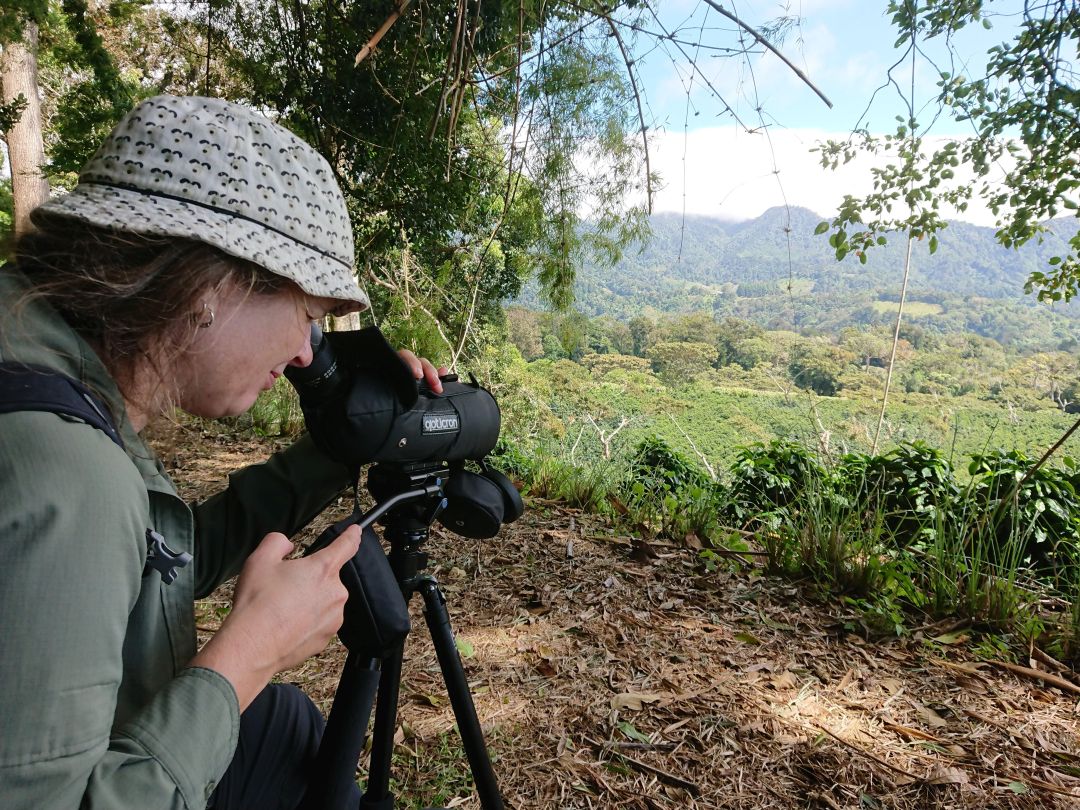 It takes patience to check out all the trees of the valley. Finca Lerida, Boquete, Panamá.

It was, as mentioned above, Christmas. This year our Christmas was a little different, as we were far from home – without our families and the traditional Christmas visits and Christmas dinners. On the plus side, there was no Christmas traffic and we could pass the time looking at birds. It later turned out that we weren’t quite rid of the Christmas traffic after all.

On Christmas Eve we were birdwatching near Tinamou Cottage Jungle Lodge where we would spend Christmas. It is a really nice place that used to be a coffee plantation. Now it is run primarily as a lodge and guide company by the Dutch owners, Hans and Terry, but they still grow coffee on parts of the property.

Terry is a birder and bird guide and naturally she knows which species that are recorded on the property. With a list of 199 different species, it seemed like a good starting point for discovering the birds of western Panamá.

We stayed in the cottage The Great Tinamou, where we could enjoy sunrise with coffee and breakfast on the balcony. Coffee and breakfast are delivered daily in a basket at the front door, all we have to do is sit and enjoy the birds. There were among others Lesson’s Motmot, Rufous-tailed Hummingbird, Buff-throated Saltator and Clay-colored Thrush, and we also saw Red-crowned Ant-Tanager.

A couple of times we saw Lance-tailed Manakin from the cottage, and very appropriately we also heard tinamou – though it was Little Tinamou. 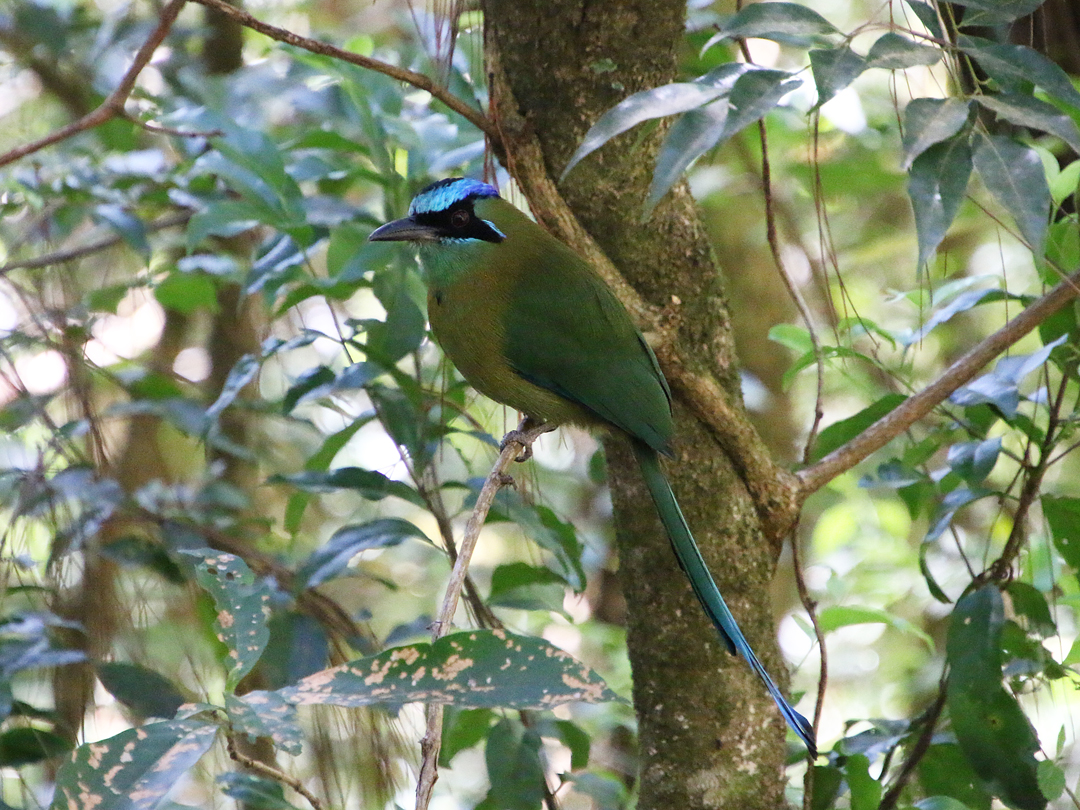 Every morning, this Lesson’s Motmot would perch beneath our balcony. Tinamou Cottage, Boquete, Panamá. 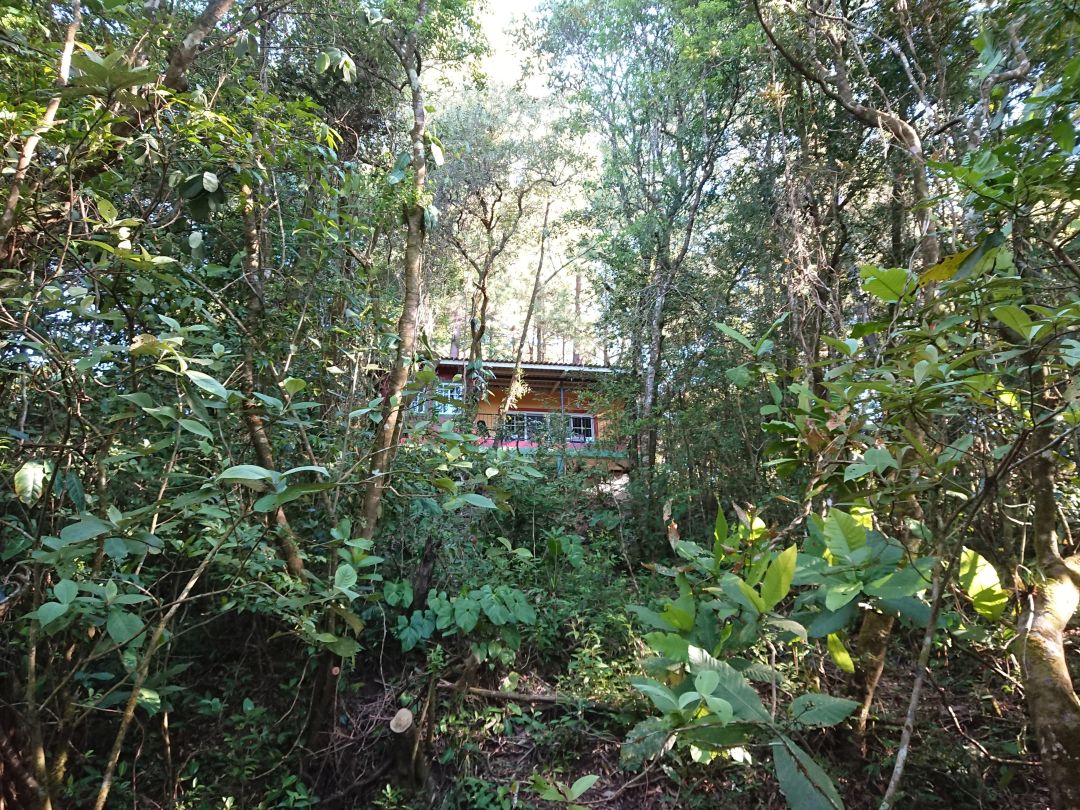 There were many birds in the “garden” and especially two places were great. One of them was right in front of the main building where you could quickly see many tanagers, thrushes and woodcreepers. The other place was a small clearing by one of the trails. Here there were many Tennesee Warblers, but also Black-and-white Warbler, Wilson’s Warbler, Yellow-throated Vireo, Yellow-bellied Elaenia, Streaked Saltator and a beautiful male hummingbird Magenta-throated Woodstar.

We also saw a Becard, which we initially identified as a One-colored Becard because of the plumage’s combination of two colors – black and cinnamon. But that’s two colors? Yes, that is correct, as the attentive reader has already noticed, the male One-colored becard changes appearance from a cinnamon colored juvenile plumage to a black adult plumage. Meaning that the males are actually two-colored for a time, and that was a very good identification criterion when we were in Ecuador.

But the One-colored Becard doesn’t live in Panamá, so it had to be a different species! The only one that seemed to match was Rose-throated Becard. But this species isn’t common to the area and it wasn’t on Terry’s list either – but none of the other becards fit the description. Luckily we managed to get a couple of photographs – they won’t win any prizes – but enough to be able to document it and to be able to check the species with Terry.

Terry wasn’t in doubt when she heard our description and saw the pictures. She was very pleased with our observation, because not only was it a new species for Tinamou Cottage, it was species number 200.

We saw the becard again the next day, and later it was also seen by the two Canadian birders Angela and Kent. Fortunately it “hung around” for a while, because we have later heard from Terry that she has seen it as well. 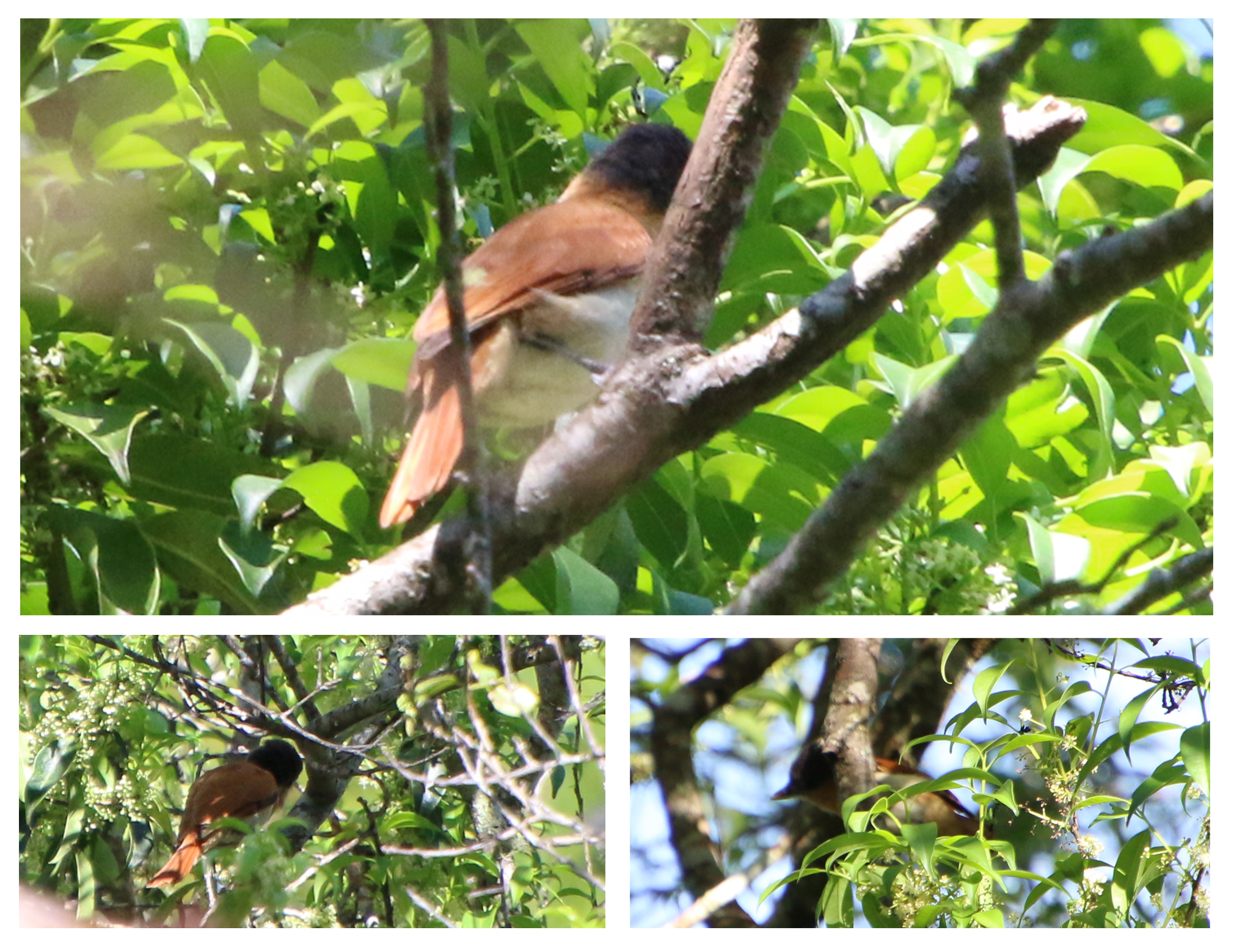 We saw Christmas traffic, but not the parade

As mentioned previously, we didn’t quite avoid the Christmas traffic. We got stuck in the middle of it on Christmas Day. We were on our way to Boquete together with Angela and Kent to eat at a restaurant the served a Christmas buffet. As we approached the four-lane road we noticed that there were quite a lot of cars. We drove onto the road and right into gridlock.

We were surprised by all that traffic. What was happening, had there been an accident, was there road work ahead or had everyone else just gotten the same idea as us?

We had to devise a new strategy. Bente, Angela and Kent started looking for alternative routes down smaller roads. I got the car turned around so we could go another way round to Boquete.

It was an exciting drive along a road where high clearance and four-wheel-drive was a great advantage. We didn’t have either but still managed to get to the restaurant. Parked the car and we got a seat at a table surprisingly short time of waiting and we celebrated Christmas with our new friends.

The Christmas buffet consisted of what you might call traditional Christmas dishes, there were scalloped potatoes, roast meat and a cream dessert. It was certainly more Christmassy than our humble dinner Christmas Eve – Fusilli pasta and tomato sauce from a can.

Rosevelt, our waiter explained the reason for the traffic chaos. He had previously worked on a cruise ship, which clearly showed in his mannerism (not that I have been on a cruise ship but I can picture it in my mind). But the explanation was the annual Christmas parade in the city, which is a crowd-puller for Panamanians from near and far

We probably should have been prepared for the big Christmas parade in Boquete. Earlier in the December, we had actually read about it in the local weekly for the expat-city Ciudad del Saber.

The actual parade we didn’t see and the drive back to Tinamou Cottage was an even more bad road which on the map looked fine! 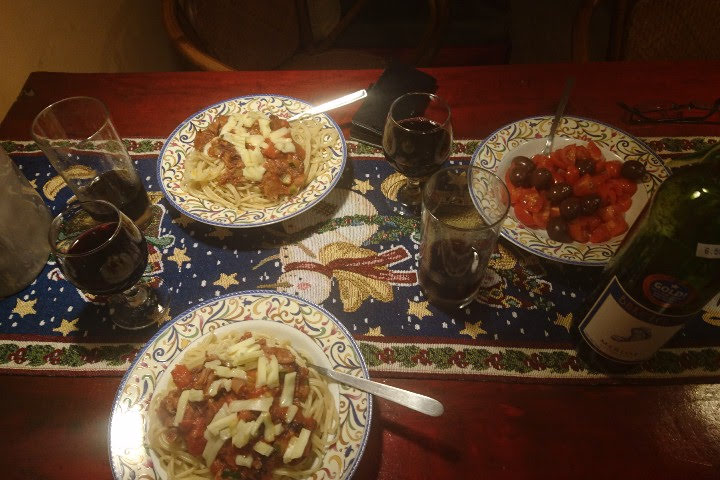 On Christmas Eve we got the barely traditional Christmas menu Fusilli pasta and tomato sauce from a can. 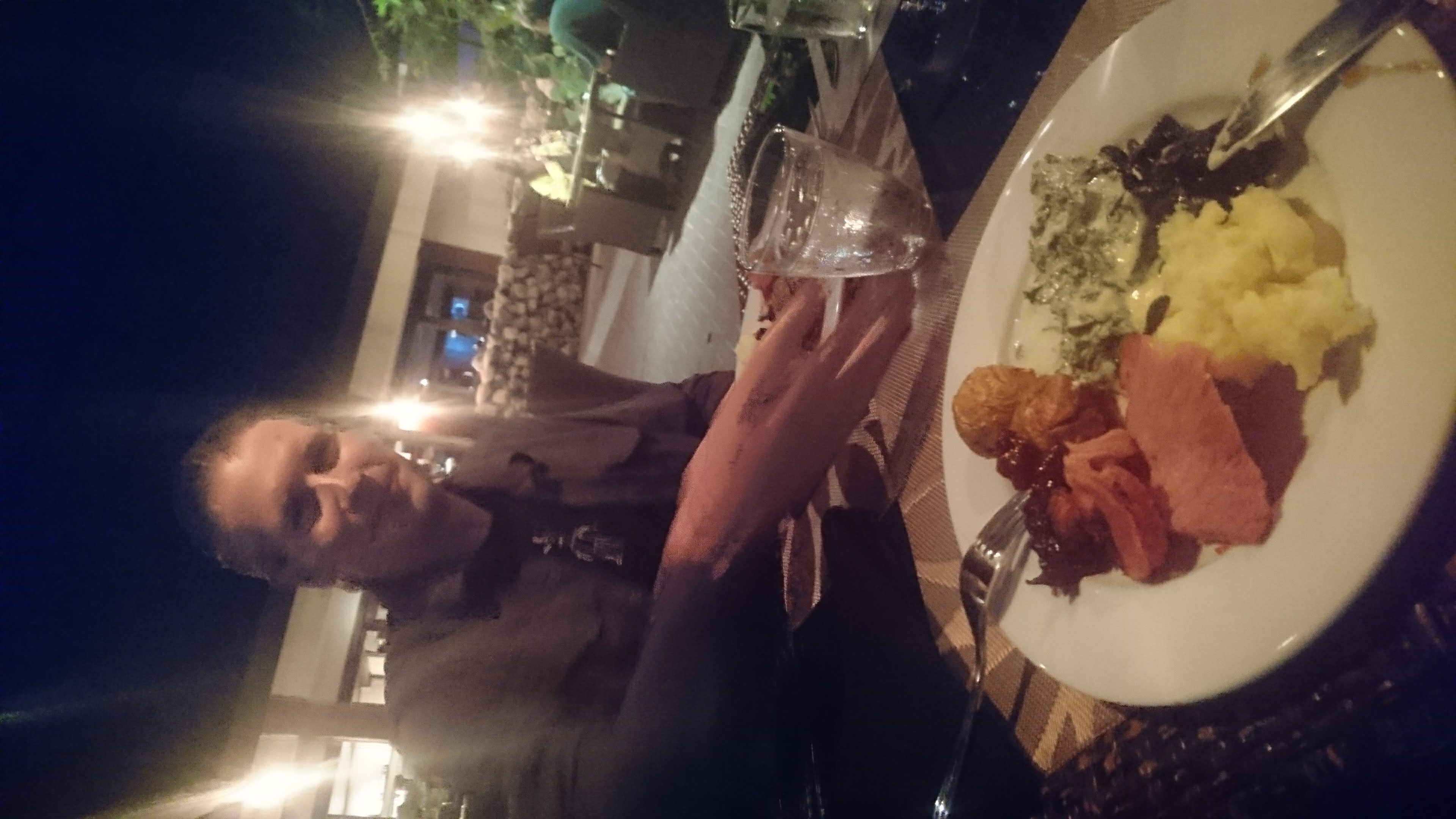 We enjoyed the evening on Christmas Day in good company with Angela and Kent. The menu was a more traditional American-panamanian Christmas buffet with all what belongs. Boquete, Panamá.

We can highly recommend visiting Boquete and spending some days there. Bird-wise there are some good sites that are close to each other and which we visited more than once.

Sendero Los Quetzales in Parque Nacional Volcán Barú is a must. The trail runs between 1800 – 2000 m a.s.l. and passes through cloud forest (one of our absolute favorite habitats). You don’t have to walk the whole trail, which will bring you all the way to the western side of Volcán Barú. Weather permitting, there is plenty to see the first 3-4 kilometres. But it can be very foggy, wet and windy. 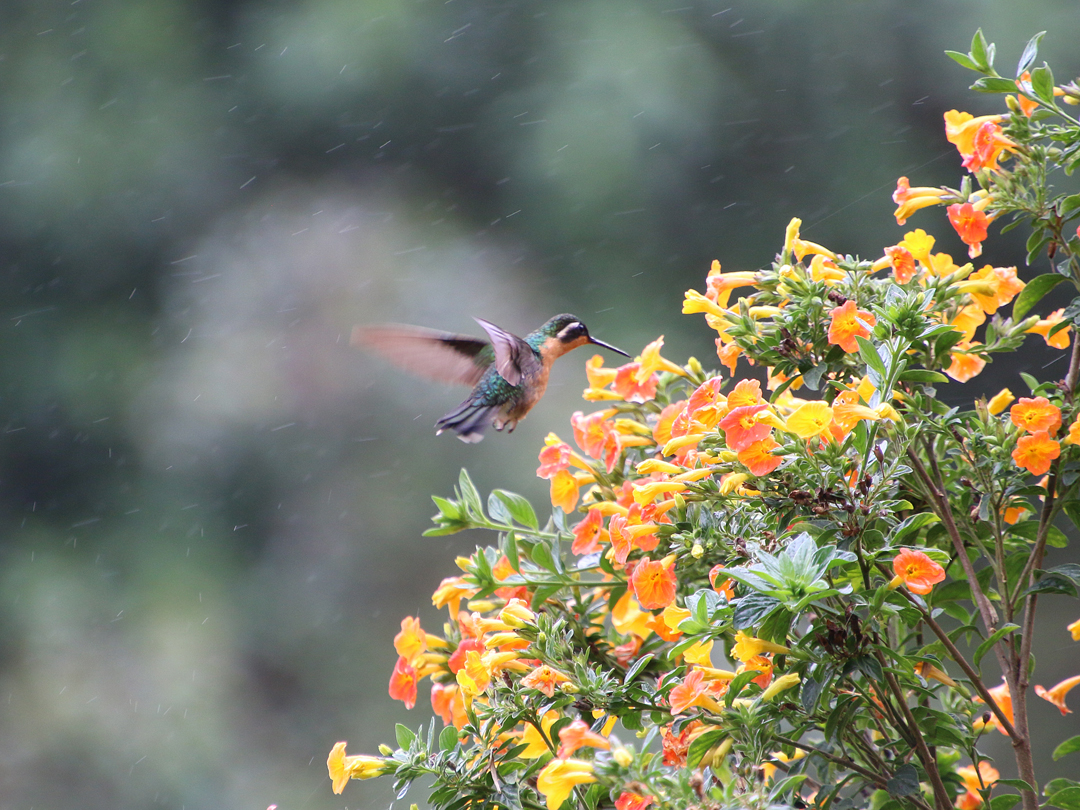 A White-throated Mountain-gem foraging in the rain at the entrance to Sendero Los Quetzales. Boquete, Panamá. 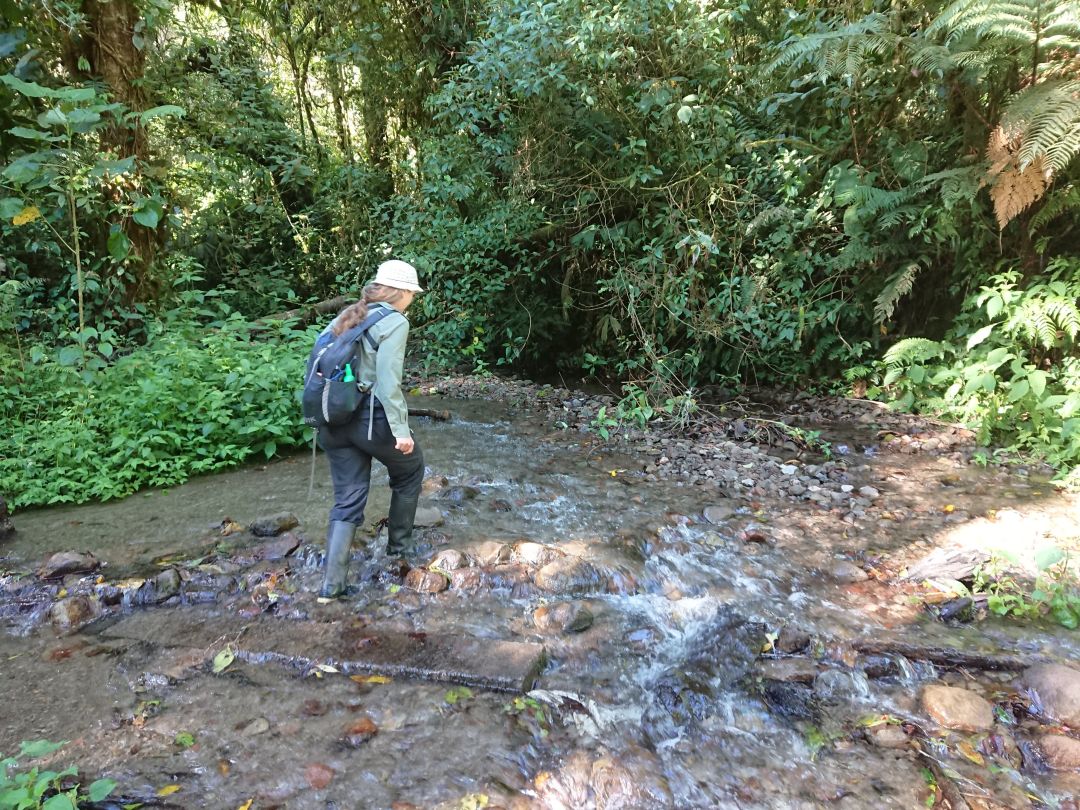 Another good place is Pipeline Trail (not to be confused with Pipeline Road near the Panama Canal), which is situated a little lower (approx. 1600 – 1900 masl) and is not as windy as Sendero Los Quetzales can be. Pipeline Trail is probably the best place to find Resplendent Quetzal. The area is privately owned and entrance is 3 USD.

We saw Resplendent Quetzal twice. The first was a male, the second a female, but we spent quite a lot of time before we succeeded. But we also saw other interesting birds like Green Hermit, Lesser Violetear, Red-faced Spinetail, Mountain Elaenia, Yellow-winged Vireo, Elegant Euphonia and Flame-throated Warbler and Ornate Hawk-Eagle. 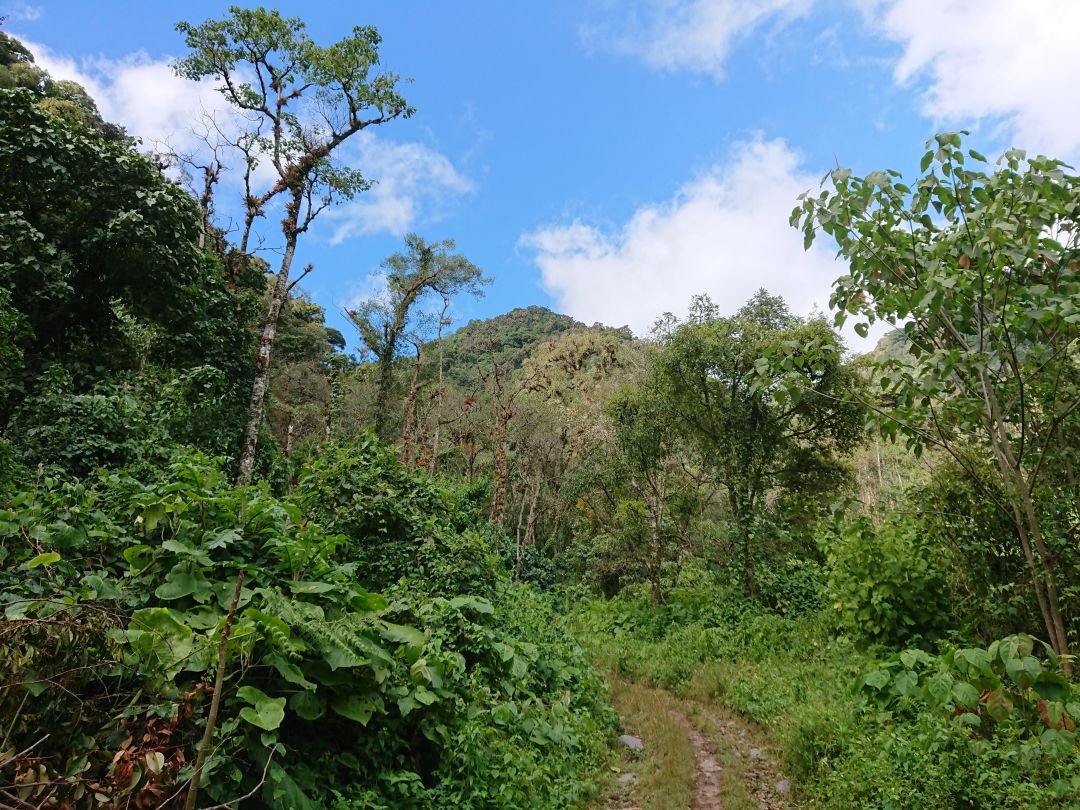 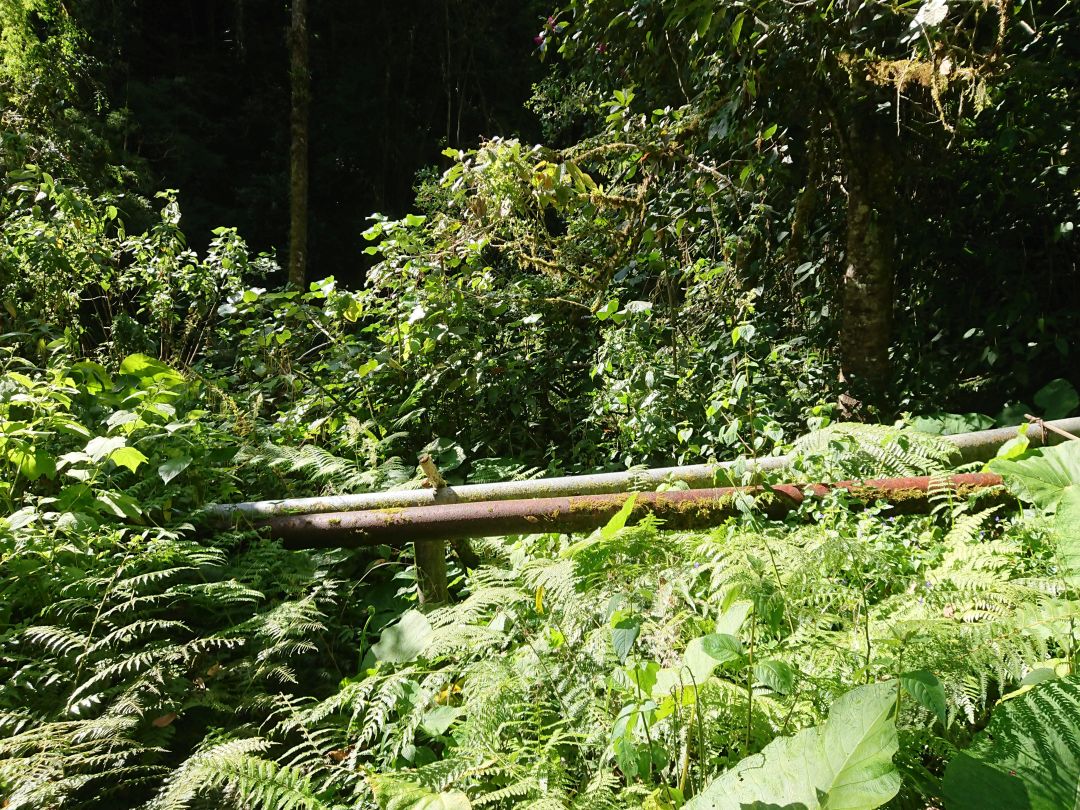 The pipelines that have named the trail. Pipeline Trail, Boquete, Chiriquí, Panamá. 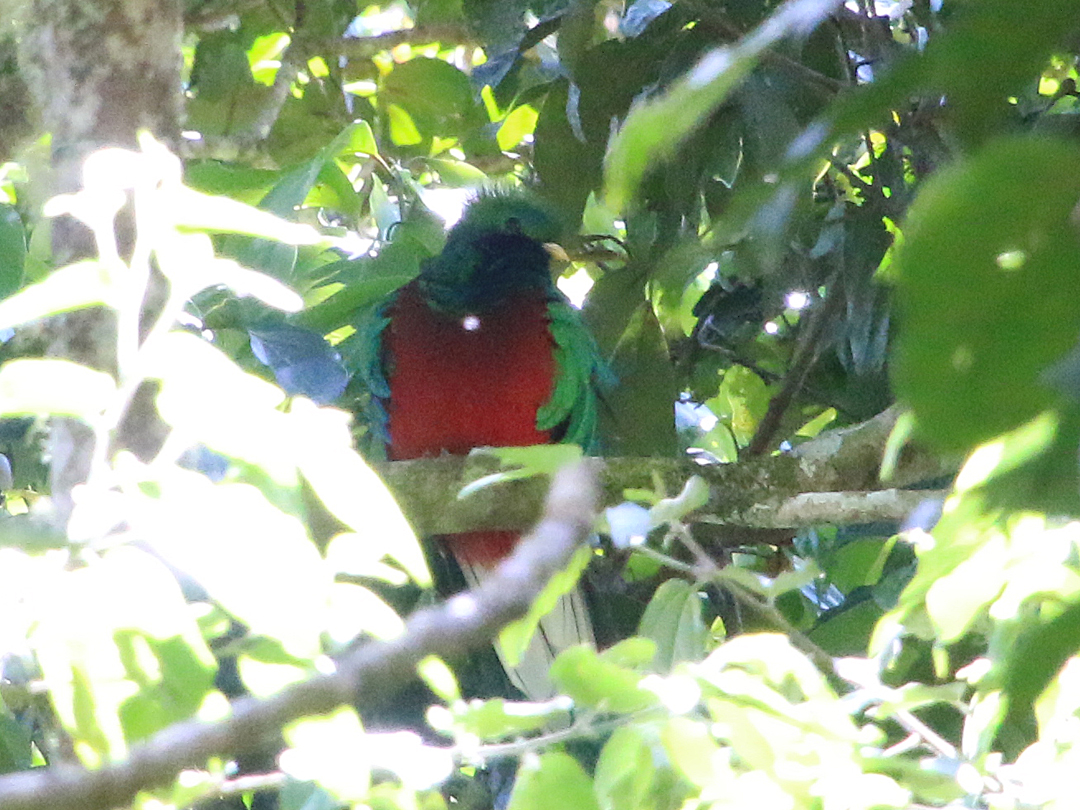 Shortly after we had given up seeing Resplendent Quetzal, Bente spotted this beautiful male on our way back. Pipeline Trail, Boquete, Panamá.

Finca Lerida is both a coffee farm and a hotel, and a great site for birdwatching. You don’t have to stay at the hotel in order to go birding there. For 12 USD per person, or if you eat at the restaurant, you can use the trails that run through the coffee plantation and rainforest at 1700-1800 m a.s.l.  A visit here can quickly take 5-6 hours.

We didn’t see Resplendent Quetzal at Finca Leridahere, though it can be found in the area. However, we did see Long-tailed Silky Flycatcher. And also Red-headed Barbet, Dark Pewee, Brown-capped Vireo, Ochraceous Wren, Black-faced Solitare, Ruddy-capped Nightingale-Thrush, Common Chlorospingus, White-naped and Chestnut-capped Brushfinch.

There are many hummingbirds near the hotel, including the tiny Scintillant Hummingbird, Lesser Violetear and Rufous-tailed Hummingbird.

And we could go on about the birds in Boquete. 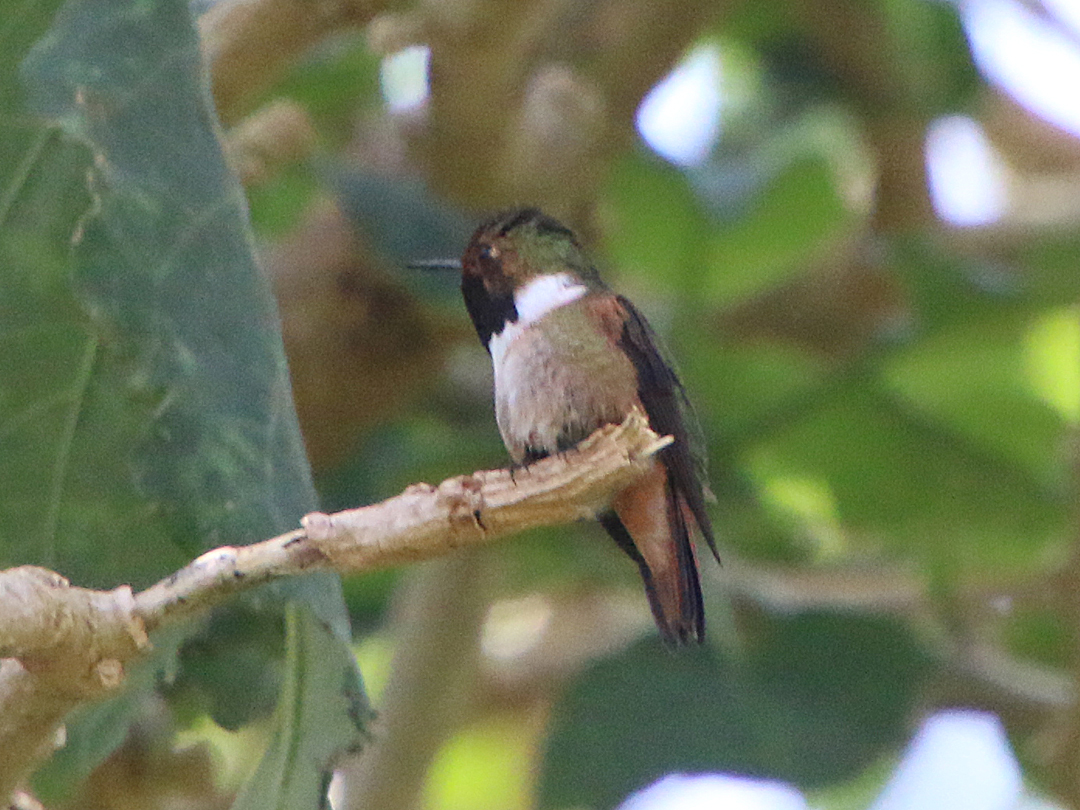 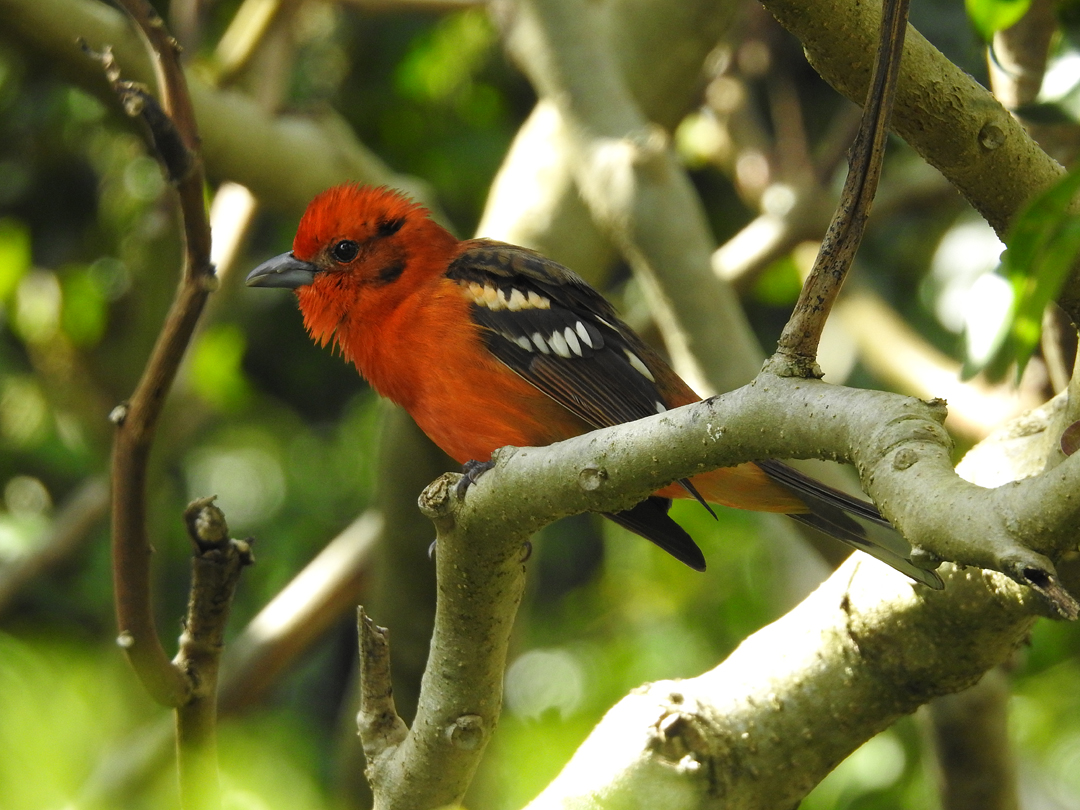 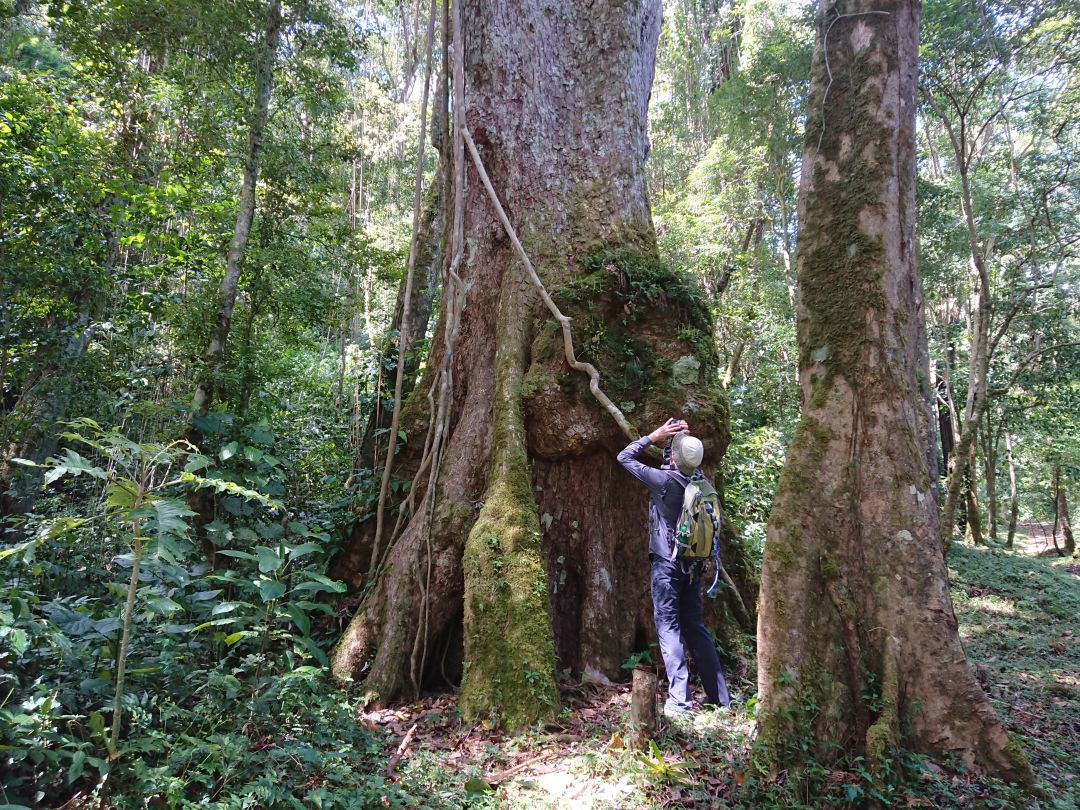 2 thoughts on “Birding Boquete – Quetzals, a Becard and Christmas traffic”