Drive-through may not be the correct term as we drove in, the same way as we drove out of the Everglades. We only had a few hours available so our visit to the famous Florida National Park was brief.

We drove about 16 km from our hotel in Homestead to Ernest F. Coe Visitor Center. The first birds we saw in the national park was a little flock of American Redstart. There was also a beautiful Yellow-throated Warbler foraging in some trees. At the Visitor Center we got some tips on where we could see some birds as we only had a short time and would like to see more than just herons. 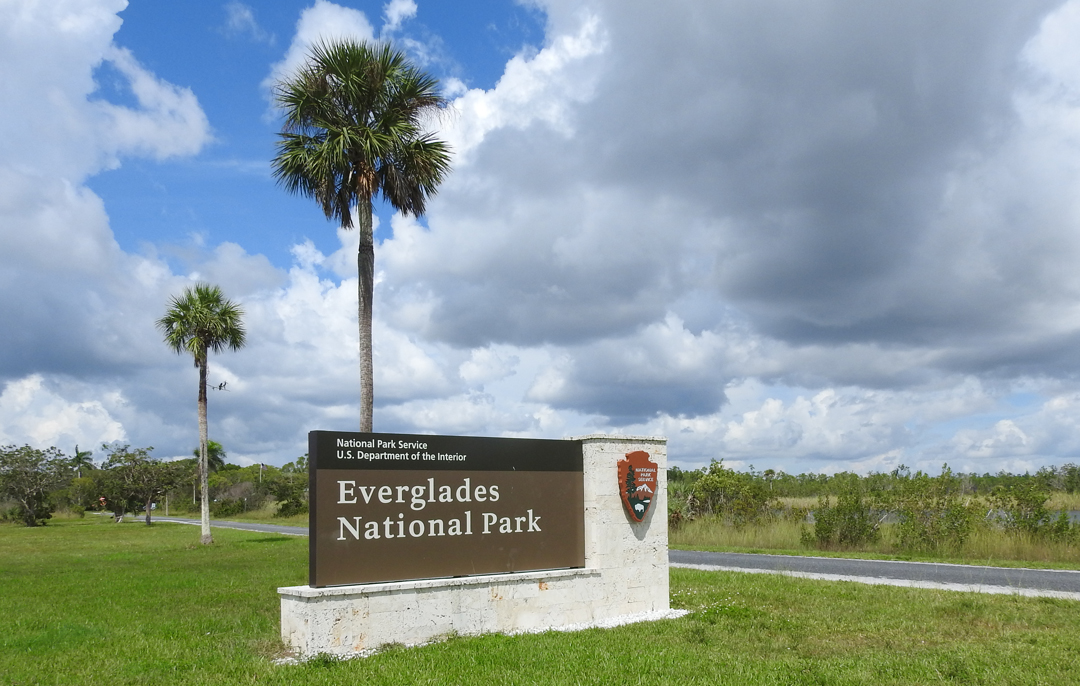 After passing the payment station and paying 25 $ we drove into Everglades National Park. 25 $ sounds like a lot, but since the ticket is valid for seven days it’s really okay. On the other hand, it’s expensive for only three hours, which was all we had time for! At least the money goes to a good purpose – to maintain the national park.

It was not far to the Royal Palm Visitor Center, where we were recommended to drive to, as there were a few trails we could follow. In the morning heat we chose to go for a walk on the Anhinga Trail. It is a very nice and easily accessible trail with a boardwalk that leads the visitors on a small round trip through the swamp. 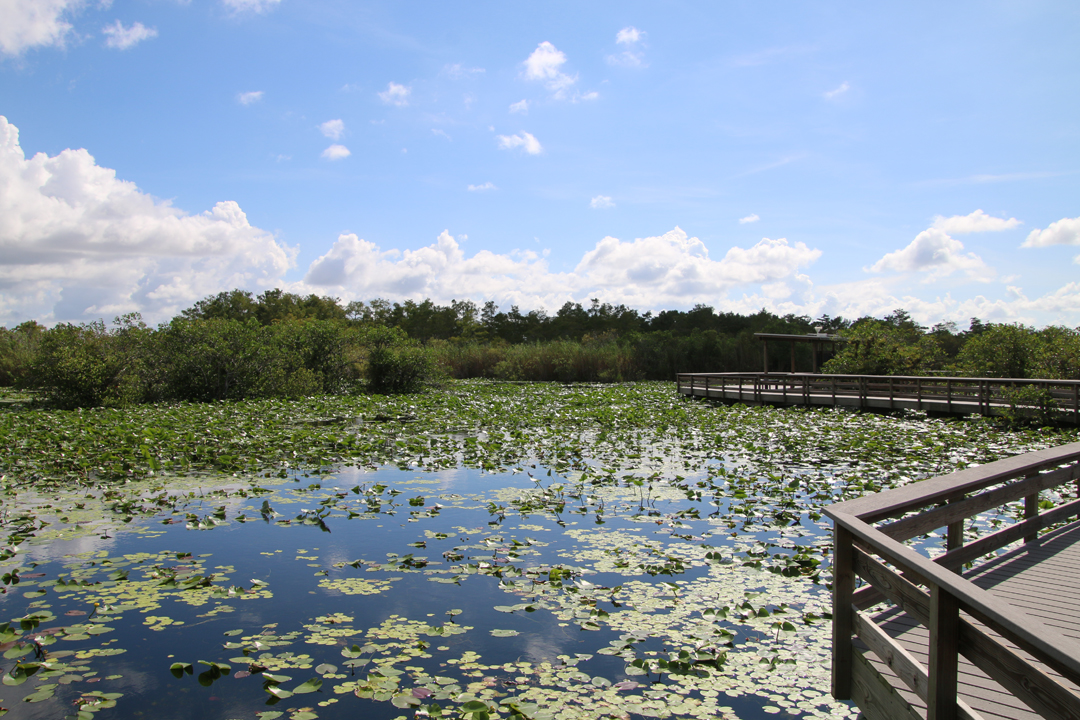 The Everglades and Florida are known for alligators. In the national park there are also a lot of signs with warnings and recommendations to keep a good distance to the alligators. Stick to the middle of the trail and maintain a distance of at least four and a half meters to alligators! We had no plans for close encounters – at least not of the gator kind – but we hoped to get to see some alligators.

Keep a distance to the alligators. Anhinga Trail, Everglades Nationalpark.

Close encounters of the gator kind

Turns out it is quite hard to stay more than four and a half meters from the animals when they choose to lie along the trail or even on it!

The first one we met was lying down (maybe just relaxing) right next to the trail, so even if you walked in the middle of the trail, you could not keep the safety distance. After a couple of quick pictures, we carefully hurried on, only to run into another one just a little further ahead. It had chosen to rest more or less on the path itself. This makes it really difficult to comply with the safety advice. Furthermore, the alligator decided shortly after that it wanted to go to the other side of the trail.

Alligators rest, where ever they want. Anhinga Trail, Everglades Nationalpark. 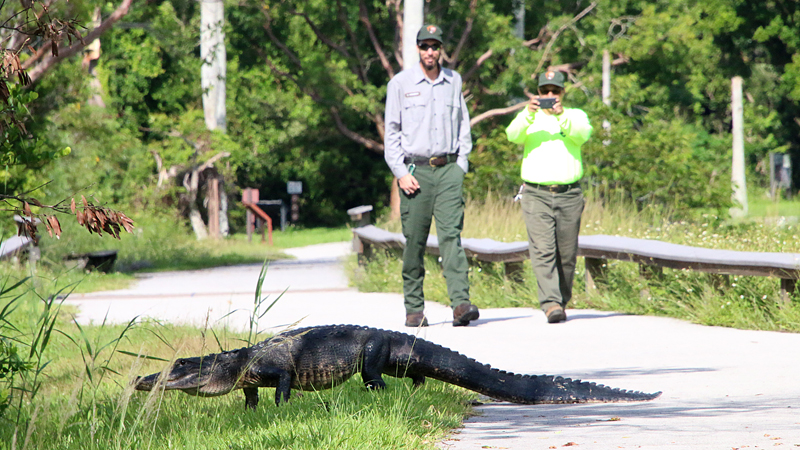 Along the way, we met two park rangers who were out to count alligator babies. One of them had seen 14 baby alligators close by, the day before. They were very nice and talkative and happy to answer our questions. They told us that if you discover a baby alligator it’s always a good idea to first check the surroundings to see where the mother is. She stays with the babies and defends them. We were also told that “the Gators are spread all over” due to high water levels in the area.

Soon after, we thanked the ranges for their time and continued. But after no more than 20-30 meters, Uffe spotted a couple of small, sweet and cute alligator babies next to the trail.

We did as we had just been told but could not see any mom. We grabbed the two park rangers and told them we had found some babies.

Together we stood and looked at the babies, who could be heard making some discreet noises. The two rangers went closer and began to take pictures with their cell phones and were annoyed as they had not taken a real camera. They were joking about who would have to get closest, in order to get some good pictures, and then we discovered the mother! It was in the water, only the top of her head above the surface – with a baby sitting on top. 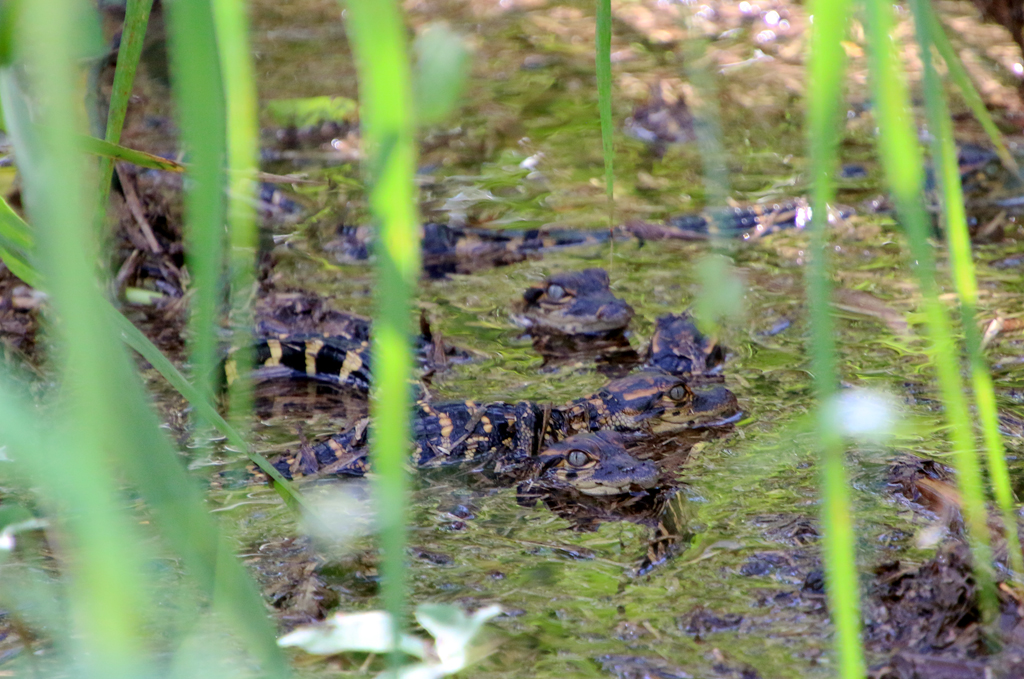 It was really exciting to see and be so close to something this fascinating. But at the same time it was a reminder that you should always be aware, which was further emphasized when the adult alligator even gave a “smack” with the jaws as if to day, “stop! – no further!”

We also saw a few birds during the morning. Because of the heat and as it was still early in the autumn migration of the birds, there weren’t that many. The most interesting were a very pretty Blue-gray Gnatcatcher and a beautiful White-eyed Vireo. A character bird was the Great Egret that was seen everywhere. There were also several Eastern Kingbird and finally, when we had just left The Everglades and began the trip to the airport, a majestic adult Bald Eagle. 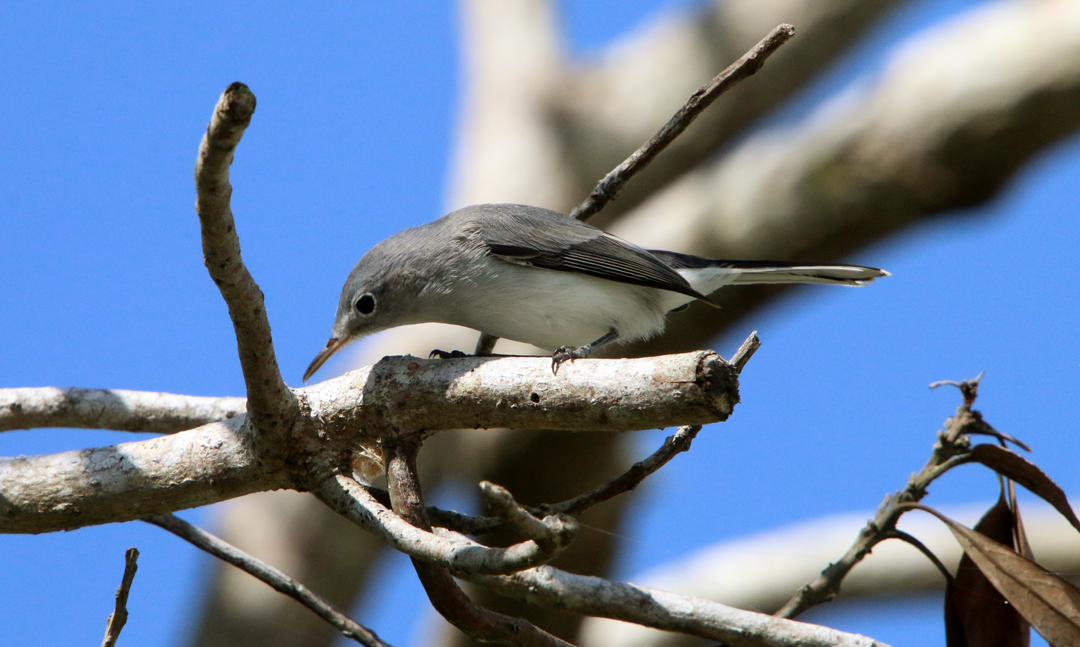 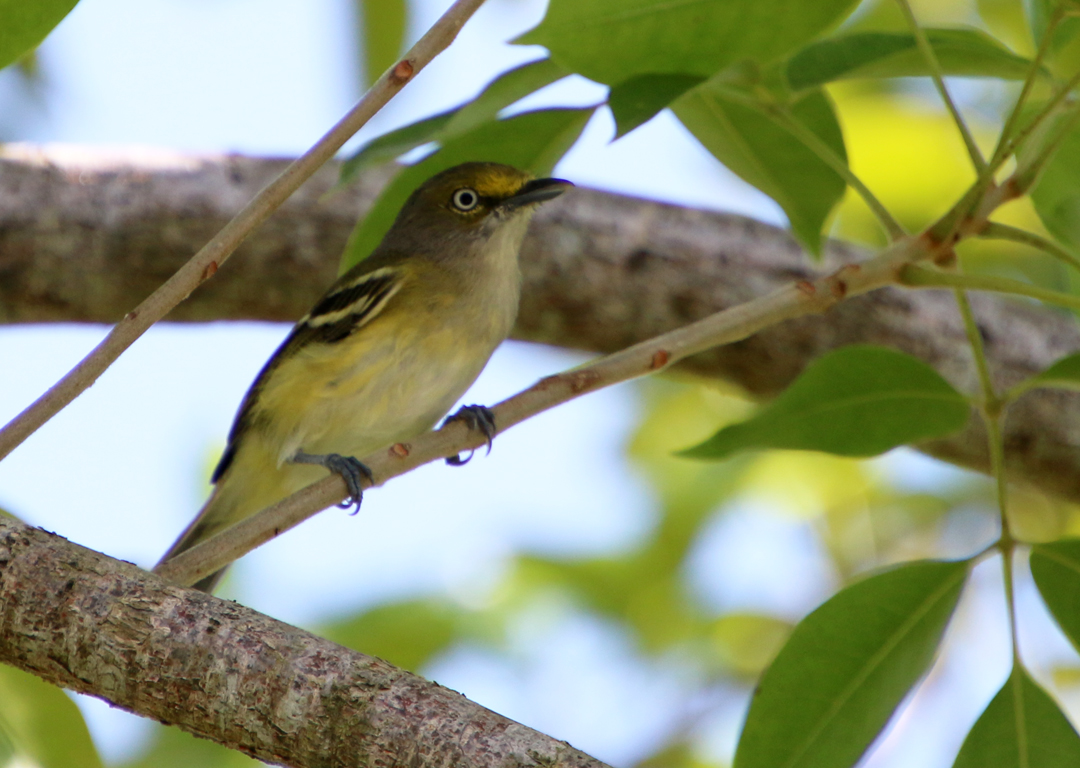 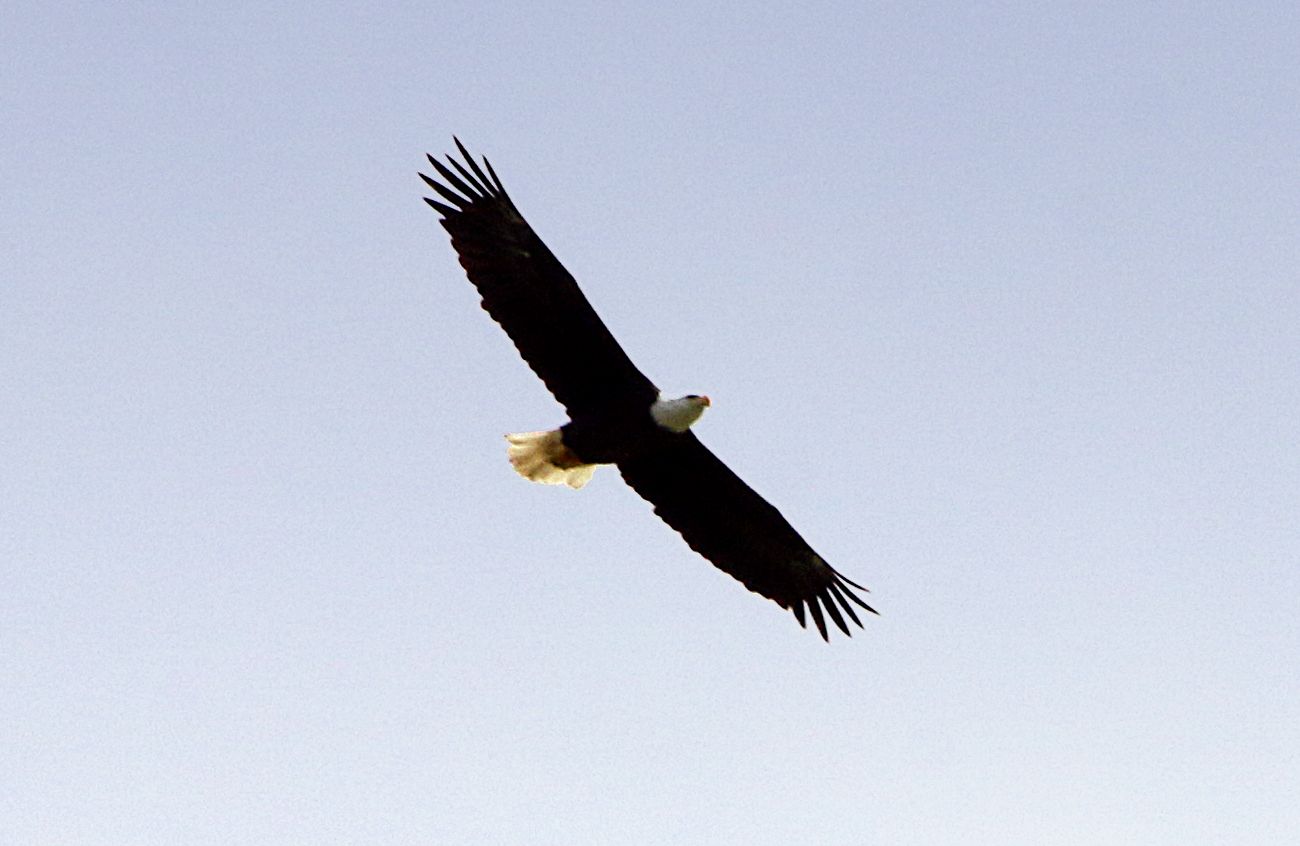