It has been 14 days since we arrived in Ecuador. Time flies – at least that’s how we feel. That is because there is always something happening. We experience a lot, everything is new and different – and, as you know, we are also back in school! But more about that later. We do not have time for reading a thick book or relaxing with telenovelas on the TV (but then again, we do not have a TV). As a result you have had to wait until now for the first blog post from Ecuador.

However, we have not been maintaining a complete “radio silence”, as you know if you are following us on our Facebook page Albicilla.

Late and exciting arrival in Quito

Our flight from Florida (USA) arrived late in Quito (the capital of Ecuador). We got our baggage and got through immigration and were met in the arrivals hall by a lot of people with signs with the names of the people they were waiting for. But Nelson, who was supposed to pick us up and bring us to our host family in Quito, was not there!

What do you do then when you are in a foreign country at midnight, you do not speak the language and you are tired? After thinking about it for a minute, we were persuaded to get a lift with a man who – according to himself – had been waiting in vain for two hours for someone else. He had already helped us call Nelson, who was at home somewhere in Quito, and it would take at least 45 minutes before he could be at the airport. As it would take about the same time to drive to Quito, we chose to “take the chance” because if we didn’t, it would be at least 3:00 AM before we arrived – and we were supposed to start our Spanish lessons at nine in the morning.

Luckily, it turned out that our new chauffeur was very nice and talkative and he was also a guide, so he could arrange all sorts of things for us. But his car was very old and small and for most of the trip from the airport, the speedometer did not work. 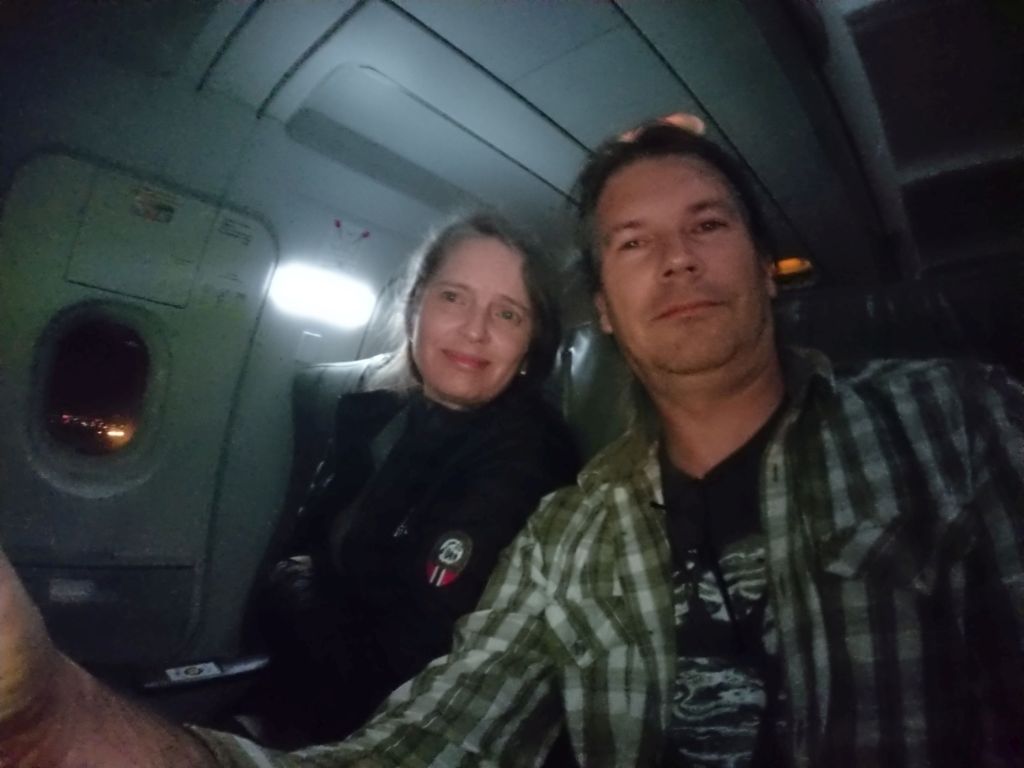 It was Gabriela who opened the door, and despite the late hour and the fact that we had woken her up, we received a very warm welcome. As we were very tired we declined the offer of something to eat and a shower.

We met the rest of the host family the next day. In the morning we met Gabriela’s mother, Eulalia – or “Mami” as we call her, and she made sure that we got something to eat before we went to school. Later in the day we also met Gabriela’s brother Jose Ricardo.

It is a great pleasure to live with the Cazar family. They have been very welcoming and they are incredibly sweet, always happy, laughing a lot and are very helpful. One of the days, Gabriela took us to a very interesting equipment store, so I could buy some rain trousers (the pair I was supposed to have used were apparently still on Møn). Afterwards, we took her for a beer at one of the local bars, of which there are many, in the Mariscal district where we live.

That same evening, we experienced real family entertainment. Gabriela’s boyfriend Mario was visiting, and as he is a musician, the evening ended with him playing guitar and we heard all the sad Ecuadorian songs. “Mami” knows all the songs, so there was singing and dancing. 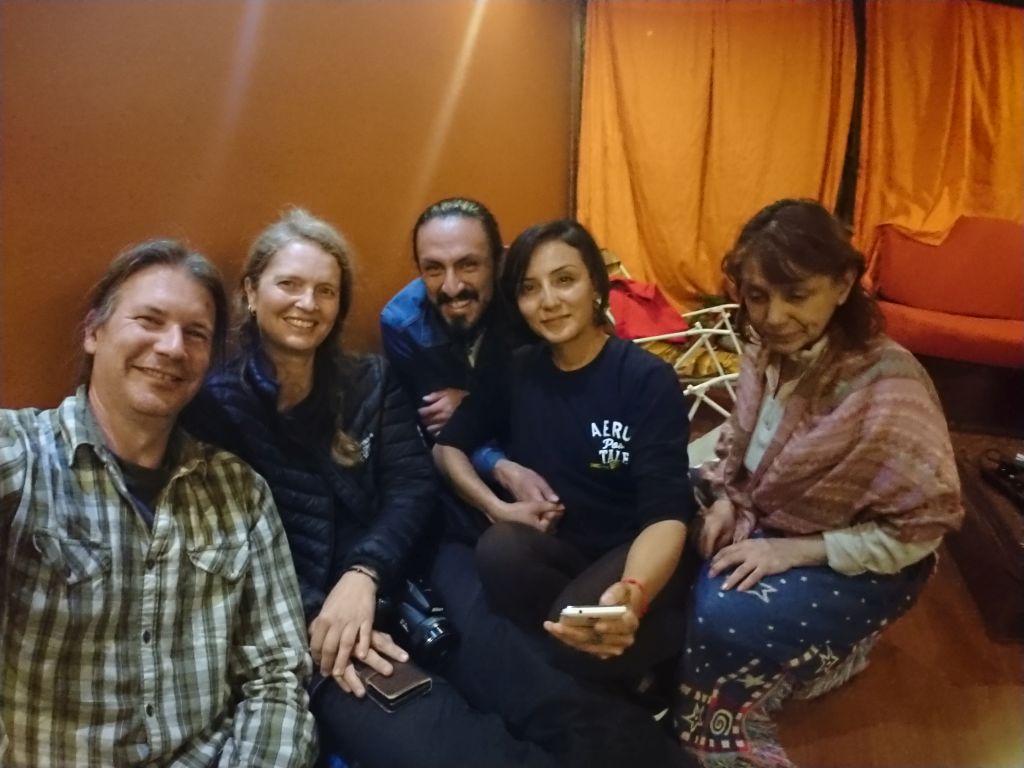 One evening they took us to a market in the La Floresta district, where there was a really nice and cozy atmosphere with food stalls and music. Here we were introduced to many traditional dishes created by the indigenous population. Many long stories could be told about it, we are not sure we fully understood all the stories we heard, but some of it we understood. 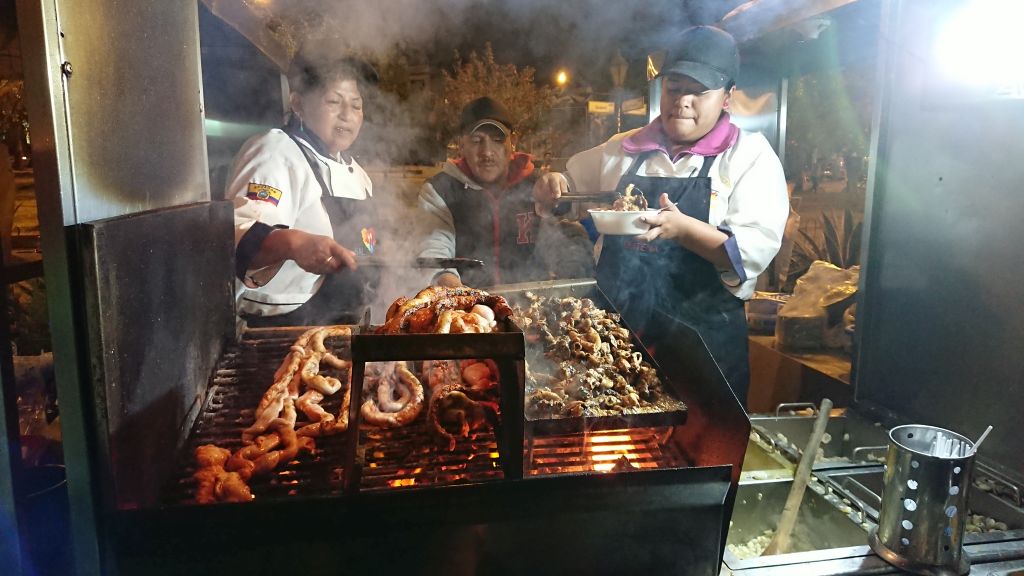 Tradional food, at the local foodmarket in Quito.

Night time at the local foodmarket in Quito

The other day they took us to Quito Colonial – the Old Historic District – where we spent most of the evening in the street La Ronda, where there is a lot going on. Here we saw traditional Ecuadorian dance, tasted ice cream with garlic and drank hot cocoa with a spice we have not yet fully identified. 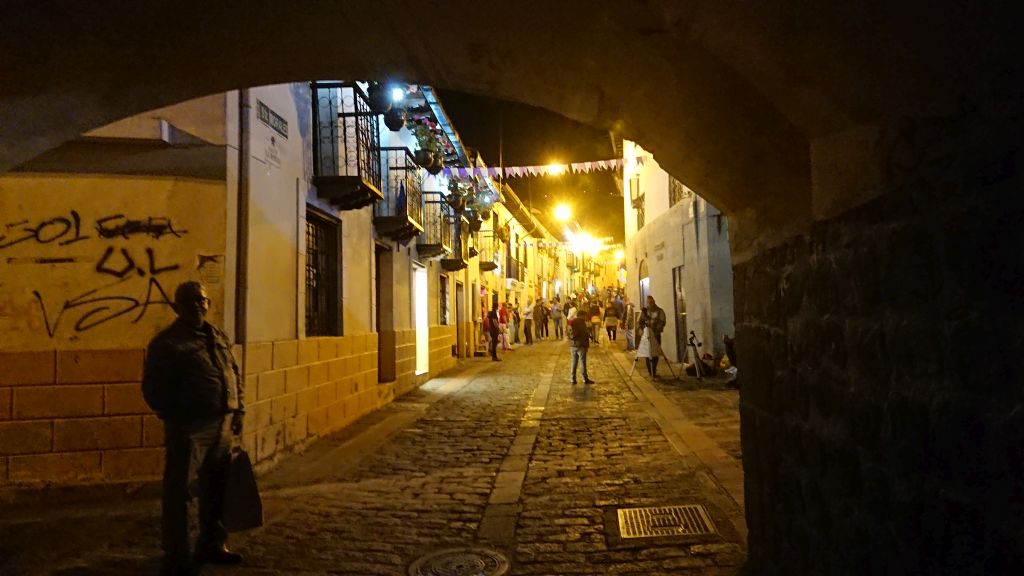 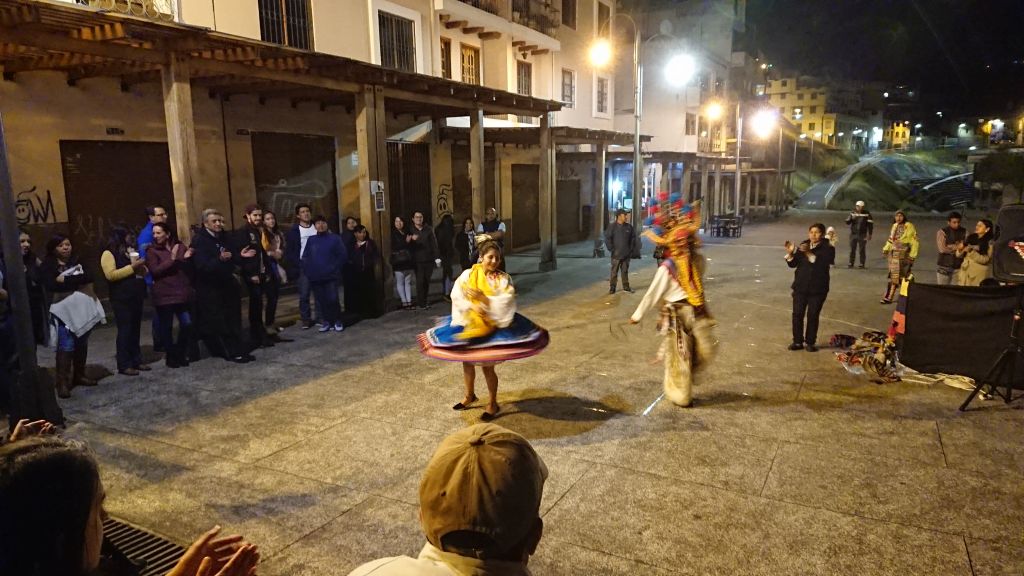 Our host family is very determined that we learn Spanish – which of course is also one of the main purposes of our trip – so everything is in Spanish! Particularly “Mami”, who has decided she will only speak Spanish with us!

We do not understand everything, but Gabriela is kind enough to also translate many of the things she tells us – if she didn’t, we would probably be completely lost.

Living in the present

You could write a lot of philosophical gibberish about living in the present, not getting stuck in the past and not worrying about the future. Right now, we are linguistically speaking living exclusively in the present tense – en presente – and it is actually a little difficult!

This may require some further explanation. As mentioned earlier, we go to a language school to learn Spanish. Bente had Spanish in high school many years ago, but for me it’s all new.

So far we have had two weeks of classes and we are progressing at a slow and steady pace, but there’s still a long way to go. We understand more and more, but far from everything. As long as people are speaking slowly, it is easier to understand.

According to Ligia – our profesora – they generally speak a more pronounced Spanish in Quito and Eucador, than in the other South American countries. So it is a good thing that we chose Ecuador, as all our lessons are conducted in Spanish. We learn words, practice numbers, verbs and their conjugations, and we have learned about reflexive verbs and much more. But so far only on the present tense! This means that when we try to make ourselves understood here in Quito, we are limited to the present tense – and it’s quite difficult to tell what you did the day before when you can only speak in present tense! But next week we will learn some past and future tense.

The lessons are not restricted to the classroom. We also go on excursions, where we talk and are told a lot about the country and the culture. And the lessons continue after school when we are with the family and when we go out on our own. It’s total immersion !!

“Almuerzo” in Baños together with Ligia og Vinicio.