A nice cup of coffee

There is nothing like a nice warm cup of morning coffee in the field, and the first cup of the day was really good.

We had already seen a Common Pauraque on the twisting gravel road that leads down to the little village Recinto 23 de Junio. In the village, we picked up the farmer, Luis. On his property, there is a Long-wattled Umbrellabird lek – and that was where we were going.

But first, we needed some coffee and some breakfast. We didn’t have too much time to spend on breakfast as the sun would soon rise. But as our guide Sandra (who we can highly recommend Mindo Bird of Paradise Tours) said, breakfast is important when going for a walk. Sandra quickly set out the breakfast in the boot of the car. We had everything we could ask for, coffee, tea, bread, ham, cheese, fruit, and hard-boiled eggs. It was a good start to the day.

The weather was perfect – clear skies and dry, which is not guaranteed in this neck of the woods. Filled with expectations we followed Luis down the muddy road. Would we finally succeed in finding a Long-wattled Umbrellabird? – we certainly hoped so. It didn’t happen in Buenaventura (read More birds and less soil under the nails). 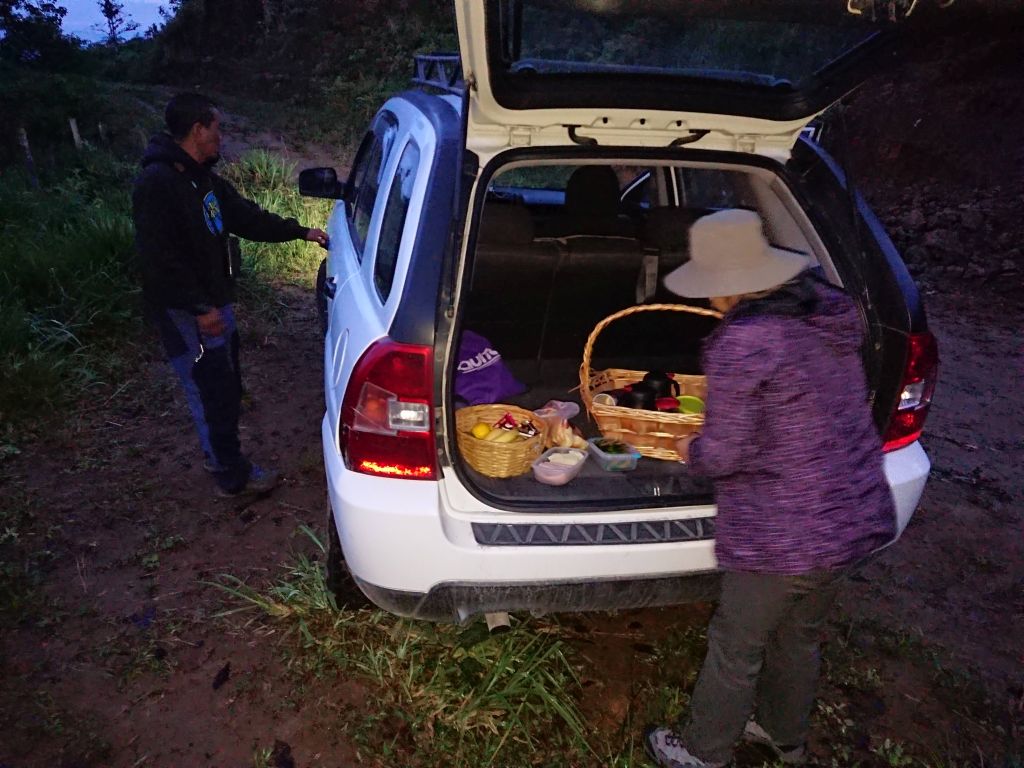 05:45 AM and Sandra is arranging the breakfast. Recinto 23 de Junio, Pichincha, Ecuador.

A Rufous Motmot called out – “Boop-oop” and a Roadside Hawk looked down at us from a tree. Sandra was quick to find it in the scope (editors note: telescope). We continued on, crossed a small stream, saw an Ornate Flycatcher and continued further up. The next bird sat out in the open at the top of a lonely tree – Long-wattled Umbrellabird!

It was a female, but there was no doubt that it was an umbrellabird. But so soon! We were nowhere near the lek, and we were in an area of open fields with grazing cattle. And before you get the wrong idea, it looks nothing like a typical Danish cattle enclosure. The cattle do look like the piebald Danish dairy cows but the landscape is quite different from Denmark. 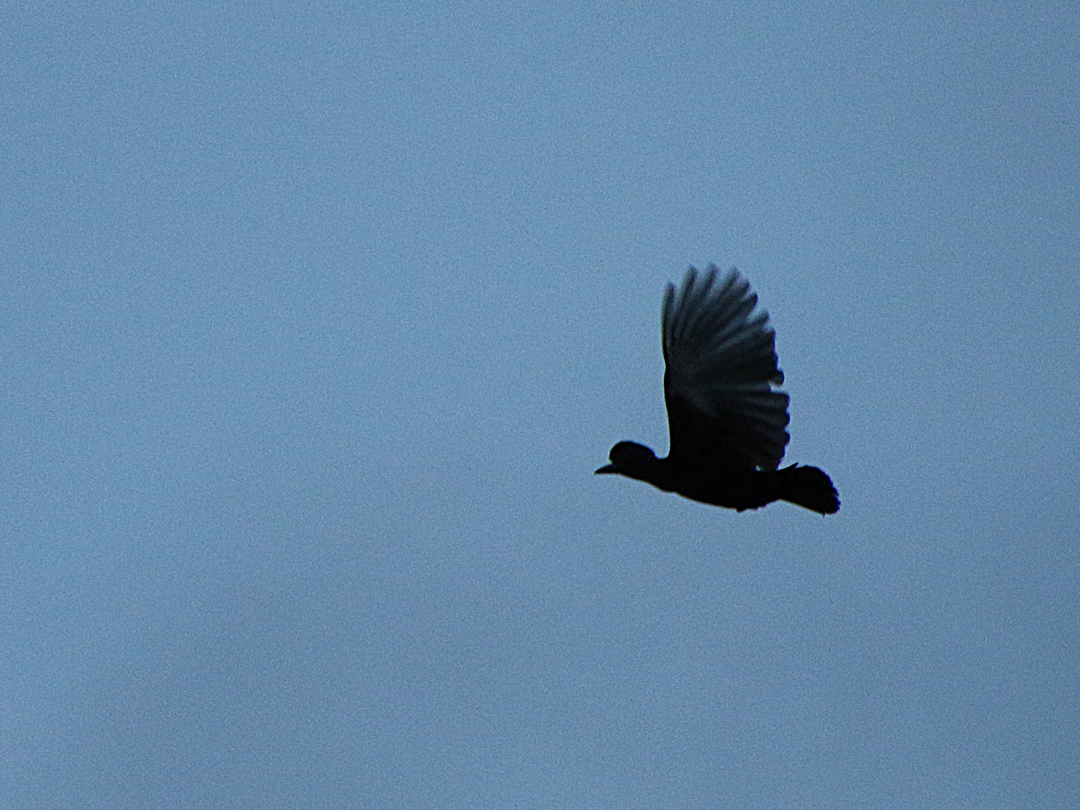 The next few minutes were awesome. There was an abundance of umbrellabirds around us. A couple of males appeared, and then another female. A male sang in a tree behind us – booom –  and we could hear another one further off. Another one appeared, and another, and another – and there were some that flew back and forth between the trees.

Especially the males are spectacular and funny looking when they are showing off in front of the females. With the long curled head crest, it really looks like they have an umbrella on their head. Actually, it also resembles an Elvis hairdo – and they certainly have the moves down.

And then there is the wattle which looks like a tie – it looks so weird. An indescribable spiral-like feathery thing that dangles like a spring from the throat.

It required a lot of concentration to keep track of how many umbrellabirds there were – but we saw at least seven different ones during that perfect morning. 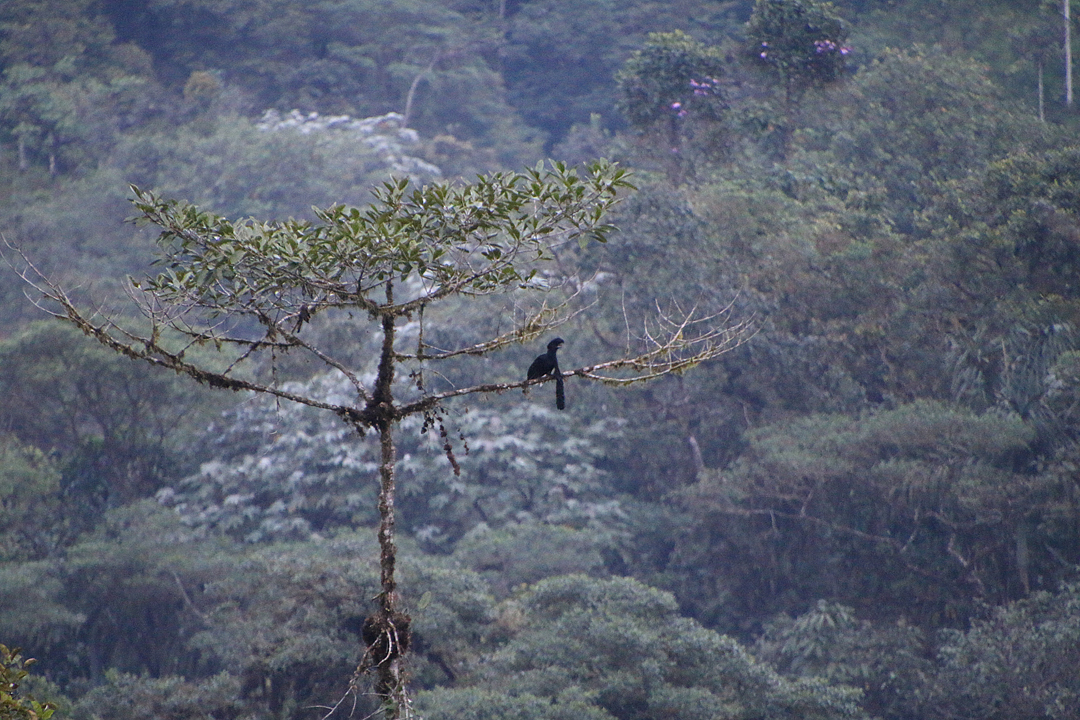 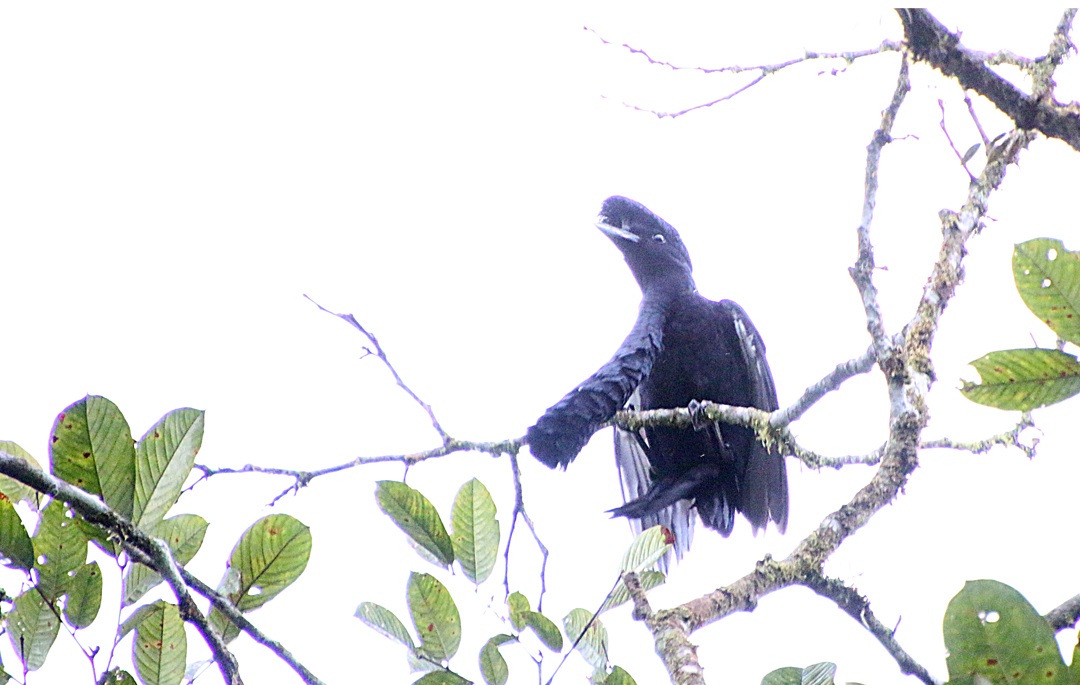 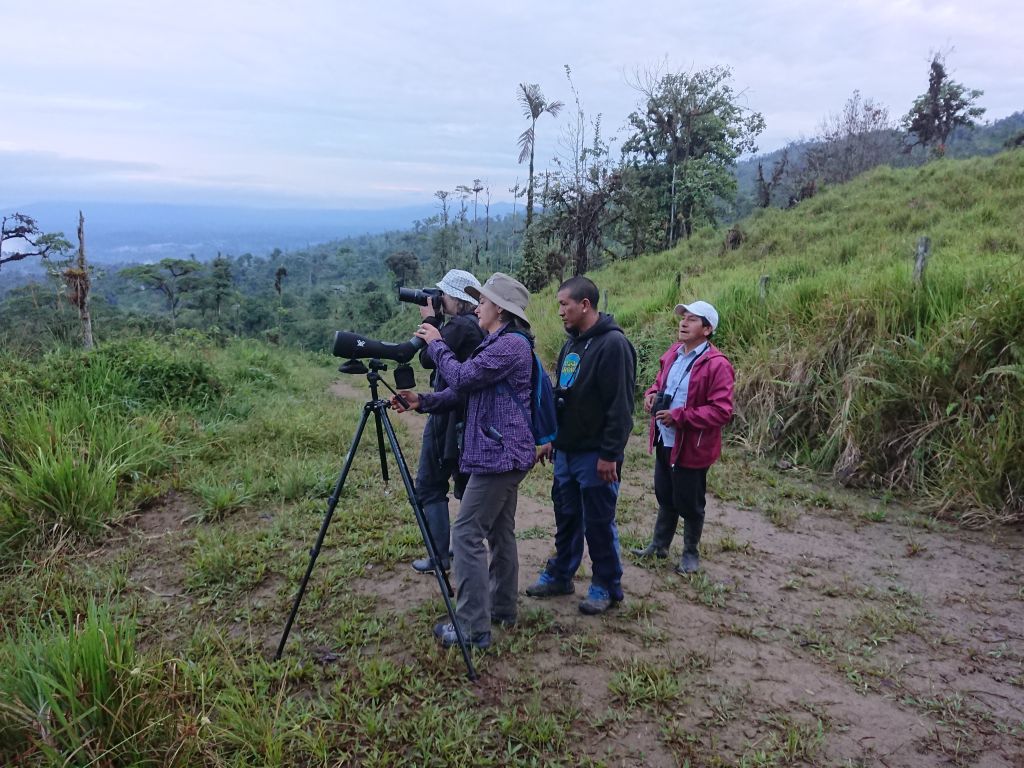 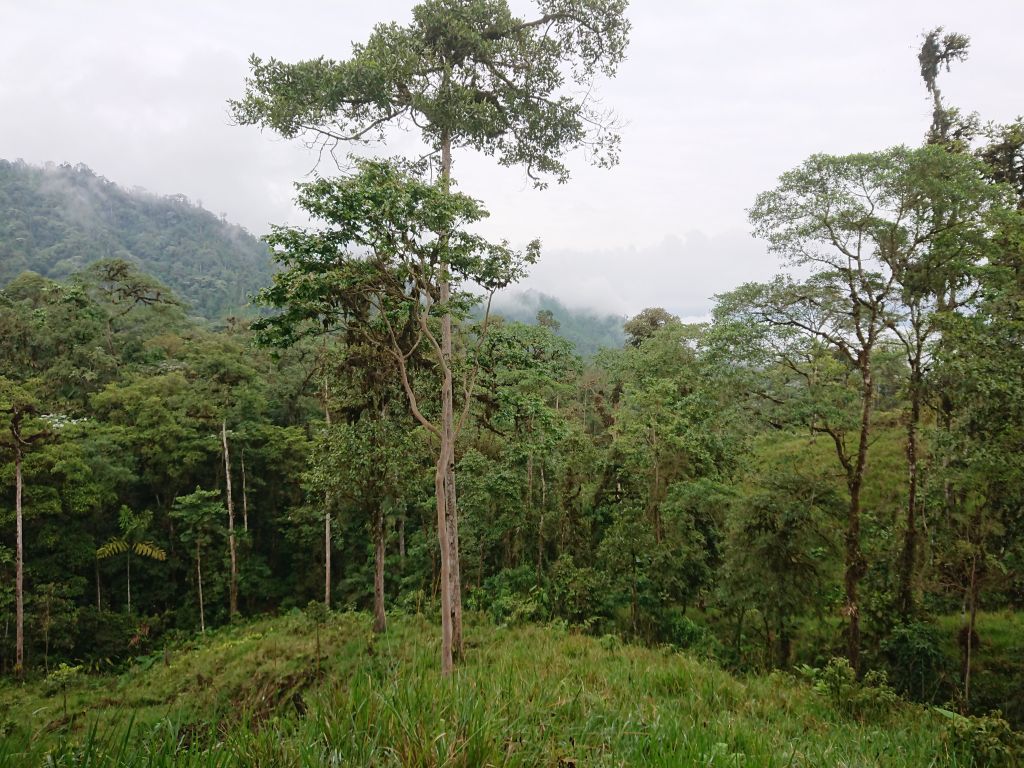 Next time you find yourself in Mindo and need a guide, we highly recommend Sandra Patiño and Mindo Birds of Paradise Tours http://mindobirdparadisetours.com.

We had a really great trip with her. She is professional, knows the birds and the sites and can put together a trip based on what you want. In addition to this, she is also very sweet and funny. Sandra speaks excellent English, which makes it all easier. However, on our trip, a lot of it was in Spanish but that was our own fault because we kept trying to speak some Spanish. 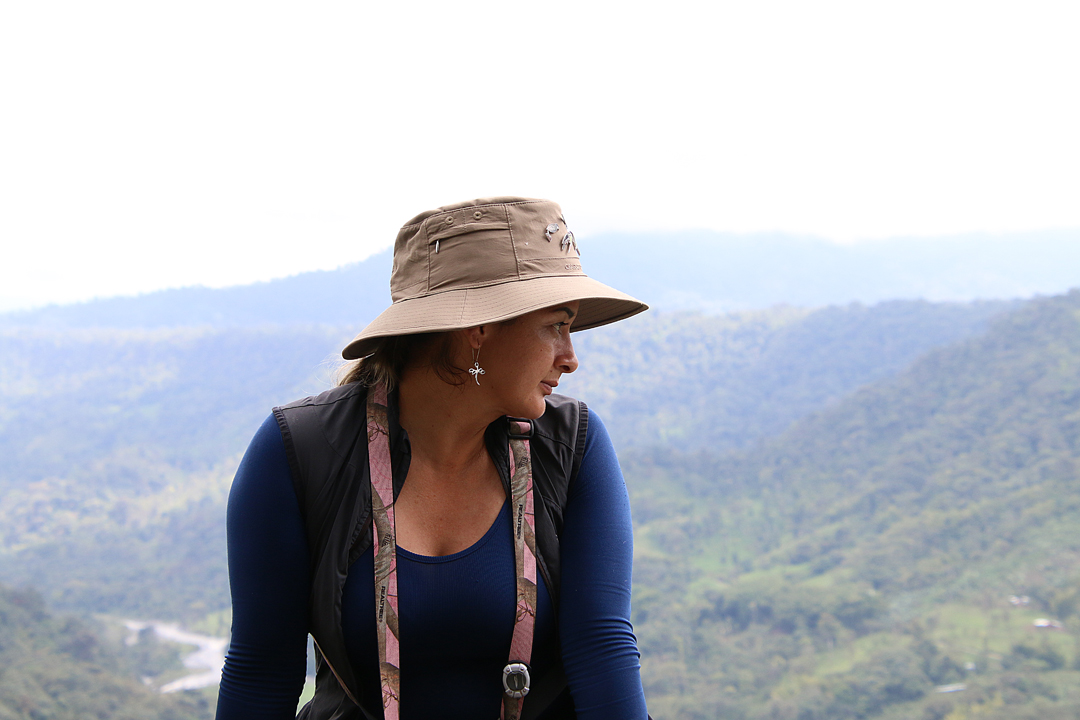