We have completed our two-week stay at Buenaventura. As I write this we are in the Copalinga lodge just outside the town of Zamora. Copalinga recently became part of Fundacíon Jocotoco’s now 12 reserves. But this entry is about our second week in Buenaventura.

As it was apparent from the previous entry (Soil under the nails) we spent quite a lot of time filling plant bags with soil. And it is really hard work – at least for two “desk jockeys” like us. We both agreed that it couldn’t go on for two weeks if all we had to do was filling bags – and it looked like that might very well be the case.

It’s not that we didn’t want to do any work, or because we are too good for that kind of work. But it is very frustrating putting soil in bags hour after hour when one of the main purposes of our trip is to see a lot of birds. Here we were in an area with approximately 350 bird species and we felt we were stranded in a plant nursery. Would we even get to see the Long-wattled Umbrellabird?

First of all, we had to work some of the time and it wasn’t easy to get around and we didn’t live down by the Umbrellabird Lodge. We lived further up, in a house. There were three km as the crow flies – or the umbrellabird for that matter – but the road was almost ten km because of the terrain. It took half an hour by car!

Couldn’t we simply get up early and look at birds before work? Yes, and we also did that. But the daily chores and the fact that there is only sunlight from about 6 AM to 6 PM meant that we only got to do a little birding in the vicinity of the house.

The workday ended at 4 PM after which we then had the opportunity to do a little more birding. But again, primarily around the house (we were too exhausted for a longer trek before dinner). 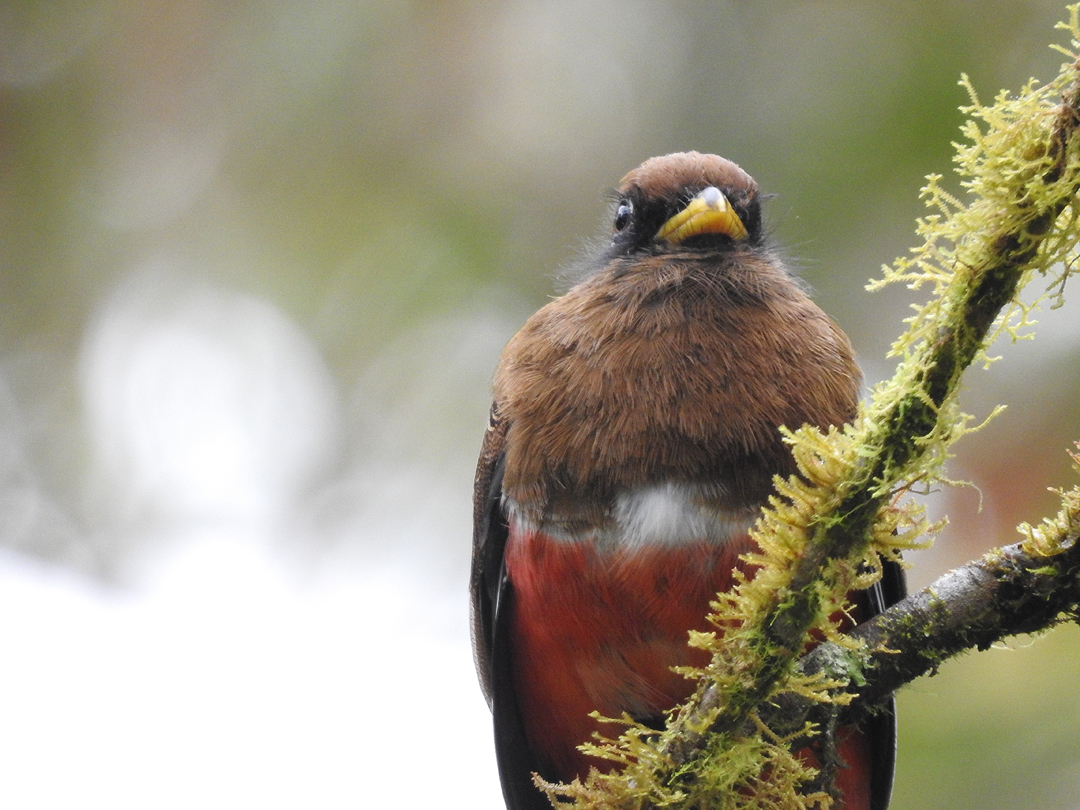 However, during the weekend we had the chance to go down to the lodge. But since we depended on others, and they depended on one car it took a lot of coordination. And since they did not understand that you have to start very early in the morning we didn’t get going until several hours later than what we would have liked. So even though we got to see a lot of hummingbirds at the feeders at the lodge – and we got some internet access – it was still frustrating.

Something had to be done

As mentioned above, we felt it couldn’t go on like this, something had to be done to change things. There was no way we could walk such a long way in the morning as we would have to get up very early and still wouldn’t be able to make it back to work on time.

Our solution was that we during the following weekend were to be upgraded to tourists and move down to the lodge from Friday evening to Monday morning. At least that was what we tried to arrange with the help of Pamela, who speaks English and is our contact in Jocotoco in Quito. It was possible to get an upgrade – for a fee, of course – but to the slightly lower volunteer price.

Many more birds and less soil under the nails

But it all had to be arranged and coordinated with René and Jeanneth in Buenaventura. It is in situations like this that you really feel the challenges and misunderstandings that arise due to language barriers.

We will skip the details but on Monday things had changed. We had a meeting with Jeanneth, where we talked about the plans for the week and where we also tried to explain that we were happy to do some work and it wasn’t because we didn’t like to live up in the house with the others, but simply because we would like to spend the week down by the birds.

In the end, it was agreed that we would only work one morning and one afternoon in the plant nursery and the other days we were out looking at birds. We didn’t get to live at the lodge but that was okay.

One of the days we were looking at birds together with Baldomiro, who is 65 and used to own some of the lands that now belongs to Jocotoco’s sanctuary.

One of the other days we were with Diego in Jocotoco’s hummingbird garden Jardin de Colibries, where he made sure that there were sugar water and bananas for the birds. In addition, he also greeted any visitors at the garden. It was a nice little place where we saw 11 species of hummingbirds. We also took a walk further up into the heights through the fog and saw an old finca that Jocotoco had inherited after its previous owner. 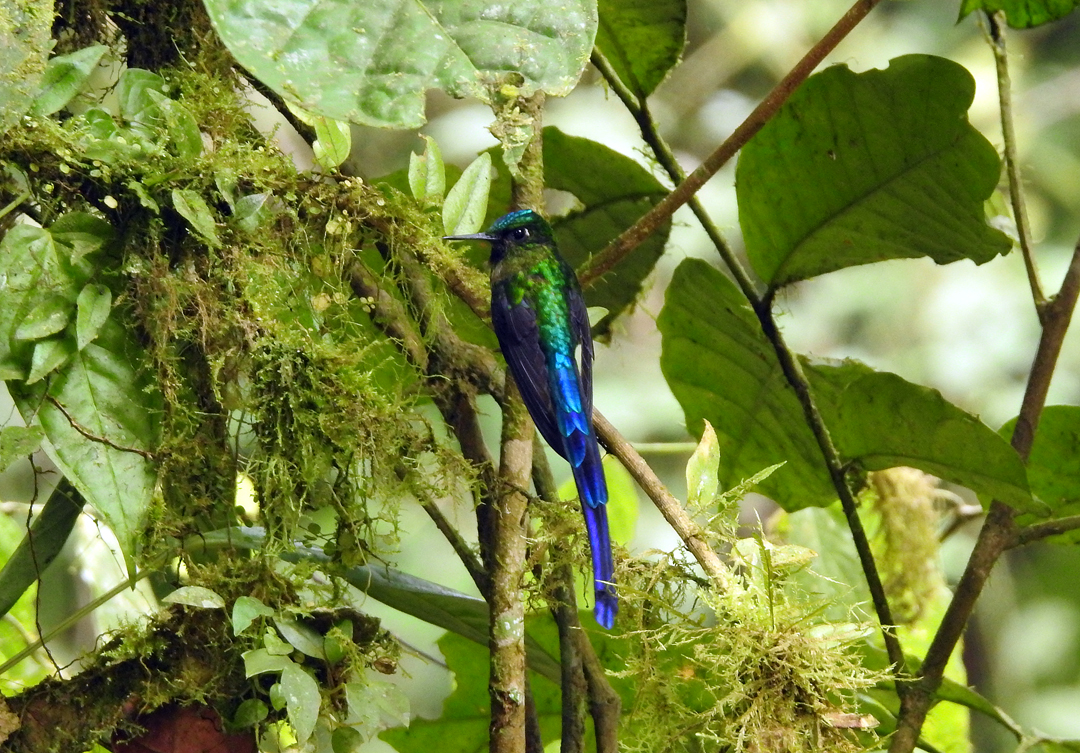 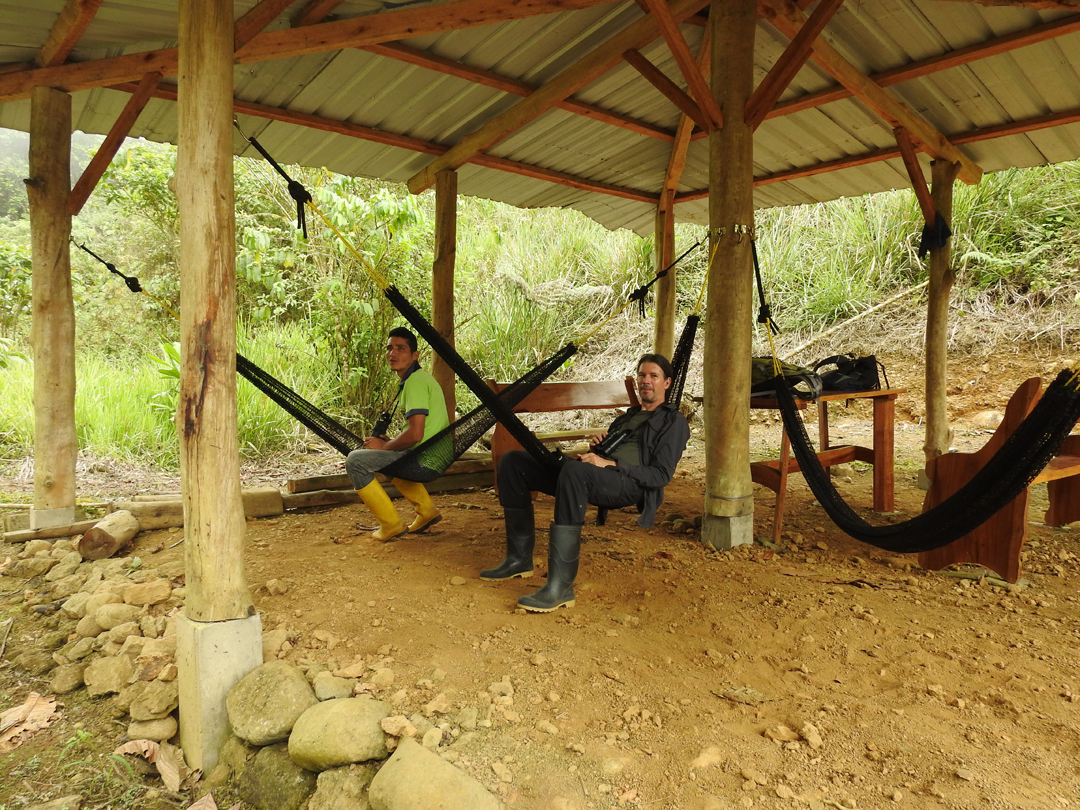 Friday we were back on parrot registration duty. This time together with Diego and Baldomiro, but on a different route. 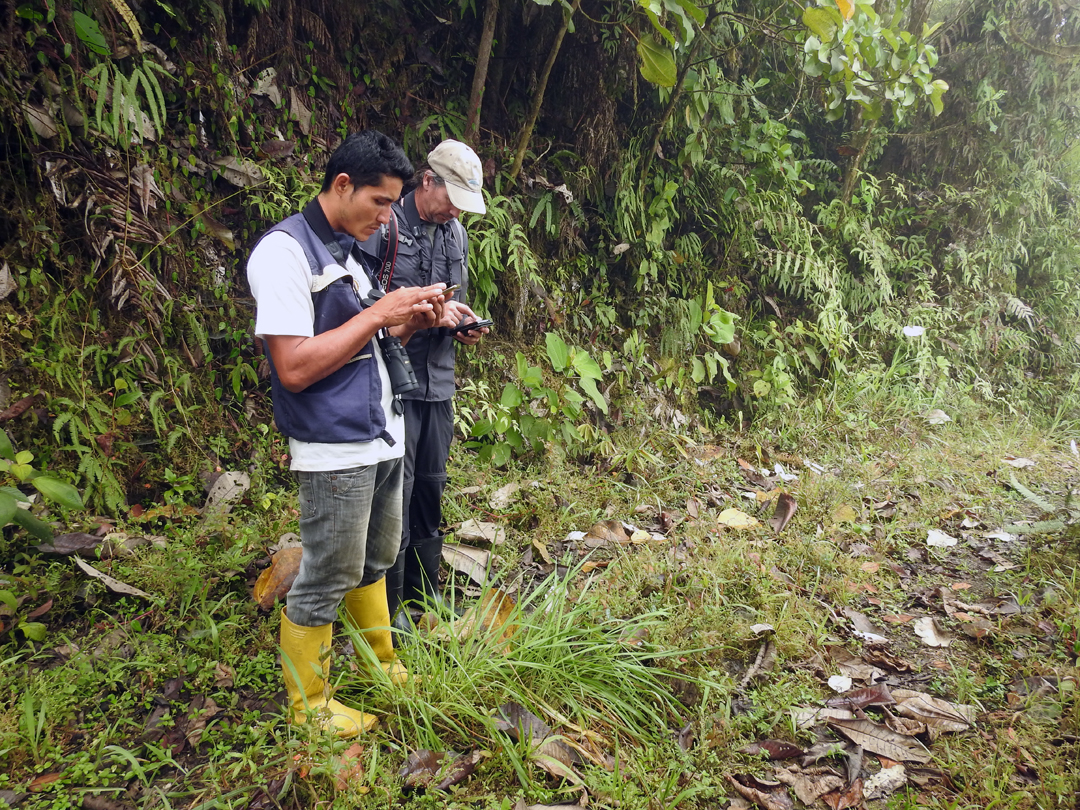 Diego and Uffe is checking a bird species. Buenaventura, Ecuador. 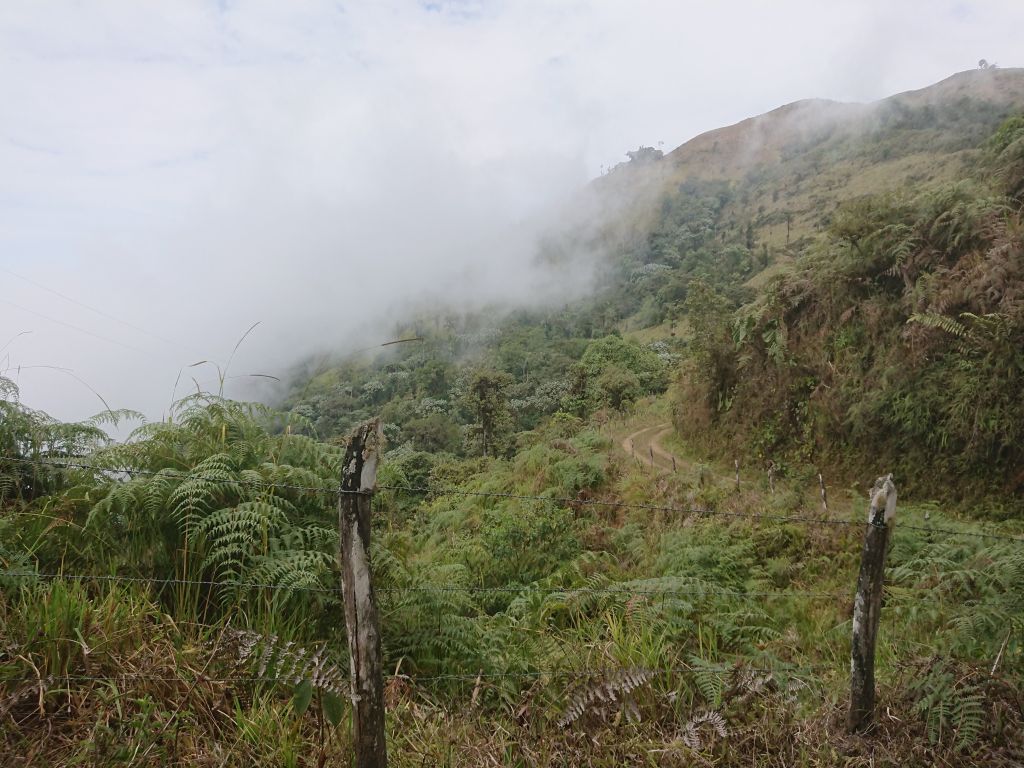 The landscape above Buenaventura, where we were monitoring the El Oro Parakeet. 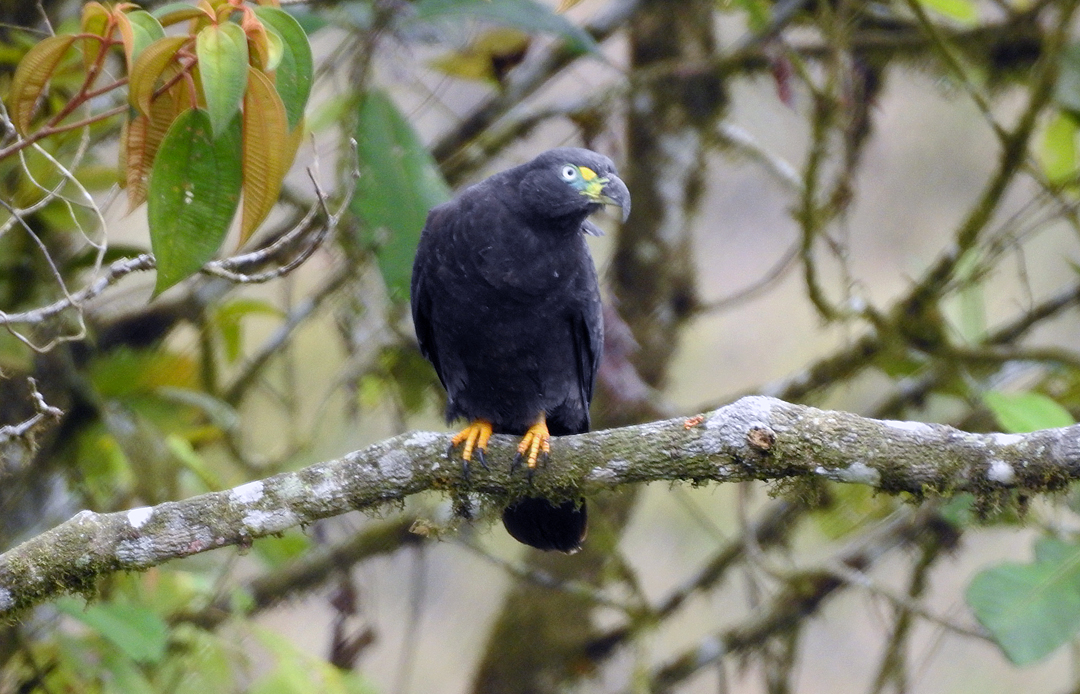 Not the only volunteers

Wednesday afternoon David arrived, he was also there as a volunteer – at least part of the time. Apparently, we got the job of helping him get settled. We didn’t have any problems with that as David was a pleasant older gentleman from California.

It was really nice to be able to speak a little English again. The brain runs on full steam all the time when you have to try to understand and speak in a new language. But we must have learned some Spanish because when we spoke with David we mixed some Spanish words in with the English. And when he said a few words in Spanish, the others looked questioningly at us, and we then tried to explain what he meant. 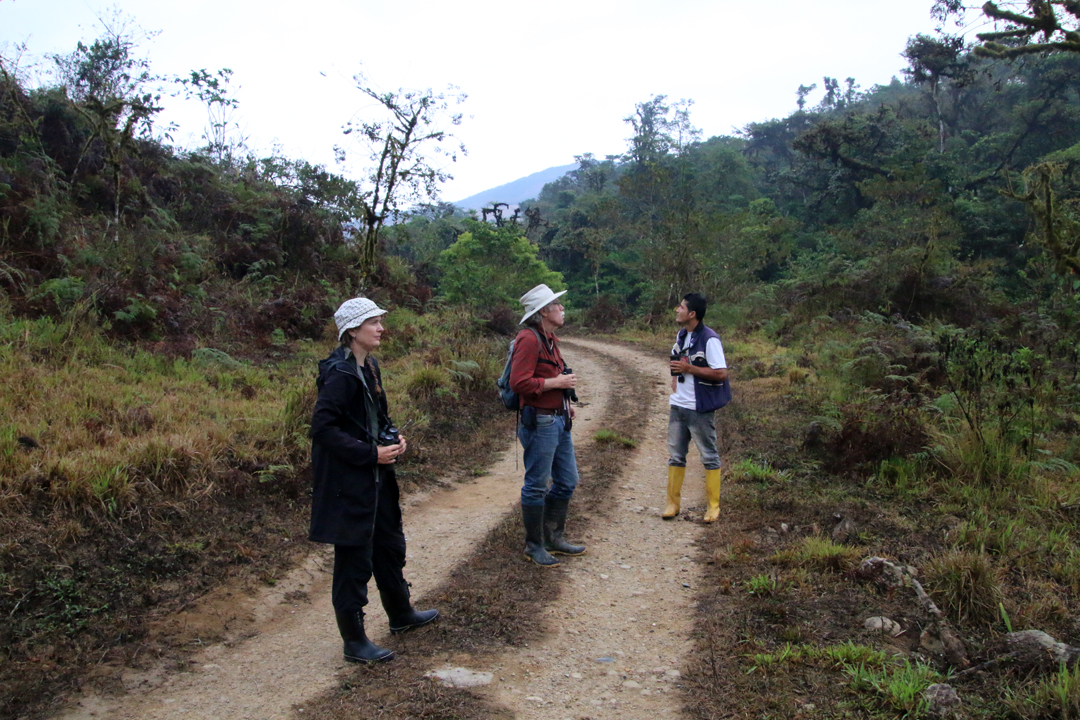 Luckily, David had a rental car, and we went on a trip during the Saturday – our last full day in Buenaventura. We got up early and drove down to the lodge. Unfortunately, it was very foggy. We couldn’t see much but did manage to find a flock of White-bearded Manakin down in the forest. 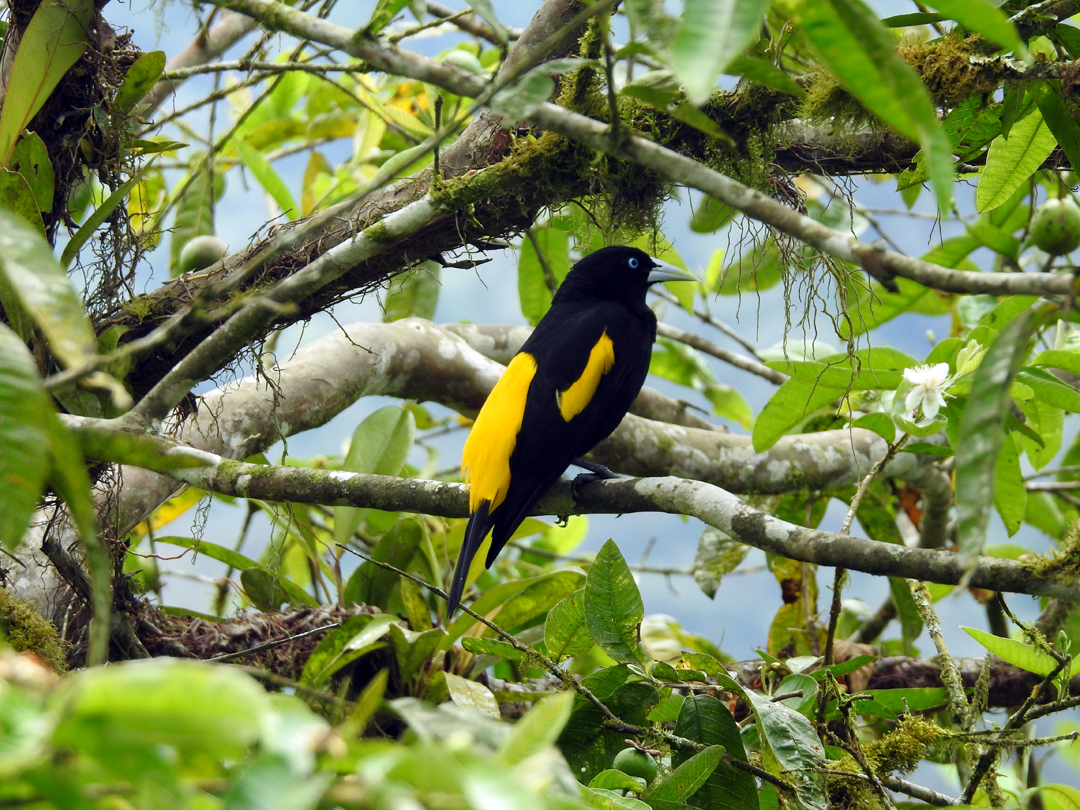 The weather cleared up during the morning and we saw some more birds, nothing too spectacular but got a few new species for the list. We then hung out at the feeders and looked at the hummingbirds before taking the Umbrellabird Trail. The trail leads down to the lek used by the male Long-wattled Umbrellabird during mating season when fighting for the females. But as it was late in the day, and not the right season, we didn’t expect to see any – but you never know with birds…

A few hours later the three of us sat in La Canada in  Piñas and ate a late, but excellent almuerzo. And no, we had not seen an Umbrellabird. 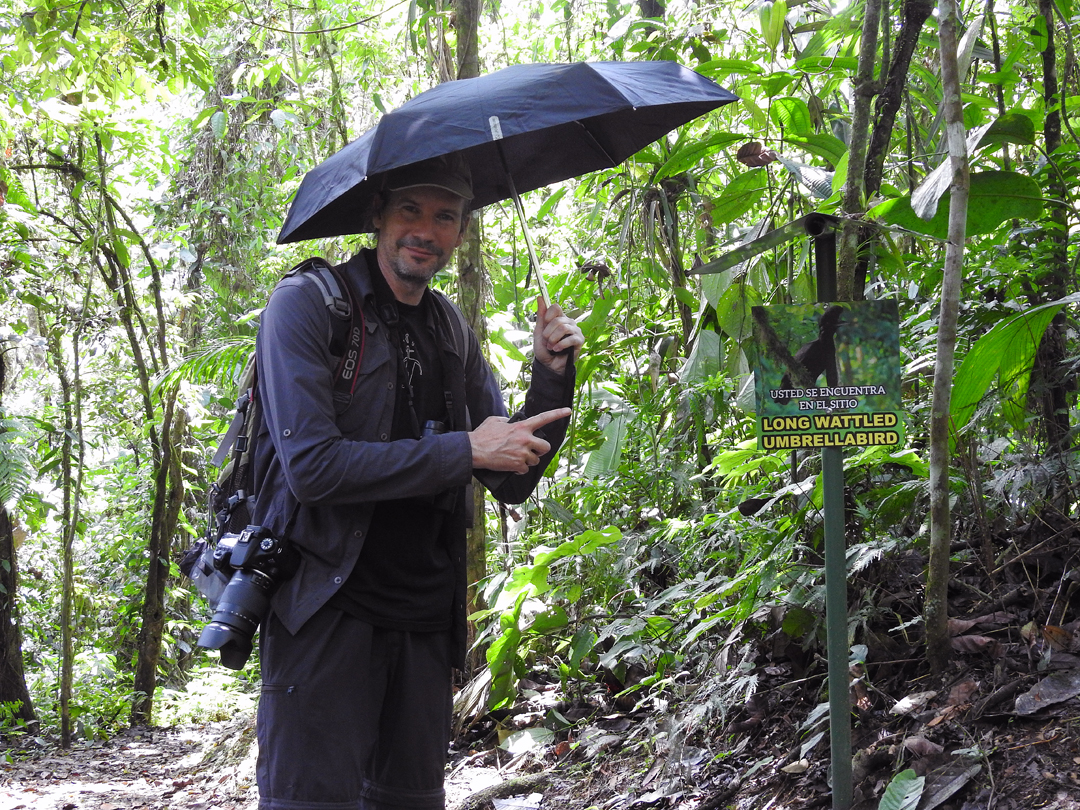