We are back in higher altitudes as we are in Fundacíon Jocotoco’s reserve Buenaventura. The sanctuary is in southern Ecuador on the west side of the Andes, not for from the town of Piñas.

The difference in altitude and forest type helps make this a very interesting birding spot. This is also seen in the name of the lodge in the sanctuary – Umbrellabird Lodge. In the forest, you might get lucky and see the funny looking Umbrellabird, which has a long ”beard” and an “umbrella” on the head! Unfortunately, we have not seen it yet, but we hope to do so soon. But there is a good chance of seeing some birds in the area, as there are more than 330 recorded species in the sanctuary.

We have been working for a week as volunteers in Buenaventura, where we have primarily been helping with Jocotoco’s reforestation efforts.

There are more people working in Buenaventura than there were in Ayampe. The coordinator here is René. And then there is Jeanneth, who works with the volunteers. We have primarily been working together with Cornelio, Jorge and Holger (I may have misspelled their names!), who has worked here for the last ten years. In addition, there is also Byron, and an older gentleman, whos name escapes me at the moment, but he previously owned some of the lands which is now part of the sanctuary. And finally, there are a few others, who we have not met yet, down at the lodge. 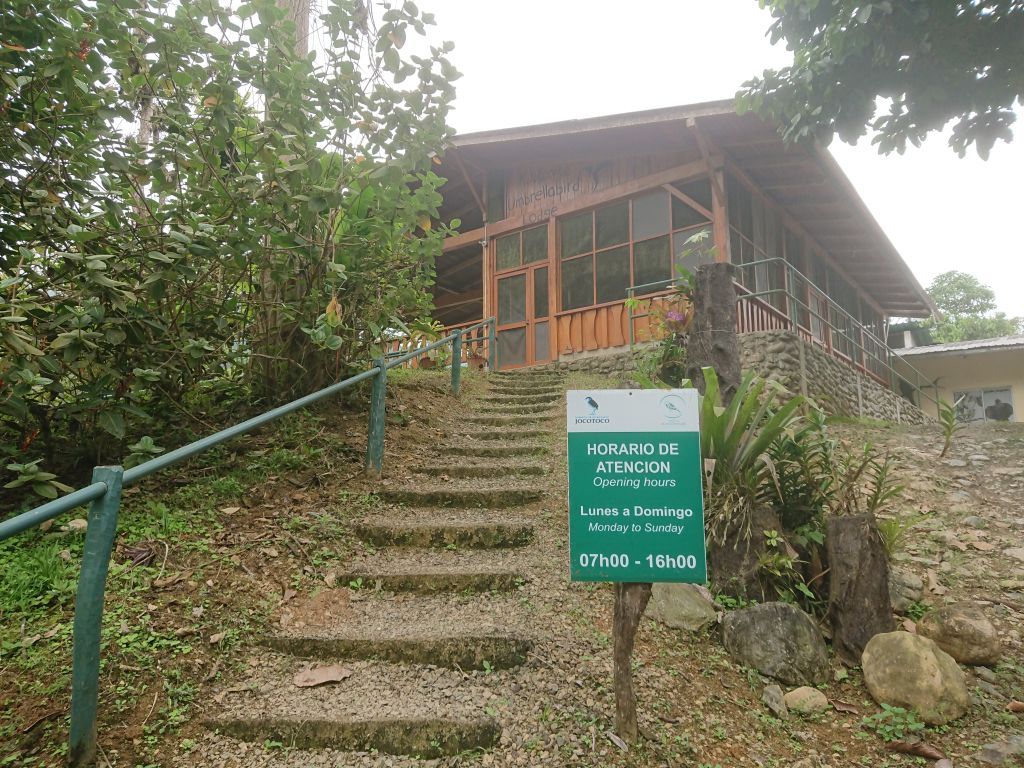 The heading of the Danish version of this blog entry (Jord under neglene) is not a reference to the blog of Uffe’s former colleague (though it is well worth a read – if you can read Danish. But you can find it here: Jord unger neglene). The heading should be taken literally – we have had soil under the finger nails.

Our first assignment was to plant a large number of cuttings from two (or possibly three) species of trees in plant bags. This was also our first opportunity to speak with the three employees and Jeanneth.

After about half an hour there were no more comfortable positions left to sit in and there was no room for long legs between the rows of plants. The three others had already been at it for a while before we started. After the cuttings, we moved on to the next task, which consisted of filling dirt in the plant bags. It is quite taxing for the body when you are not used to that kind of work, so after a few hours we were well and truly beat – and lunch was still far off! 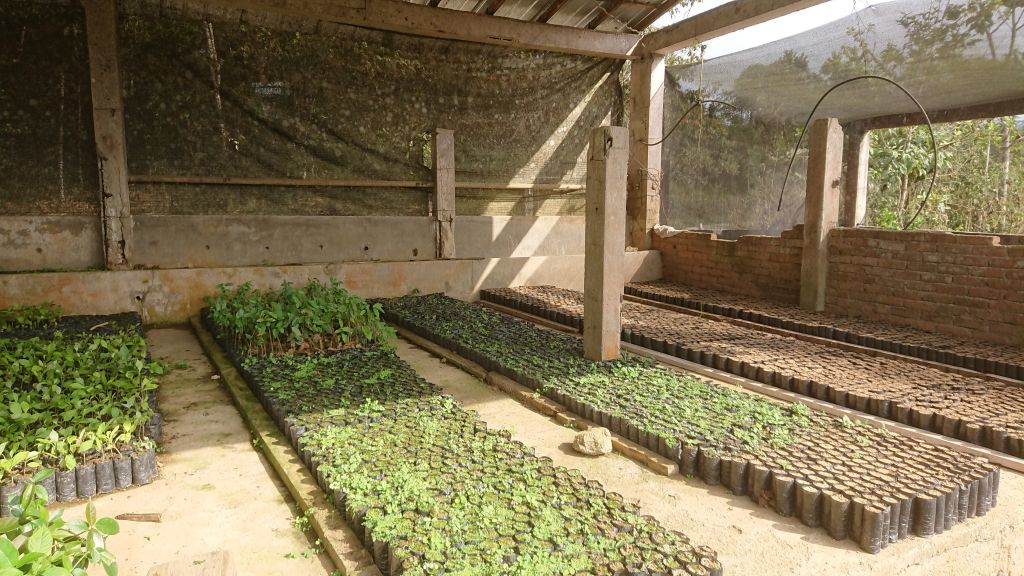 After lunch, we got a ride down to Umbrellabird Lodge. The assignment for the afternoon was not looking at hummingbirds or Umbrellabirds, instead, we were going to go out and collect cuttings together with the three employees. It was primarily cuttings from the tree Palo Blanco. We should mention that cuttings in this context are shoots of self-sown seeds that grow along the watercourse.

We walked along the Royal Flycatcher Trail down through the forest in order to get to the watercourse. There were a few birds on the way, f.ex. a Zeledon’s Antbird.

In order to be able to help, we first had to learn about the plant and how to recognize it, to make sure that we did not pick the wrong ones. This meant that we weren’t that effective compared to the three experienced workers. The fact that we also had to move through a watercourse did not make it any easier, and when we got to a place where we had to climb a couple of meters up over some large boulders, we decided that we would not attempt that. We were exhausted and did not want to risk slipping and falling with binoculars and cameras. So we got a much-needed rest while the others continued another half an hour or so.

On the way back we spotted to trogons, that turned out to be Ecuadorian Trogon and another check mark on the list of birds. 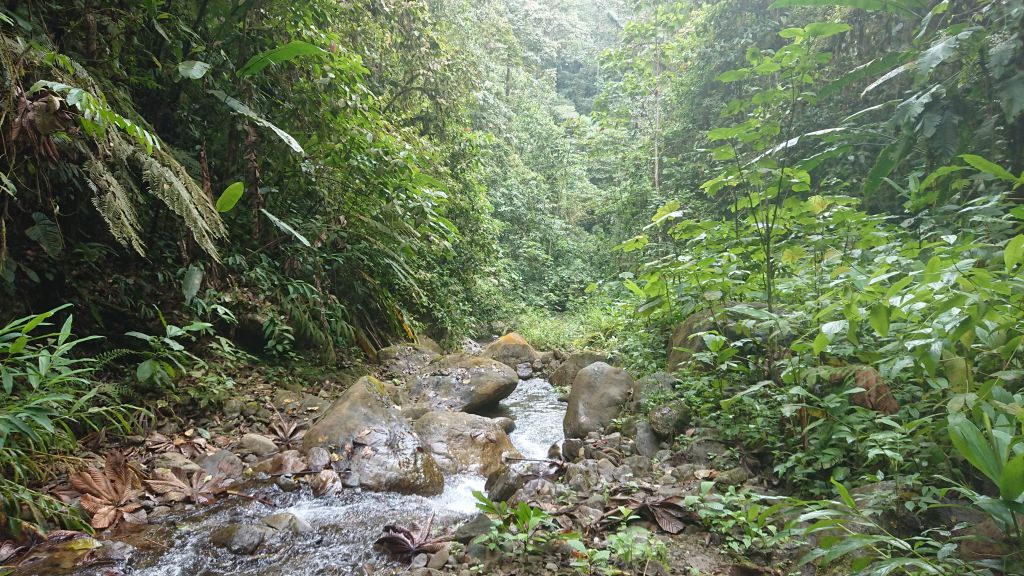 A watercourse in the Buenaventura Reserve.

There is not much to tell about the next couple of days. They primarily consisted of filling soil in plant bags. Part of the time we were on our own, as the others were out planting the thousands of cuttings they had collected. We filled soil in bags for four hours before lunch – which we made one of the days by the way. And then we filled dirt in bags for a few more hours after lunch.

When all five of us were on ”soil duty” we tried to talk a little with the others about various things. They are all very nice and curious about what life is like in Denmark. So we attempted to explain, once we understood what they were asking about.

It was a couple of long and exhausting days even though we also took some breaks because of the heat. We used the breaks to look for birds. There weren’t that many, but a couple of long tailed hummingbirds – Violet-tailed Sylph – would forage regularly in a flowering tree. 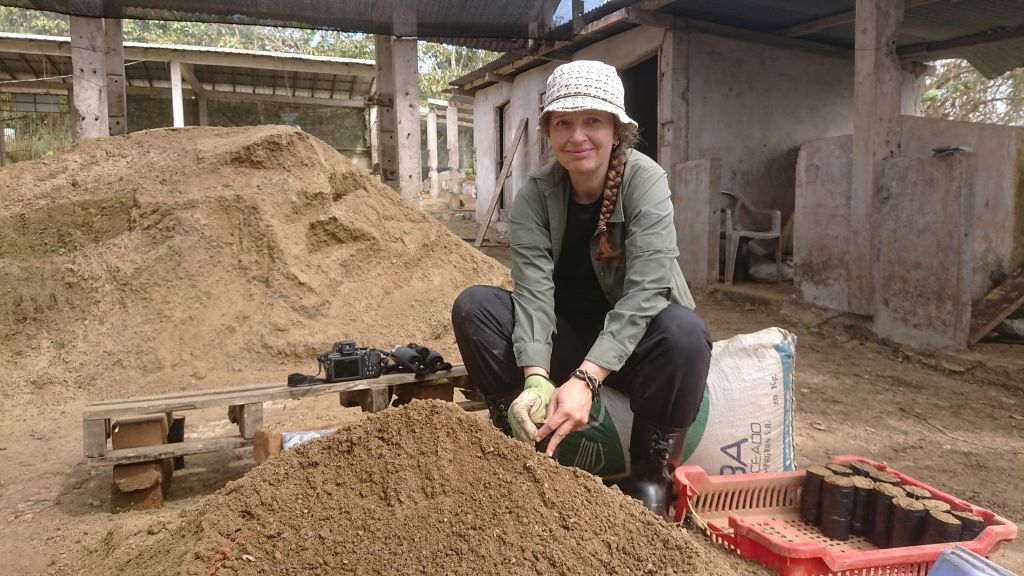 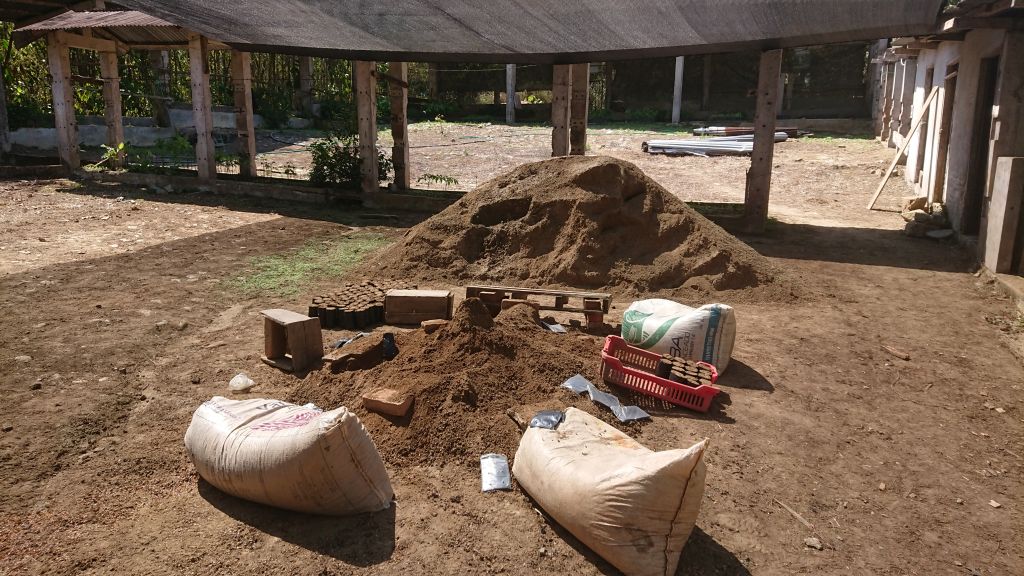 The pile of soil is getting smaller.

Birding with Leo and Diego

The Friday assignment was of the type we find fun and exciting. We were to spend all day helping register parrots and other birds.

We were picked up at 5:30 AM by the brothers Leo and Diego. Every Friday they register the birds around Buenaventura. It is primarily El Oro Parakeet and Red-masked Parakeet, which are the main focus.

In a four-wheel-drive, we went by narrow, twisting and bumpy dirt roads. It gets light very quickly here around the equator and before long we had a magnificent view of the valleys that were shrouded in clouds. On the way, we looked for parrots and before long the two brothers spotted the first ones. It turned out to be the quite rare and endemic El Oro Parakeet (we are in the El Oro region). There were five in all.

The trip continued up to the first counting spot, where Diego was dropped off. We continued to the second counting spot. There were eight counting spots in total to be covered that day, two hours each place. So there was plenty of time for birding, and at our first spot, we saw, among others, White-tailed Tyrannulet Beryl-spangled Tanager, Blue-winged Mountain Tanager, Red-billed Parrot and three Red-masked Parakeet. 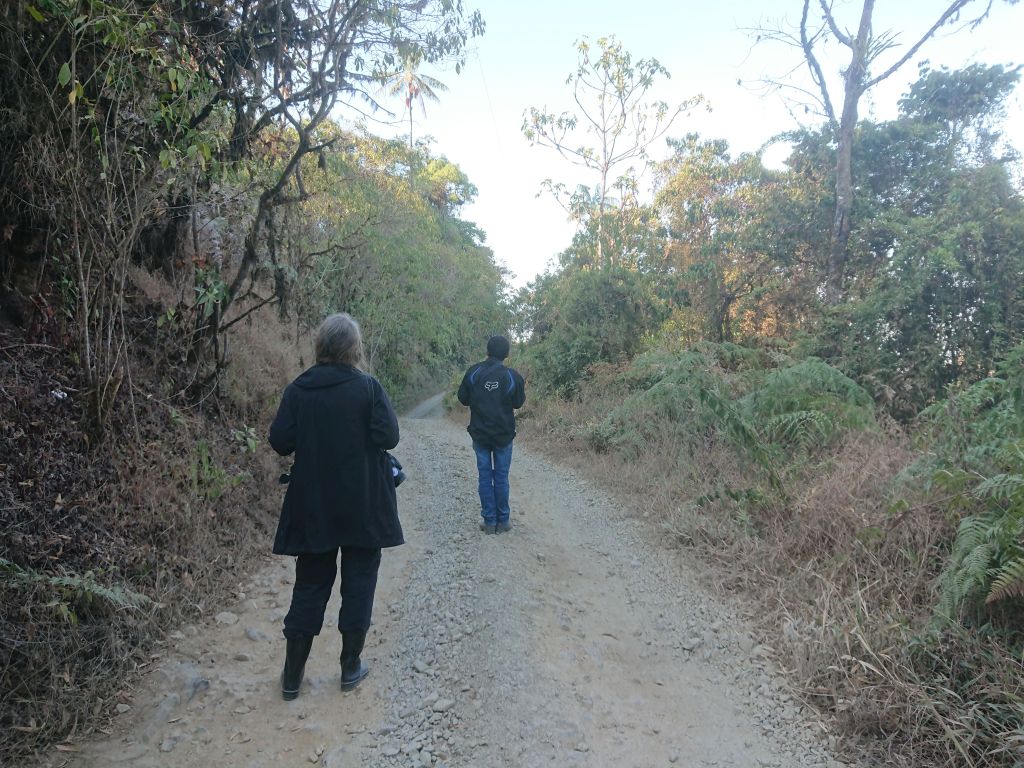 Leo and Bente counting/catalogueing at the first spot of the day. 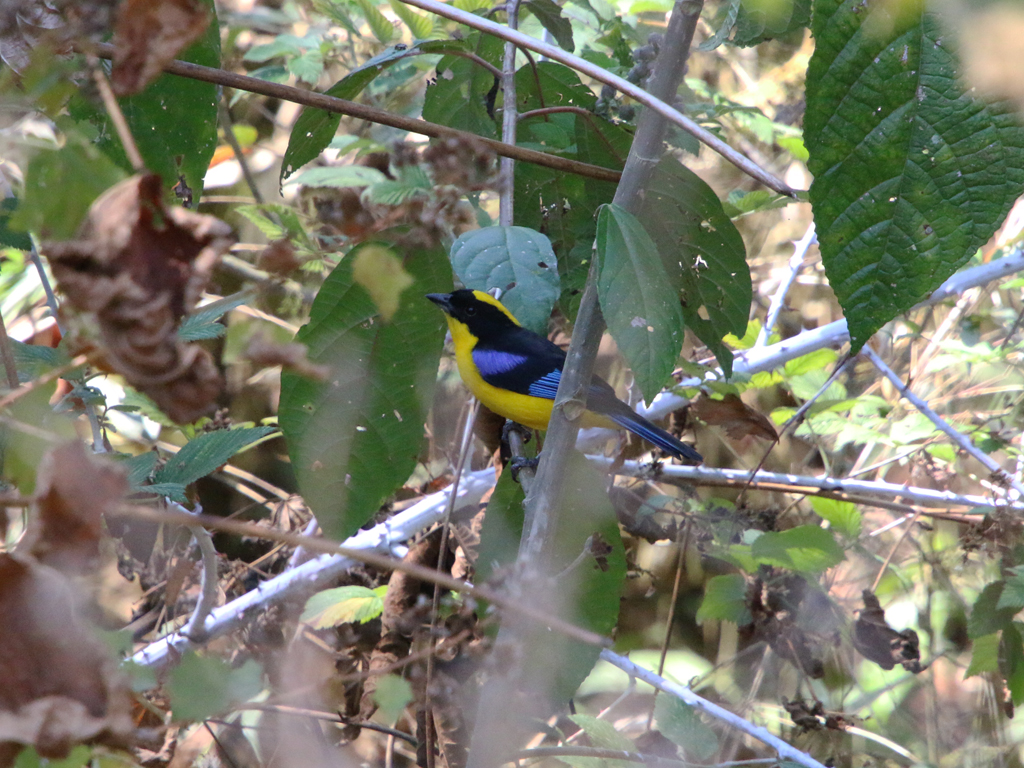 After a few hours, Diego joined us and we drove him to his next spot and then we countinued to our next spot.

We were at an altitude of 1500 – 1700 m all day, above the clouds, so we could really feel the heat of the sun. There weren’t that many birds but we did get several new species. The most exciting was probably a beautiful Solitary Eagle, which according to Leo hadn’t been seen in the area for several months. Another species we really liked, was a breeding pair of Golden-headed Quetzal. It is a trogon and a very beautiful one at that. However, the male does not have the same long green tail as the Resplendent Quetzal, which we saw in Costa Rica (read – in Danish – Dry Forest, Bellbird og en Quetzal og Quetzalernes dal og ‘Dødens bjerg’), but it is still very beautiful. 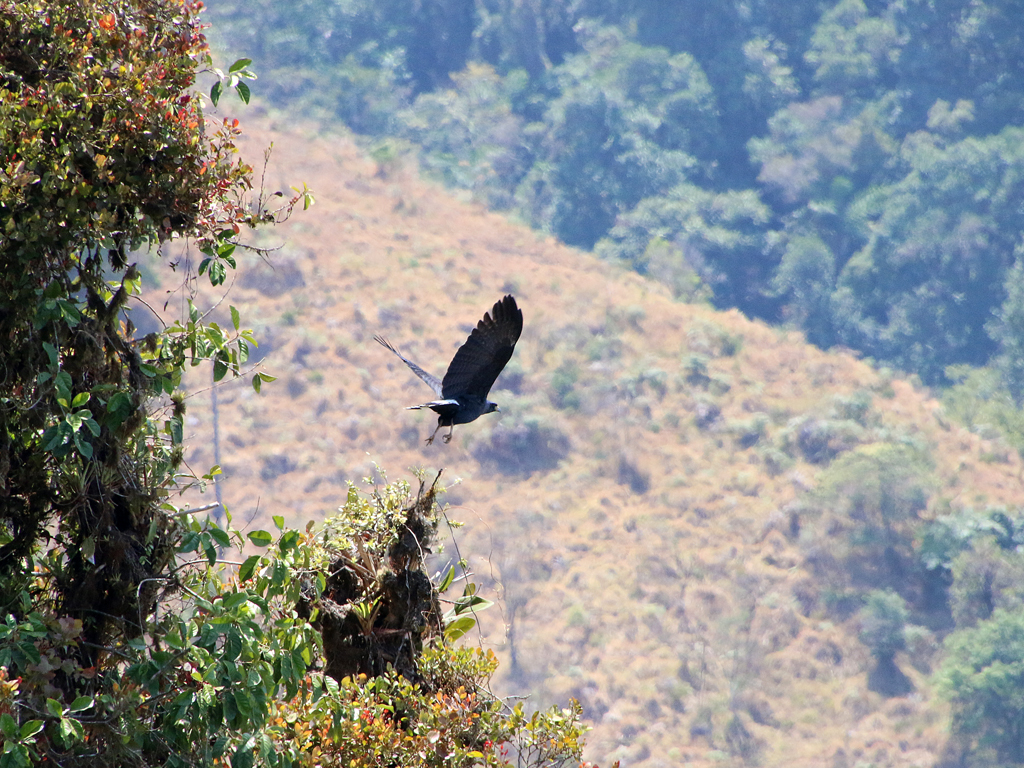 Solitary Eagle, a rare sight in the area. 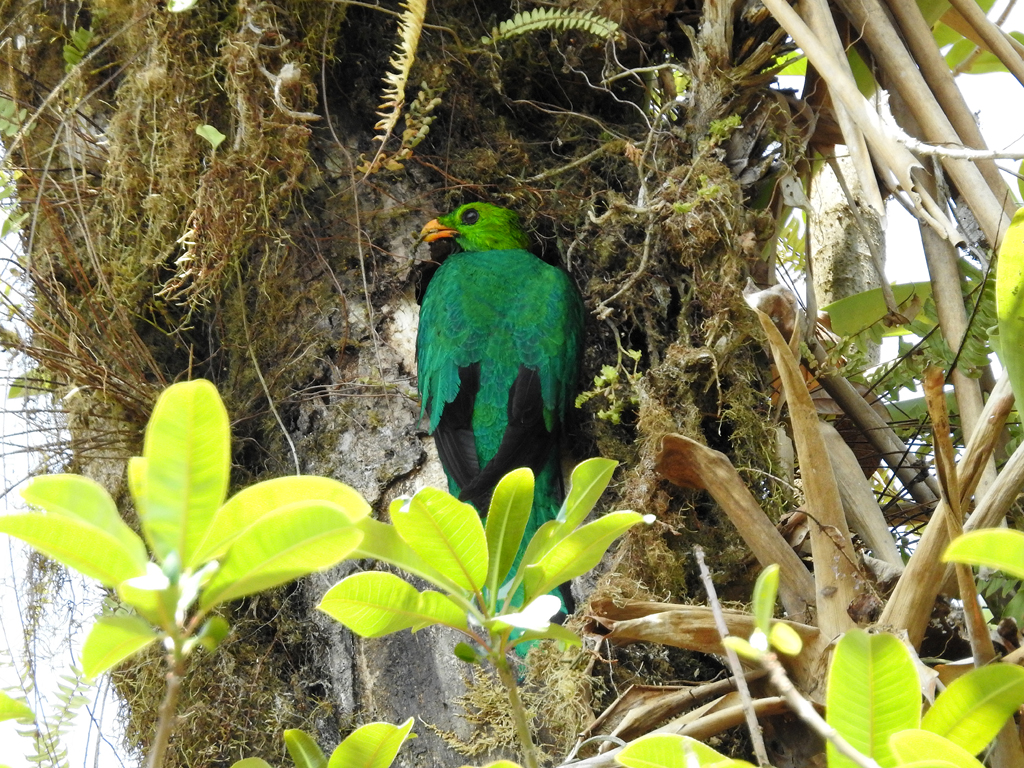 In addition to that, we saw Crimson-rumped Toucanet, Masked Trogon, Smoky-brown Woodpecker, Smoke-colored and Brown-capped Flycatcher, Silver-throated Tanager and many Golden Tanager. There were Rufous-winged Tyrannulet, Line-cheeked Spinetail and we got some hummingbirds too like Chestnut-breasted Coronet and Booted Racket-tail on our list.

It was a great trip and Leo knew the birds and their songs and calls, and he was very good at explaining when there was something to see or hear. We are ready to come along next Friday when they are covering a different route. 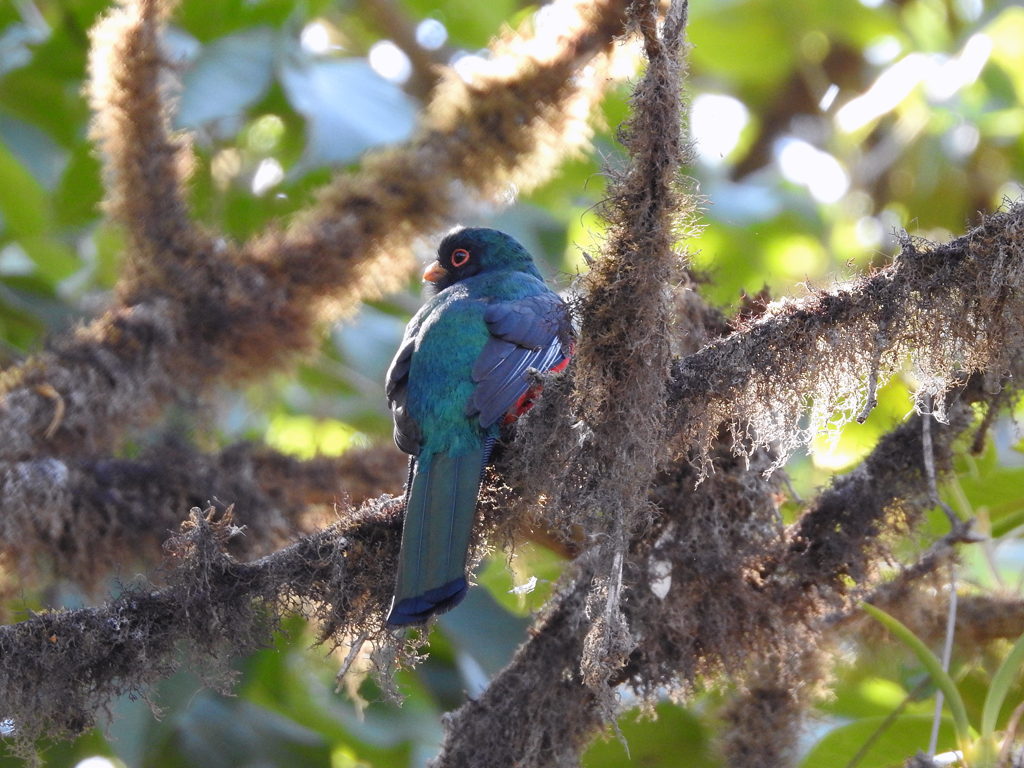 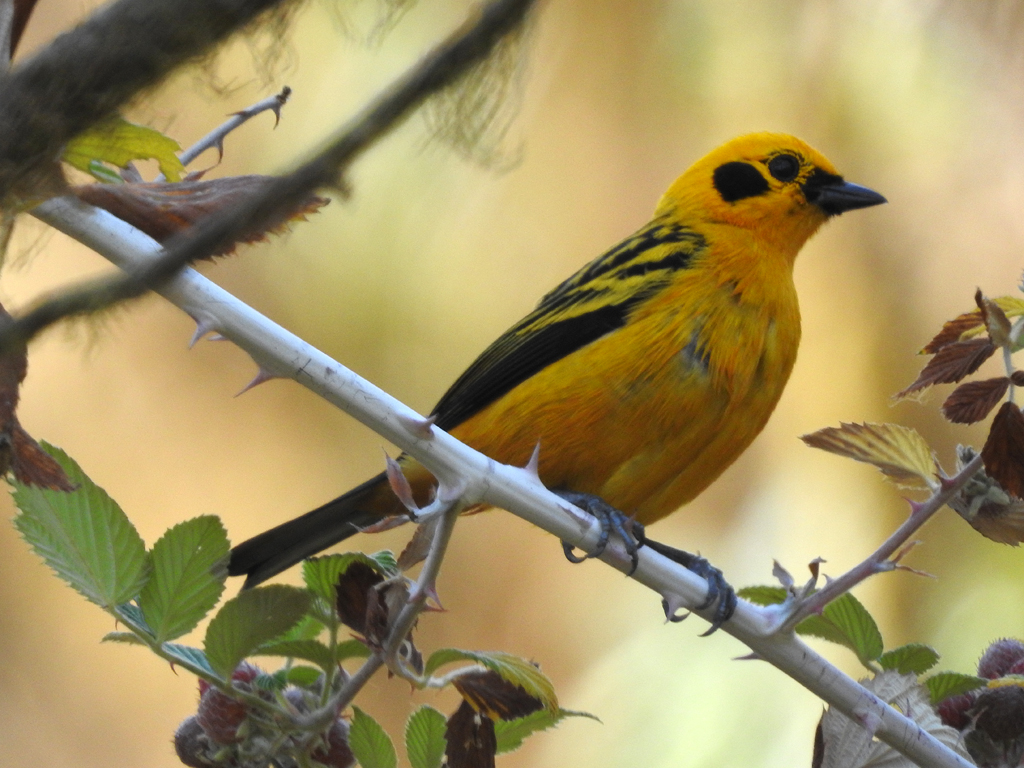 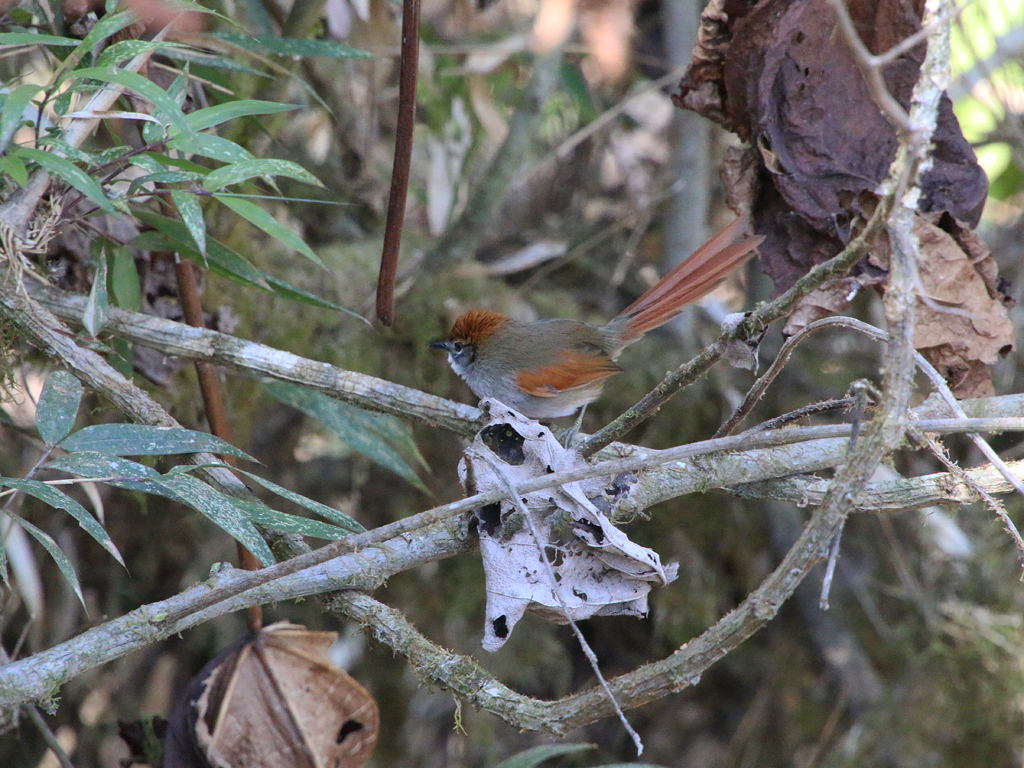 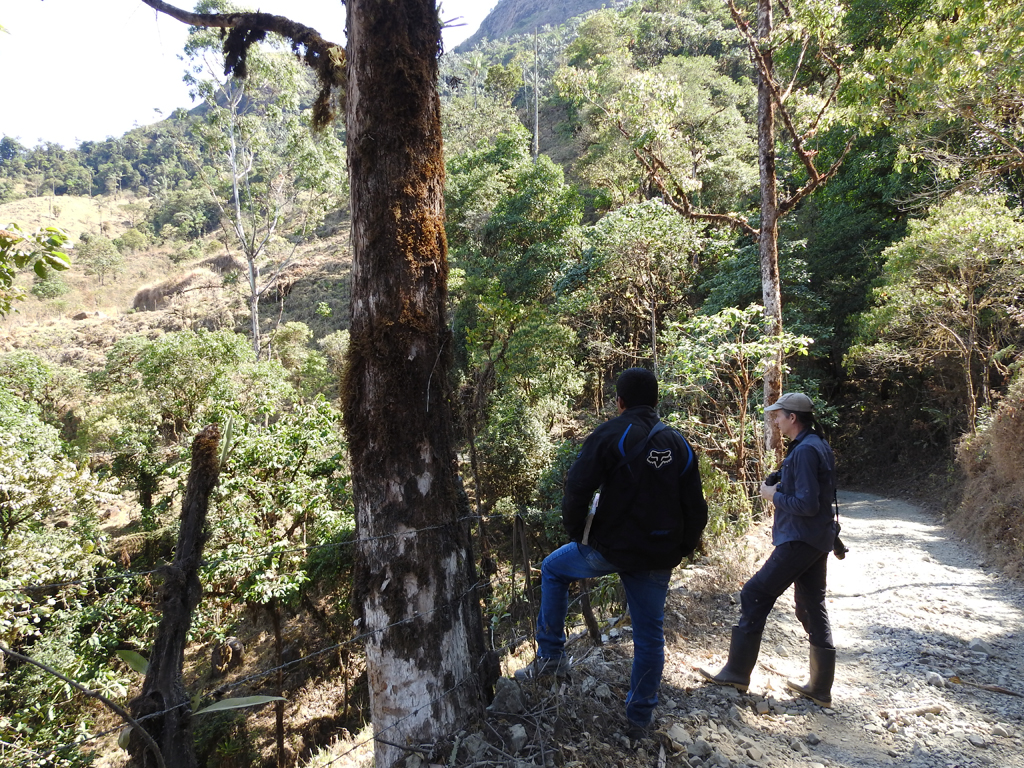 Leo and Uffe at one of the observation sites.