Time still flies here in Ecuador. Well, the actual time – the minutes and hours – are probably pretty much the same as back home, but it feels like it is just flying by. It has been almost three weeks since the last blog entry (here is the link if you have not read it yet Four weeks of Spanish lessons in Ecuador).

It not that there hasn’t been anything to write about the last three weeks, we have just been occupied by other things – and we have only had ver,y little internet access.

Currently, we are in southern Ecuador, more specifically in Reserva Buenaventura. We have left the coast – La Costa – and moved further inland and further up into the heights again – but more about that in a future blog entry. This entry is about our two weeks in Las Tunas and our volunteer work there.

After the four weeks of language school, we spent the following two weeks in a very small town called Las Tunas. The town is approximately 16 km south of Puerto Lopez, and everybody knows each other. The reason why we were in Las Tunas was that we were working – as volunteers –  for the organization Fundacíon Jocotoco. We were to do various tasks in connections with Jocotoco’s sanctuary, Rio Ayampe, and the work the organizations does locally.

Once again we stayed with a local family. It is a very sweet family consisting of three generations – Maria and Mario, their daughter Dahlia and her daughter Danni. No one in the family speaks English but they were very good at remembering to speak slowly when talking to us. Despite the language difficulties (I still think Spanish is hard) we believe that we understood quite a lot of what they told us.

There were also some birds in the family garden. There were many Blue-grey Tanager, Scrub Blackbird and the small parakeet Pacific Parolet. We saw frigatebirds and pelicans daily, flying over the garden, and one afternoon and old Peregrine Falcon also passed by. 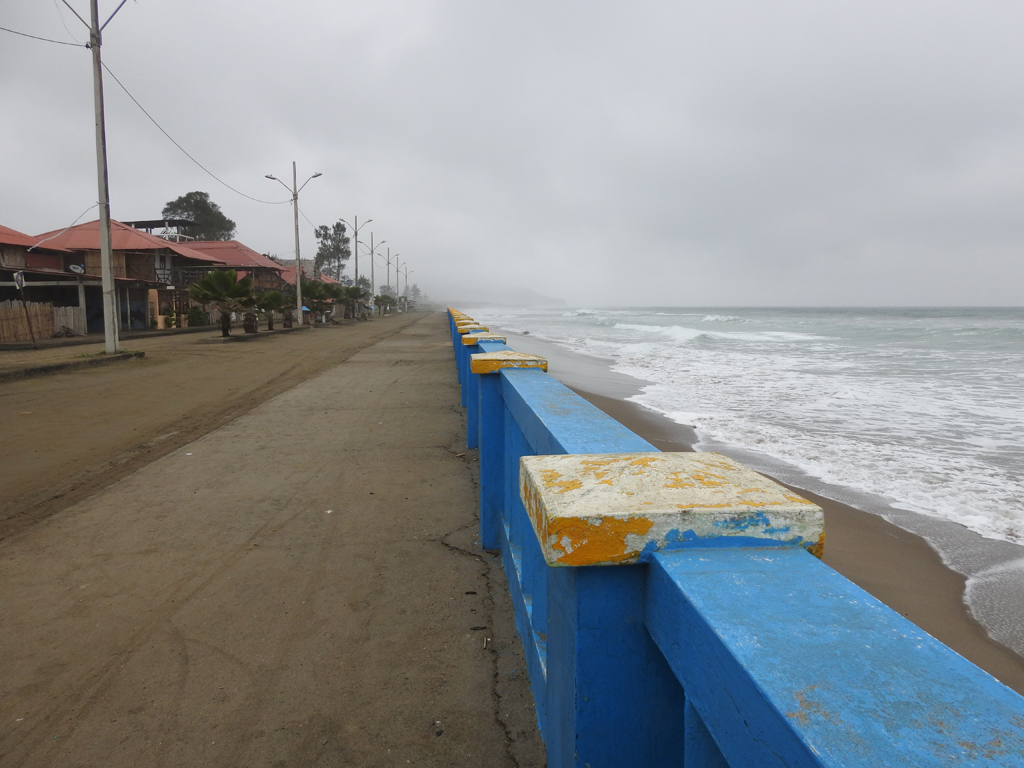 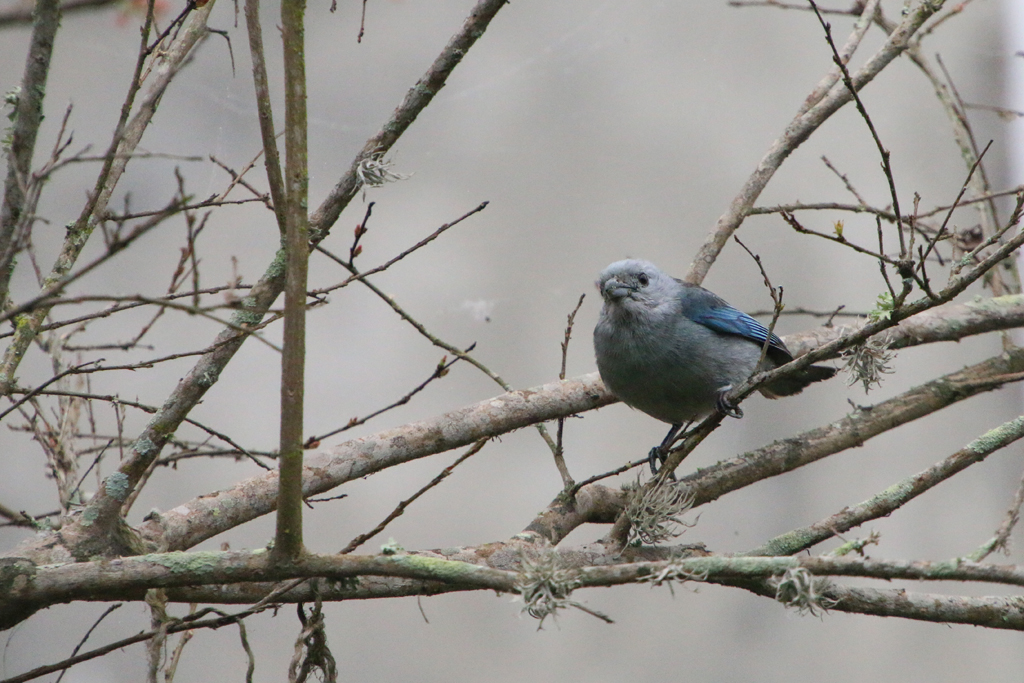 The Rio Ayampe sanctuary was created in order to protect the critically endangered hummingbird Esmeraldas Woodstar, which can only be found in a small area of Ecuador’s Pacific coast. The tiny woodstar is one of the worlds smallest birds, not much bigger than a bumble bee! Unfortunately, we did not get to see any as they move away from the area after the mating season – no one really know where it goes and very little is known about the species.

You can read more about the Ayampe Reserve on Jocotoco’s homepage if you are interested.

The two weeks we worked for Fundacíon Jocotoco involved various tasks. for example registering of birds, feeding the parrots, cleaning the aviaries and we were also in a plant nursery couple of times. We even worked as guides for four Canadians and we helped teach school children about nature. 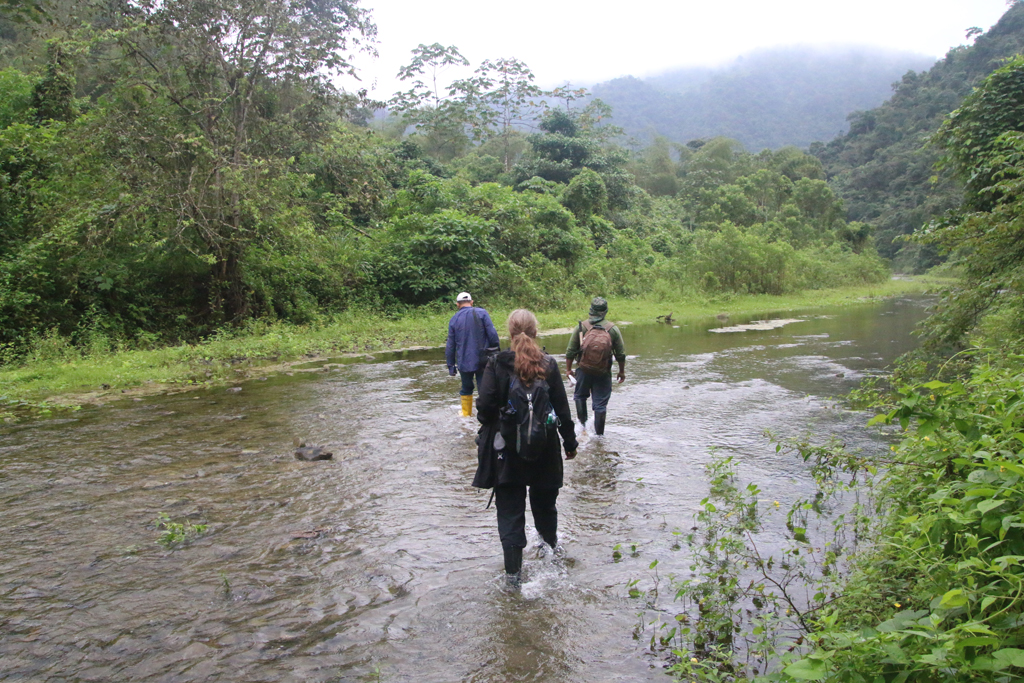 With a few exceptions, we were at the sanctuary every day, to help with the feeding of two guacamayos and the cleaning of their large aviary. The Guacamayo is a parrot, more specifically the Greater Green Macaw. This is another endangered species as its natural habitat – the forest – is being cut down and because they are caught and sold illegally as caged birds! 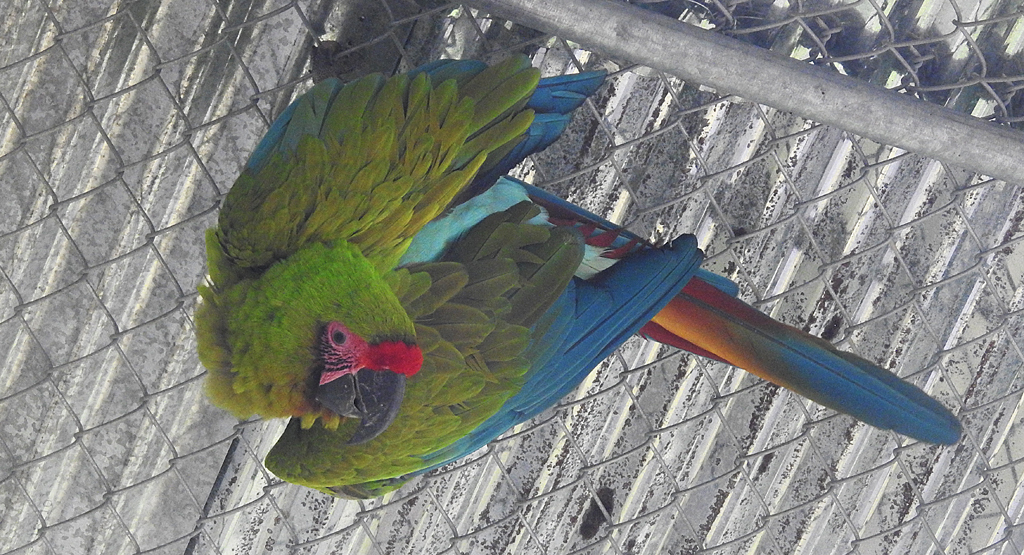 The work is part of a release project that Fundacíon Jocotoco takes part in, with the goal of re-establishing a wild stock of parrots in the area. The species disappeared from the area around Ayampe and Las Tunas about fifty years ago.

With the help of breeding work with captive macaws new hatchlings are raised, and when they are old enough, they are moved to the aviary in Ayampe to be prepared for a life in the wild. After a three months stay in the release programme the macaws are released in the wild.

In about a month six new macaws will join the release project in the sanctuary. 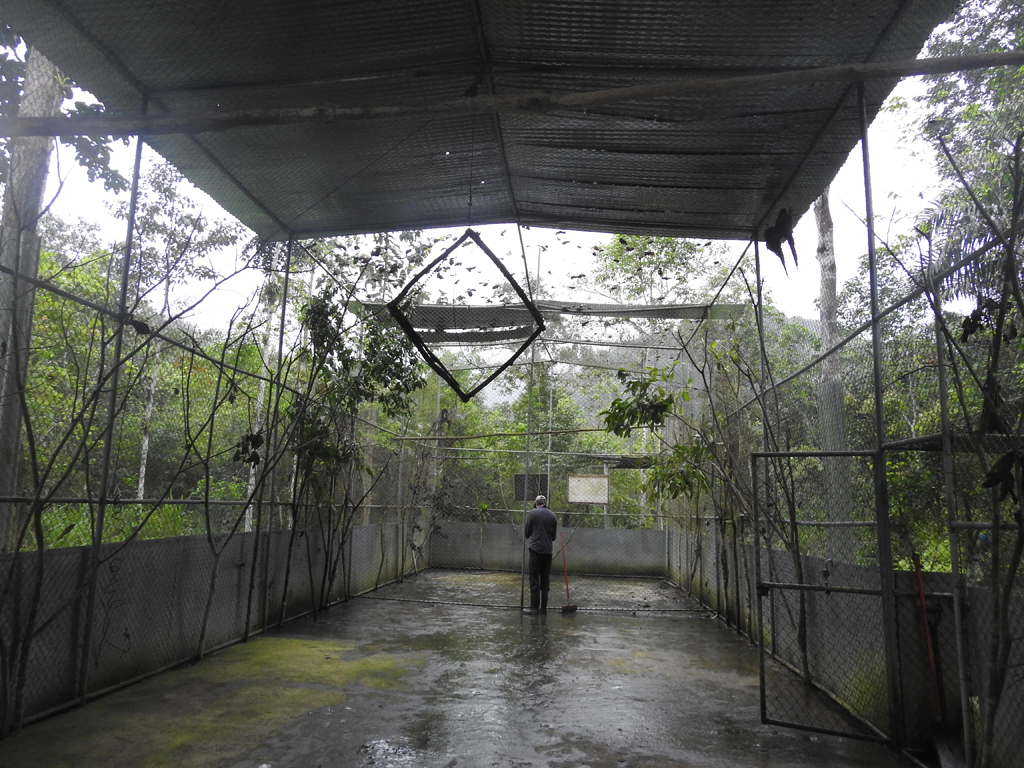 There are a lot of other birds in the reserve beside the two macaws. Fortunately, we had plenty of opportunity to experience this. From Ayampe there are three kilometres to the aviary. You can go by car most of the way – four-wheel-drive recommended. The last kilometre you walk on a narrow and muddy path through the rainforest. On the way you cross the Ayampe river four times, so a sensible pair of rubber boots are a must.

The days when Byron came along (Jocotoco’s local coordinator for the sanctuary), we drove in his four-wheel-drive on the muddy road through large puddles up to where the path began. The other days we walked together with Rene all the way from the town. It was, as mentioned, a three kilometre walk, but of course, we also had to go back again. Rene also works for Jocotoco and works with the parrots, does bird counting and a number of other things – and he knows the birds on their song/voices. This is really great when there are a lot of different species that either look- or sound-alike, and when they are hard to find or you just don’t know what you are looking at.

None of the trips were the same bird-wise, we experienced something new each time. There are of course some species that are more common than others and which we would see or hear each time – f.ex. Tropical Kingbird, Variable Seedeater, Scrub Blackbird and Black Vulture.

But there are also the ”difficult” species, and the rare ones. In tropical rainforests, you always hope to find a mixed species flock, on their way through the forest looking for food. Or you hope to find a colony of ants as they attract birds who eat the insects scared up by the ants. 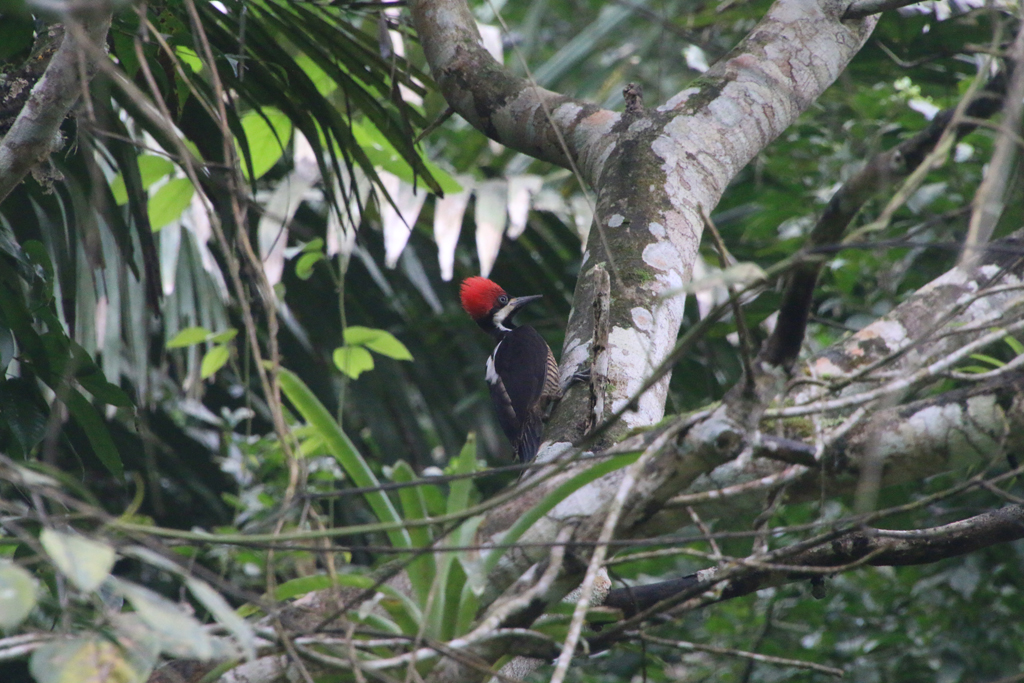 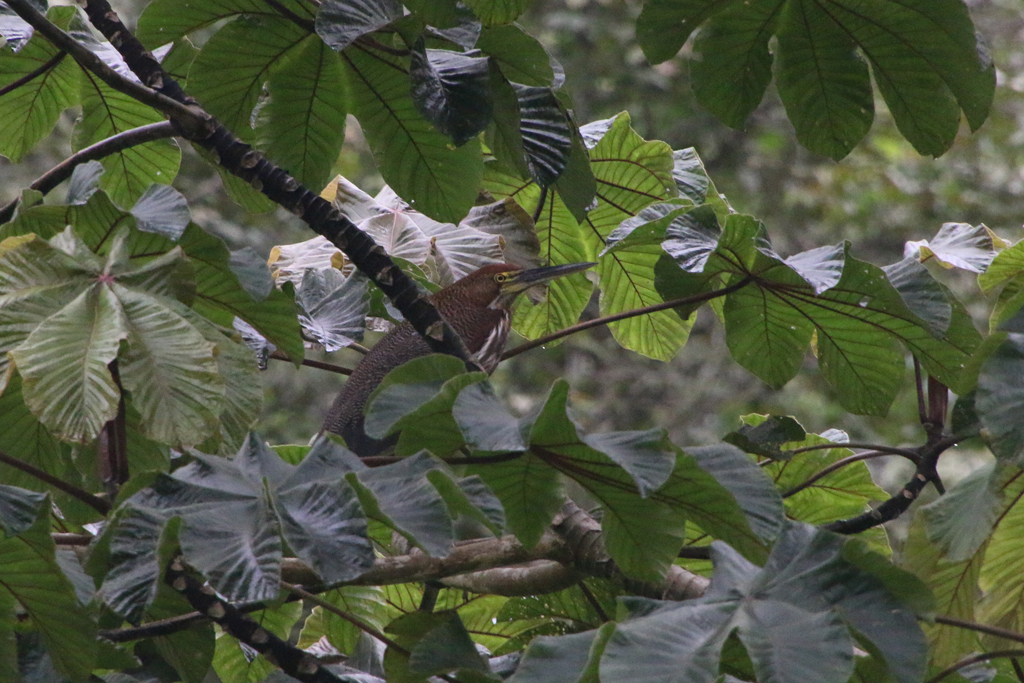 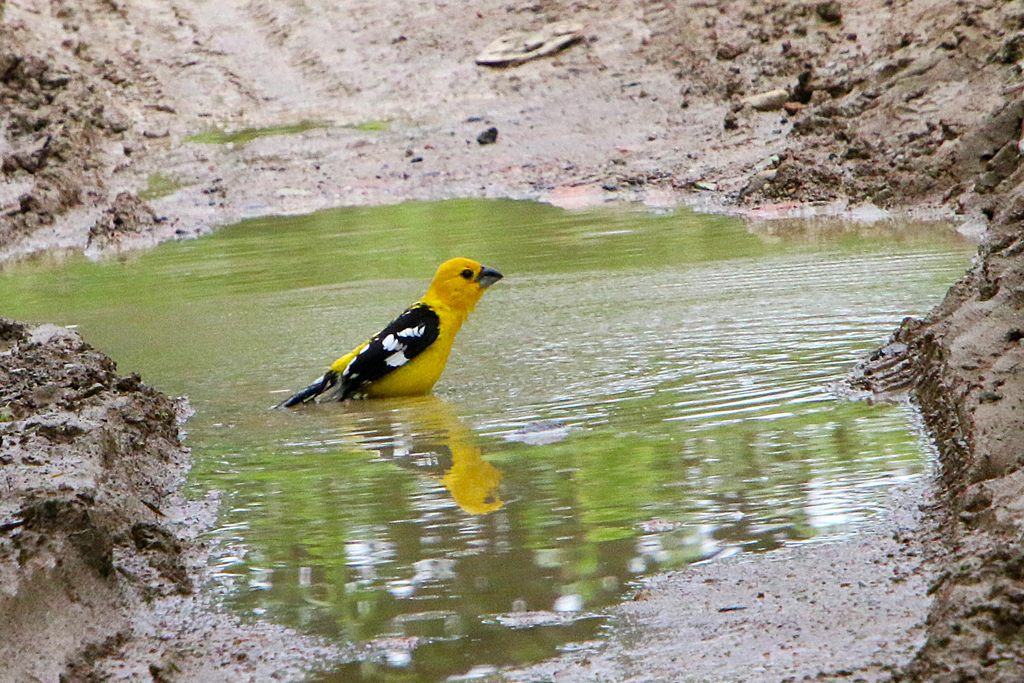 There were also a lot of other species, but we will spare you from having to go through the long list. However, we do want to mention that we also went birding at a wetland area near Ayampe. A nice little spot with six speccies of heron, some ducks –  f.ex. ten Black-bellied Whistling Duck, which was a new species for the area. There were Masked Watertyrant and some waders/shorebirds . Down by the beach thre were several resting Lesser Nighthawks which are a New World species of Nightjars, and they are cryptically colored so most of them we didn’t see until they took flight when we got within a few meters from them. 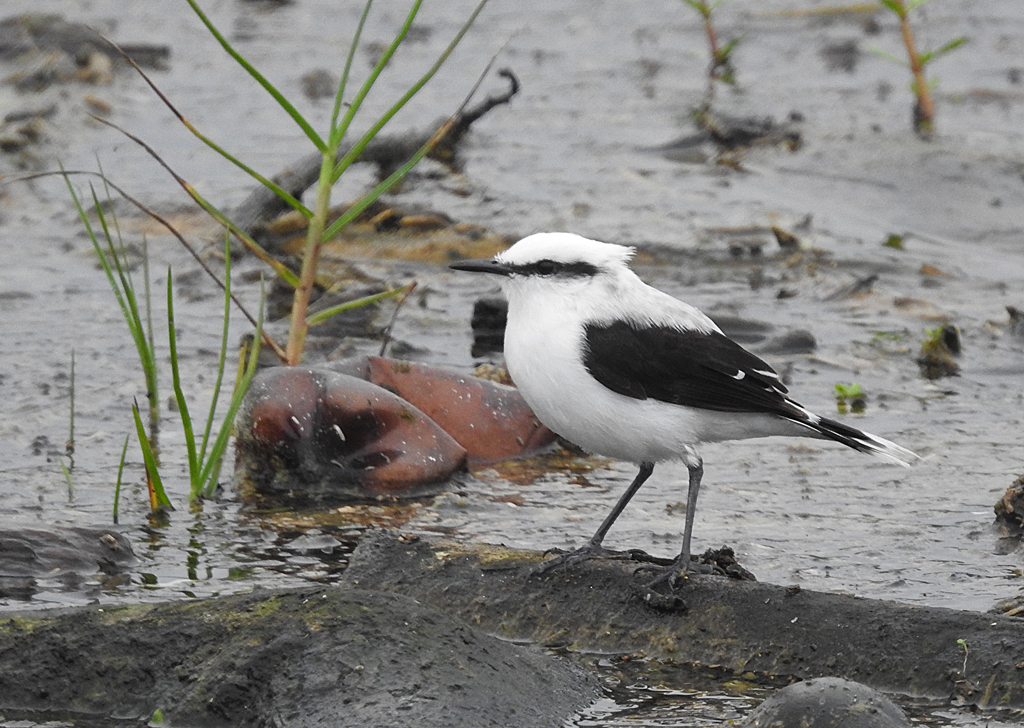 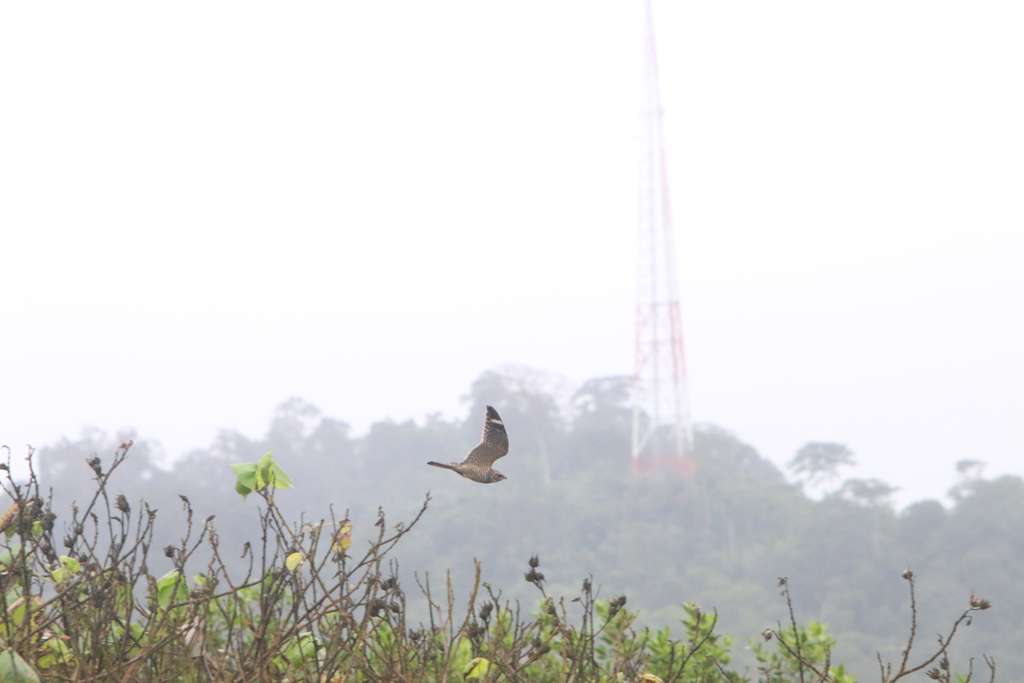 My name is Ara and I am an Guacamayo

We visited to different schools and taught the kids – or that is to say, we mostly helped passing out books and taking pictures and shooting video. It was Byron and Rene who were in charge of conveying the important message. They also read a short story about Ara the guacamayo to the children. It is a sad story about a macaw that is caught and put in a little cage. Luckily it has a happy ending as the parrot is released into the wild again.

It was a lot of fun to be part of and to see how the children reacted. It was also interesting to experience how the school system works in Ecuador, it is very different from how it is in Denmark – but that is a different story. When the kids were told that they would get a book (where they were also supposed to draw and color parrots) they got so excited that they almost couldn’t wait. They also got a certificate which said that they were now ”protectors of the guacamayo” and a class photo was taken. 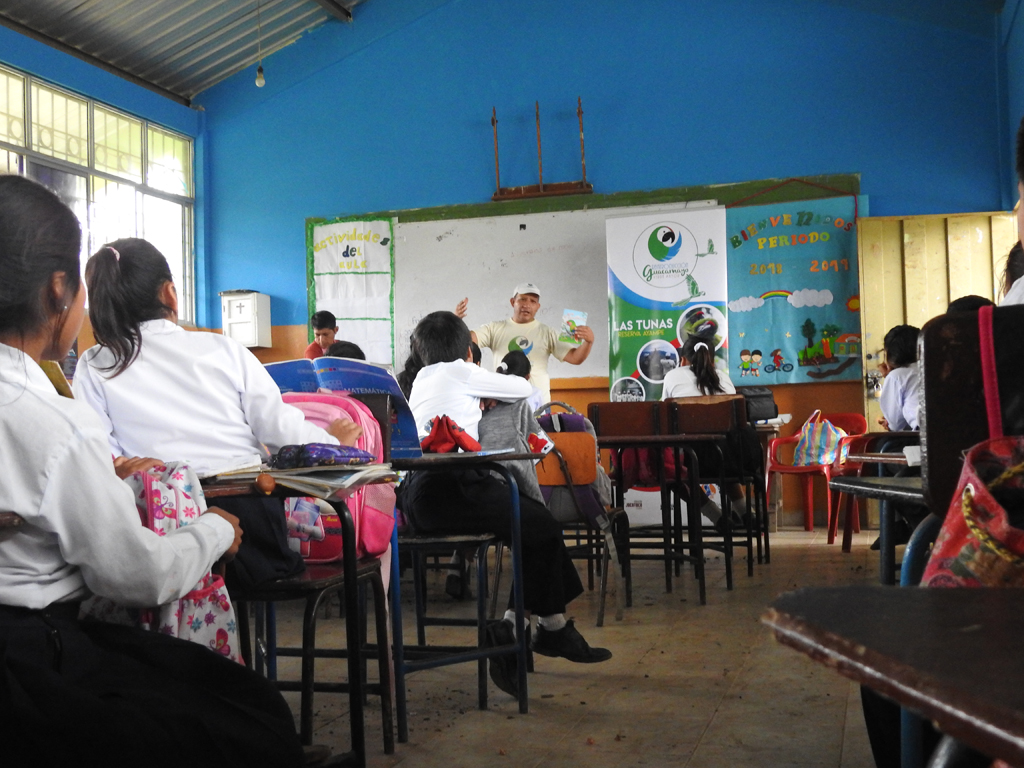 Happy school children whos has been learning about the Guacamoyo (Greater Green Macaw).