Early beginning of the day

It was still dark as we set off together with our guide Juan Carlos and our driver Carlos. It was five in the morning and we were going to Refugio Paz de las Aves to visit the famous lek (dancing area/performance area) for the Andean Cock-of-the-rock.

The drive from Bellavista Cloudforest Reserve & Lodge to the lek takes one hour. After our volunteer work at Fundacíon Jocotoco, we had allowed ourselves a four-day Birding Bonanza tour. This included a visit to Refugio Paz de las Aves. You can read more about our volunteer work in Las Tunas, Reserva Rio Ayampe, and Guacamayo the Ara or in Soil under the nails.

Actually, it isn’t very far from Bella Vista to Refugio Paz de las Aves (approximately 4 km as the birds fly) but this is the Andes. Most of the way we drove on the old and original road between Quito and Mindo. It is a long and winding gravel road filled with potholes – today it is known as the old Nono-Mindo Road or “the Eco-route” and it is primarily used by birders and the few local farmers who still farm the mountainsides.

There were already two other groups of birders and guides when we arrived. At six AM Angel Paz, who owns the area, also came, and we were allowed to walk the few hundred meters down to the shelter.

The lek, which is a group of trees, is visited by 6-10 Cock-of-the-rocks every morning (and also in the afternoon, I believe) where they perform their show, which consists of a kind of dance where they bow and flap their wings while emitting a lot of strange noises.

The Cock-of-the-rocks had already started when we came. We could clearly hear their strange voices and we could also see a few males. Most of the time they were partially hidden by branches up in the trees or because of the angle of your view from the shelter wasn’t very good. But we managed to see at least six males and two females before the show was over. 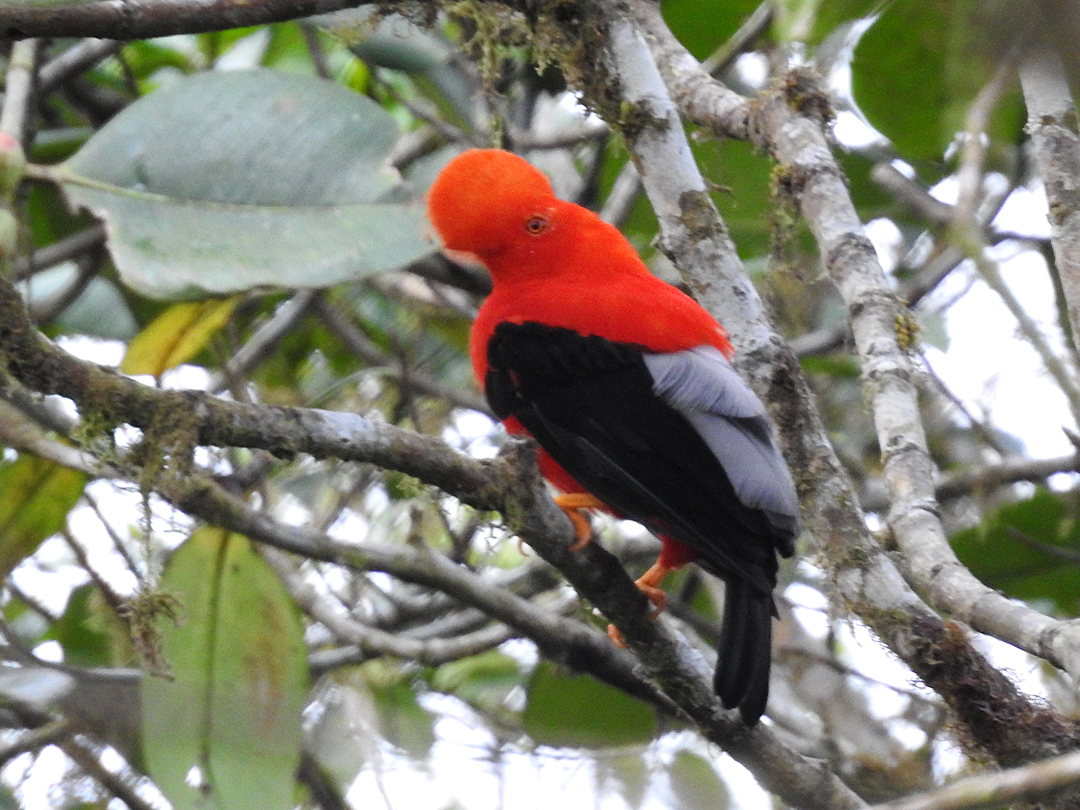 Maria and “The Antpitta Man”

Even though Andean Cock-of-the-rock is a very special bird, and it was funny to see the males showing off, it was the second bird séance of the day that we had looked forward to the most. The chance to see five different species of Antpitta!

Besides the Cock-of-the-rock-lek, Refugio Paz de las Aves is also famous for their antpittas. It is some funny egg-shaped birds with very long legs and a strong bill. You are much more likely to hear antpittas than to see them – in fact, they can be impossible to see even from a distance of a few meters – you have to lure them out!

And that is something Angel Paz, the owner, is very skilled at – it is not without reason that he is known as “The Antpitta Man”.

Three groups of birders followed Angel Paz up the gravel road. Besides a little clearing in the forest we stopped and got out of the cars. Angel started to put some worms and larvae in the little clearing while he whistled and called for Maria! For a while, nothing happened. It seemed that Maria – a Giant Antpitta – named after Angel’s wife, wouldn’t show up.

Suddenly a man further down the road called for us, it was Angel’s brother, Rodrigo Paz, who had shown up. There was some activity in the forest and we all hurried down to him.

After some more waiting, something finally happened. A large egg-shaped bird slowly emerged from the forest – Maria. And behind her, another appeared as well. Great! Two Giant Antpitta. After 5-10 minutes the two antpittas had had enough and disappeared back into the forest. 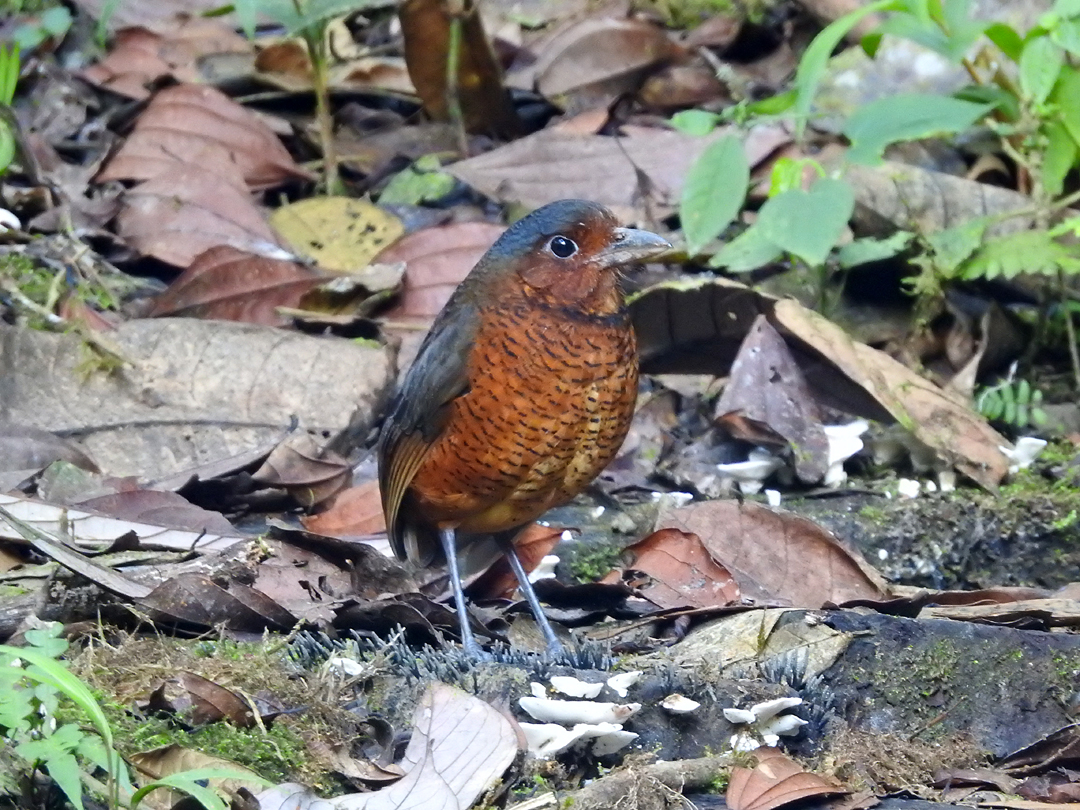 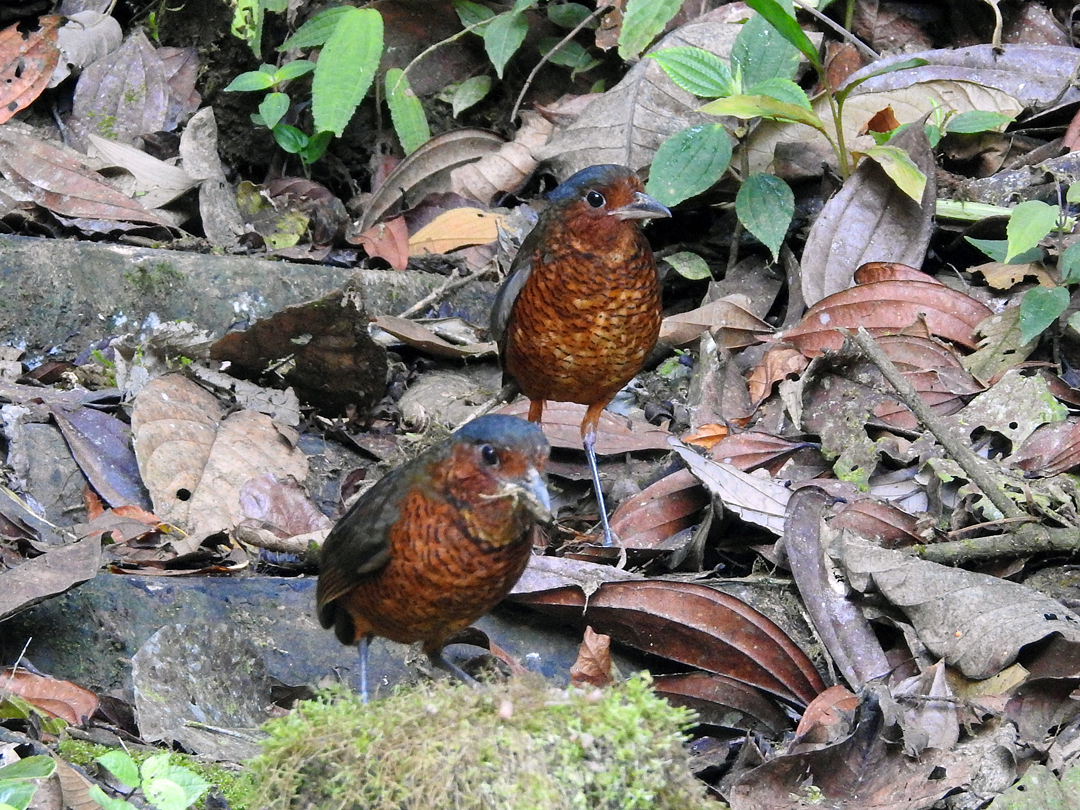 We then drove further up into the Paz family’s property, and where led into the forest to the remains of a fallen tree. Worms and larvae were laid out and again Angel whistled and called for the birds. This time we didn’t have to wait long before a beautiful Chestnut-crowned Antpitta appeared and ate a little, before disappearing again. Alright – Antpitta species number two. 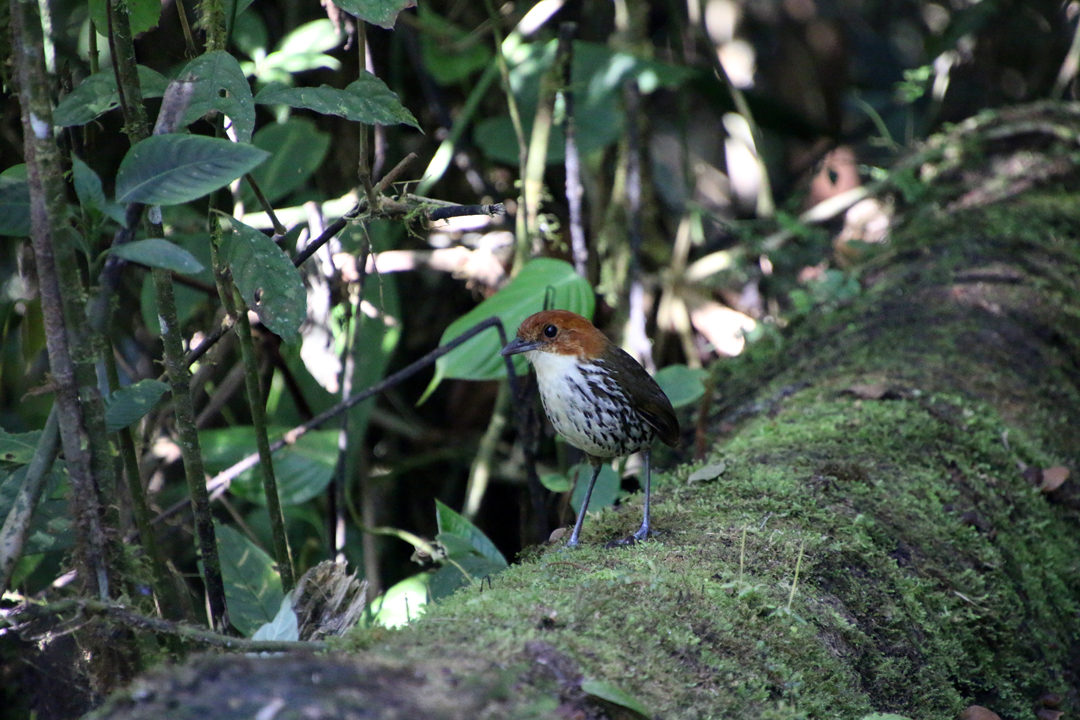 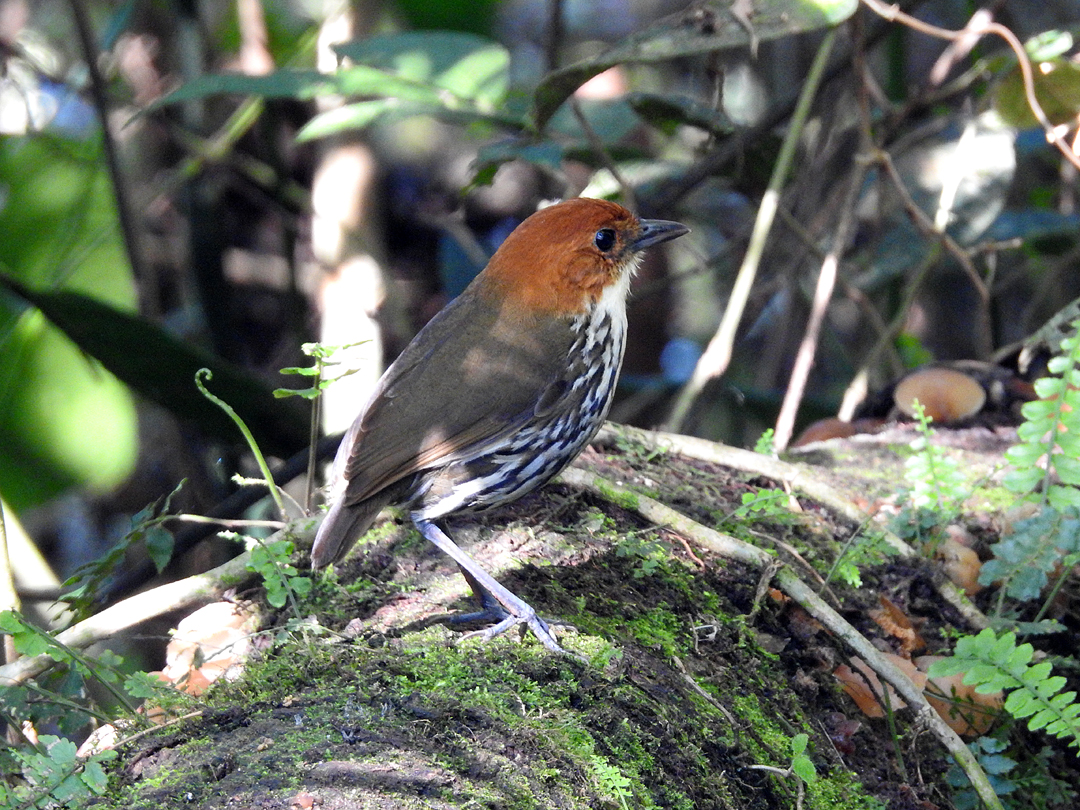 Not far from where we had seen the Chestnut-crowned Antpitta we were assigned a new spot to wait. Again some feed was laid out, and the birds were called. It wasn’t long before a Yellow-breasted Antpitta showed up. We now had three of five possible species, which was the number that had been spotted the previous day! 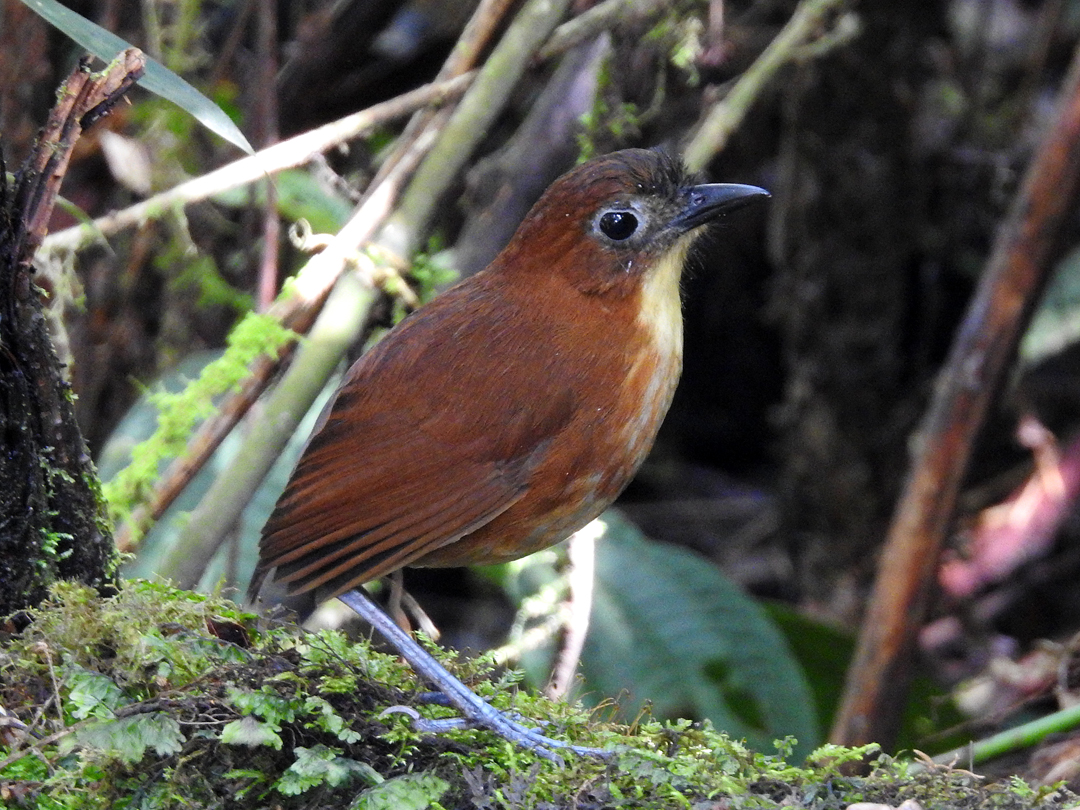 Still, two species to go. In order to see them – or rather – to attempt to see them, we drove down to the family’s lodge and parked the car. We walked down a narrow trail and found a place to wait. We were lucky and after only a few minutes, Susan – a Moustached Antpitta – appeared. It turned out that it had a young which it fed while we were there. 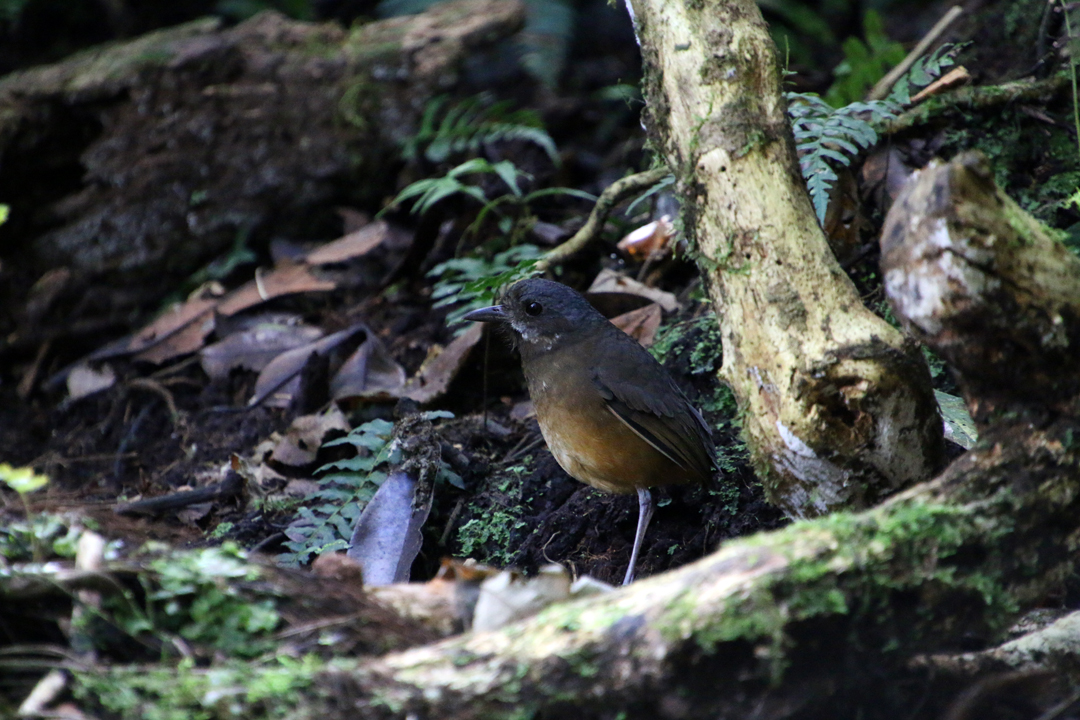 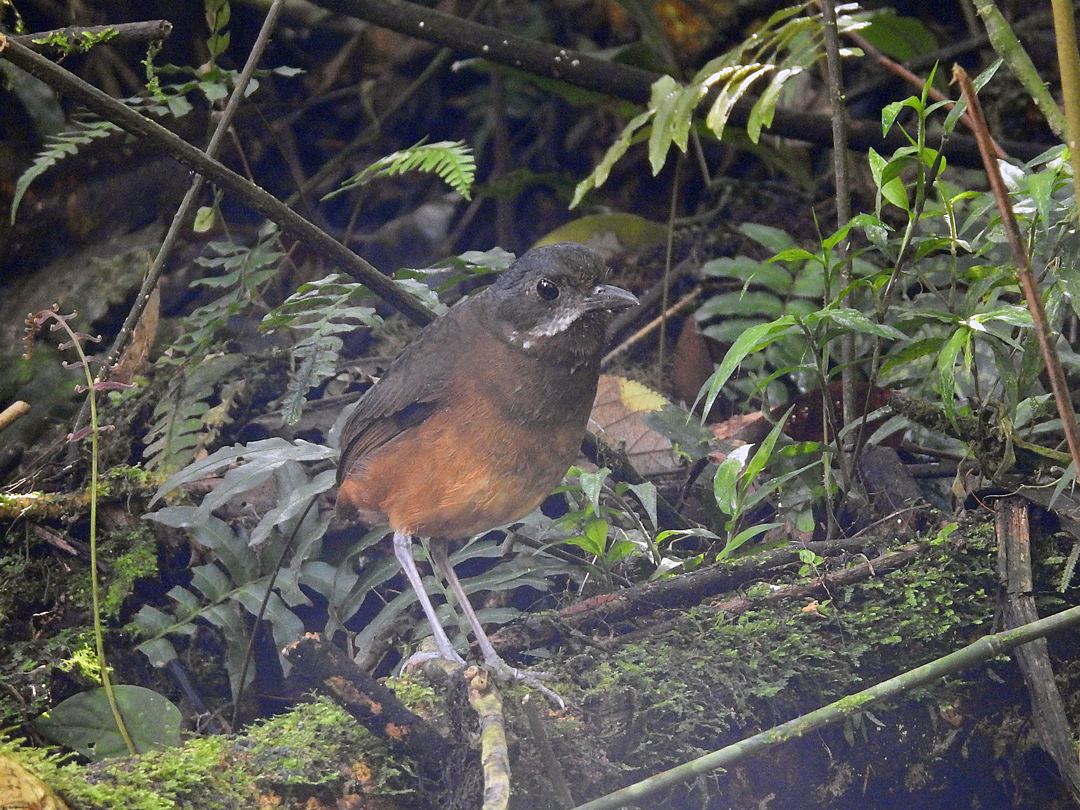 Rodrigo had gone a little ahead and sat and waved us forward, with a gesture that said “hurry” – the 5th and final species was there already.

Two small Ochre-breasted Antpittas, Shakira and her mate, sat a few meters from the trail. It was clear why the called her Shakira – several times it looked like she was shaking her hips.

We had a full house – casa llena – and it was an amazing experience. Both because antpittas are funny birds, but also because of the suspense and excitement and the good and cozy atmosphere we experienced. Not least of all due to the brothers Angel and Rodrigo who were always smiling and seemed to be genuinely excited about what they were doing.

It is an experience we can only recommend if you should find yourself in this part of the world. And as Shakira sings “Hips don’t lie” 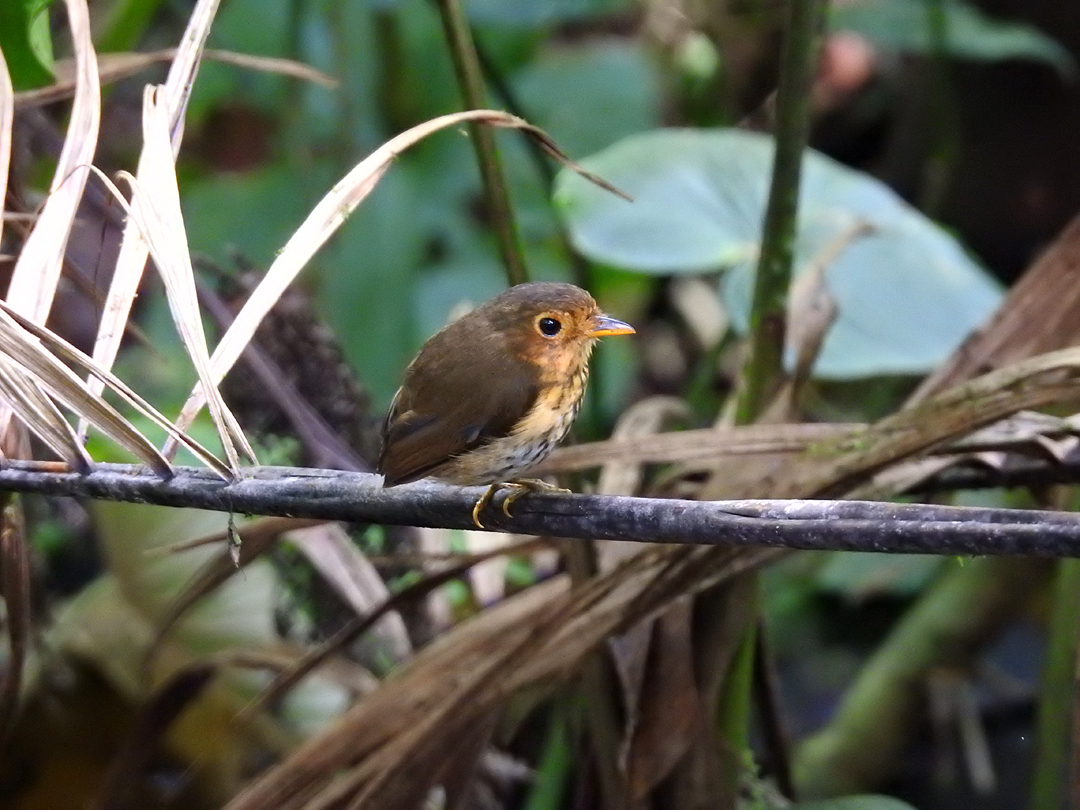 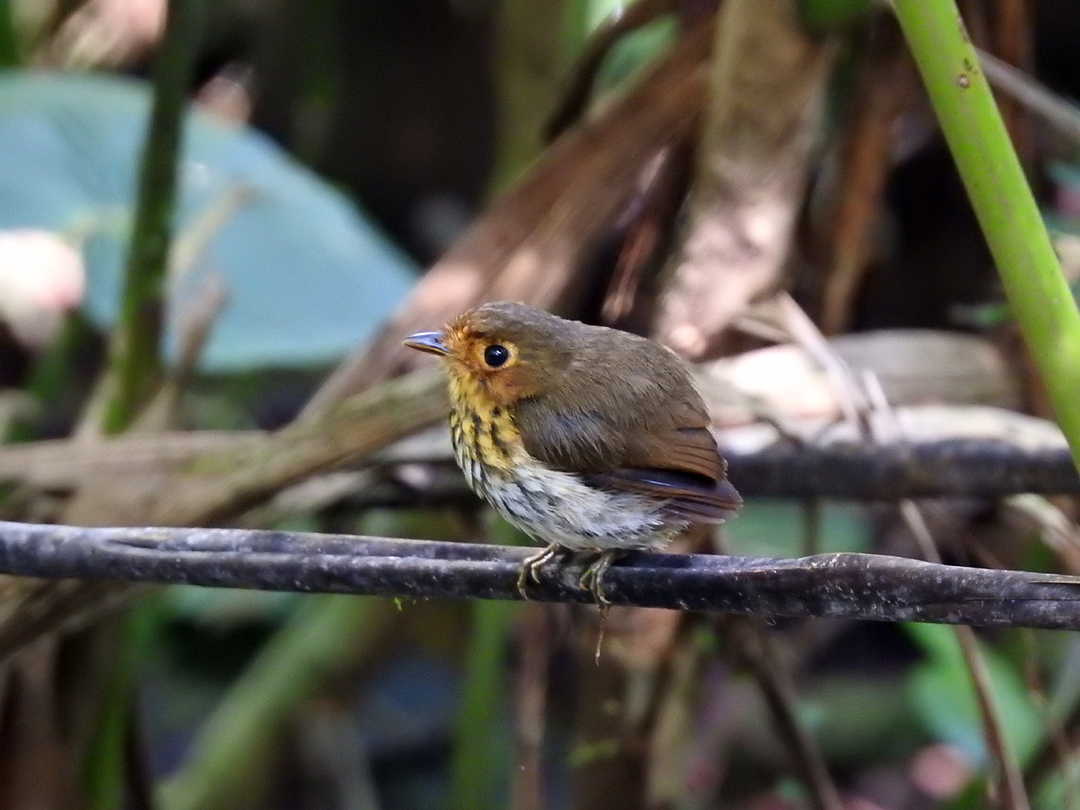 Antpittas belong to the family Grallariidae. The 55 species in the family live in subtropical and tropical parts of Central and South America. Antpittas are funny egg-shaped birds with a short tail, long legs, and a strong bill.

The species vary in size from approx. 10 cm to 25 cm. They live in the rainforests hidden in the dark of the forest floor. You hear the antpitta much more frequently than you see it.

Editors note: Updated d. 27-11-2018. Unfortunately, there was an error in naming one species of antipitta (Yellow-breasted Antpitta and not Yellow-bellied Antpitta).