Back in Bergen and what to do?

Back in Bergen and what to do? As the post title indicates it was not our first visit to Bergen. For many years ago – more precisely 19 years – we were exchange students at the University of Bergen. Actually it was back then we started blogging (read more here) about what we did when we lived in Bergen for almost a half year. This time we stayed for three nights before the Easter 2018.

So back in Bergen and what to do? We had an idea and if you continue reading you’ll see what we think you can do in Bergen.

We had a late Sunday flight from Copenhagen with Norwegian. But due to a delayed departure we arrived very late at Bergen Airport shortly after midnight. The airport is located in Flesland south of Bergen so you can either take the newly opened light rail Bybanen to city centre or you can take the airport express bus Flybussen. You can of course also take a taxi but that is quite expensive. The last light rail train was departed and we barely reached the last bus for the night. At Torget we got of the bus and after a short walk we were at Hotel Hordaheimen Best Western Plus. Where we should stay the following days.

Usually it rain in Bergen or at least it very often rain so don’t forget your rain gear. But Monday morning the sun was shining. The temperature was below the freezing point but fortunately there was no wind. We decided that the first thing to do was to head up to Fløyen. Uffe was busy at Fløyen.

Fløyen or Fløyfjellet, is one of the seven mountains surrounding Bergen and it is one of the most popular attractions, not only for tourists but also the locals. It is 399 meters above sea level and on clear days you have an amazing view over the city and the fjords. It is a must go. Instead of using the famous Fløybanen we walked the 3 kilometers to the top as we often did when we lived in Bergen. Not only is it a nice walk it is also free exercise. Parts of the path was covered by snow and ice so you needed to walk with care.

After an hour we reached the top –  you can do it faster if you go for the exercise. The view is exactly as beautiful as we remembered it. We took the mandatory photos and soon Uffe also was “hired” as a photographer for some of the other visitors. But we’re not sure about the business case, it did not pay very well infact not a single krone.

The weather changed to more cloudy and it was cold and because of the icy condtions we chose to take the Fløybane down from the mountain. Back down in the city we went for a walk between the old houses of Bryggen. Since 1979 Bryggen has been on the UNESCO list for World Cultural Heritage sites and is one of the most famous attractions in Bergen and you will find some souvenir shops there. It was already past noon but apparently that was still early since we had it more or less for ourselves. We appreciated that because it gave us better opportunities to take photos of the old buildings without a lot of peoples. In 1999 our study was a major part of our life. We were back in Bergen and what to do? Of course we would revisit the University of Bergen. Most of our courses were held at Merinobygget and this is actually located at the Norwegian School of Economics (Norges Handelshøyskole, NHH). Back then we had an introductory geology course at the Natural History Museum. The Museum was undergoing a major restoration and was closed. We had to do without the old showcases with stones, fossils and the stuffed birds and animals. Instead we visited the Museum Garden there is a nice and quite place if you need some quite time away form the noisy city center. As you probably know we like listening to music and we like live music. Unfortunately there were no concerts at the music venue Hulen while we were in Bergen this time. But that did not prevent us from going to see the place from the outside and thinking back to 1999. It is a really cool venue build into the mountain. You can check their upcomming events here. The entrance to Hulen

Another great thing to do especially when it is cold and your legs need a rest from walking the streets or mall cruising is to go to the library. And Bergen Offentlige Bibliotek is at very fine place to go. Find yourself a chair and get comfy with a book or a magazine and take a break. They even have a café so you wont miss out on coffee. And bring your charger they have plenty power outlets to give some juice to your phone.

Food you will need and you will have plenty of choices i Bergen. There are many restaurants covering different food styles from italian, african or norwegian food. We went to Bare Vestland  a very nice and “hyggelig” place that serves tapas made from local produces. And they have a large beer list. We had the four course menu and this was very good. You can check their homepage here. We woke up to snow! This is late March and was not exactly what we expected. But we were still back in Bergen and what to do? Take the light rail Bybanen to Fantoft and see the dorm where we lived when studying in Bergen. It took about 20 minutes to get from Byparken to Fantoft. There was no light rail in 1999 and it turned out that the station was right at the college. It was fun to see that it look exactly as back then except from the light rail and some new buildings in the area. This morning it all looked grey and dull and you couldn’t see Løvstakken as it was completely covered in mist clouds. While in Fantoft we took the short walk up to Fantoft Stave church. Our old front door in Fantoft. 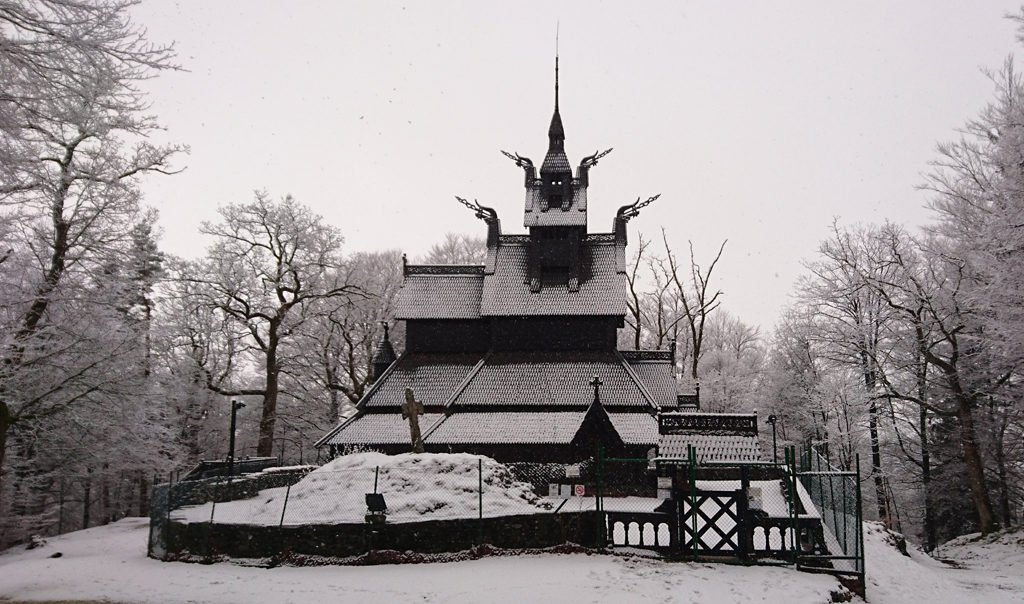 You can now easily access the lake Tveitevatnet. You just get of the Bybanen at Sletten station and you are right at the lake. And what to do? Go birding. It is mostly gulls and some ducks and a lot of feral pigeons that people feed with old bread. It was at Tveitevatnet that Alf Tore a local birder showed us a young Ring-billed Gull in 1999. Not that we expected to see one this time… but if you don’t look, you for sure wont see one. And for a very brief moment we actually saw a young that at first glance looked like a Ring-billed Gull but it wasn’t. The University at NHH

At lunch time it didn’t snow any longer and the sun could shine through the clouds. We had lunch at Christies Café at the university. A good place that was not crowded when we where there – maybe because of the Easter holiday.

In the afternoon we took the bus to NHH – the Norwegian School of Economics. Now we would see Merinobygget where we had most of our courses as mentioned above. We got of the bus, the sun was shining from a clear blue sky. The walk down the steep trail behind NHH leading down to Merinobygget was as we remembered it. But the Merinobygget now looked very closed and unused. There where not much to see so we didn’t stay long. The weather was sunny and calm so we decided to take a walk throughout Nordnes, the peninsula pointing out to the west of the city center. We were not the only ones enjoying the sun in the area of the Aquriaum. On the rocks we saw seven Purple Sandpipers roosting on the seaweed.

Later we had a cold beer at the indoor Fisketorget (don’t remember the official name) while enjoying the view to a late afternoon sunlit Fløyen.

Nordnes was also the theme of the night – well, we had dinner at a restaurant located there but the theme was African or more precisely Eritrean. The restaurant is called Horn of Africa and is run by a sweet Eritrean couple. It is a very cozy place.

The food was served by the smiling owner with the words: ‘Are you ready for the evenings surprise?’ followed by ‘You will eat with your fingers’ and again a big smile. After a short crash course ‘How to eat Eritrean food’ we were let alone with a big dish with six different very tasty looking dishes. And it was really good and authentic. We finished with Ethiopian coffee roasted just before serving and then served with popcorn! Yes that one we didn’t see coming. We were told that original the coffee would be served with salt for some reason that nobody really knew. It was fine but the coffee was very strong and we got a little worried if we could fall asleep later. Etiopean coffee served with popcorn at Horn of Africa.

Final day in Bergen. We were in no rush while our flight back home to Copenhagen was in the evening. It was again a sunny day and there was still no rain in the weather forecast. We were in no doubt that it meant another hike up to Fløyen. But before we ‘climbed’ the mountain we walked to Bergen train station to temporarily store our luggage – no need to bring all our things up to Fløyen.

En route to the train station we made a stop at an outdoor shop that had just opened for the day. We didn’t buy anything – not that we couldn’t find anything interesting – but we had no room to bring it home. After a cup of coffee at Fløyen and after some time watching other people we walked down to the city center. We were hungry and because this trip to Bergen was a kind of a walk down memory lane we went to Pizza Hut near Torgallmeningen og Byparken. When we were young and students this was the place to eat – ‘all you can eat for not that many money’. Actually, back in 1999 we only went there to eat once or maybe twice. We mostly had home made food, no need to use money at expensive restaurants.

For the rest of the day we were shopping. Uffe’s dad was turning 80 next day and we were going to celebrate him so we needed a present. After visiting many shops we finally bought some nice t-shirts we hoped he would like and fit. Then we went hunting for some ‘dunjakker’. It seemed that every one else in Bergen had a coat with down, so of course we needed one too. We manage to get one for Bente and the best one was also the cheapest and found in one of the tourist shops at Bryggen.

A nice long weekend in Bergen had ended. We picked up our luggage and jumped on the Bybanen train all the way to the airport.